obsessions of an otome gamer

By Natsu and Shoyu. Released in Japan as “Ongaku de Otome wa Sukuenai” by the author on the Syosetu website. Released in North America digitally by Cross Infinite World. Translated by Charis Messier.

The first volume of Obsessions of an Otome Gamer stunned me, both in how ridiculously long it was and also how much I enjoyed it. This second volume is not QUITE as long, though it’s still about the length of a Tanya the Evil novel. But more importantly, it develops the characters from the first book, seeing them realistically learn from their mistakes, grow and mature… well, at least as much as they’re allowed to. Even when cliches are brought in, such as the rich younger sister of one of their teachers, they’re subverted, as she turns out to be a sweetie pie rather than an “ohohohohohohoho!” sort. And of course there’s the music, as Mashiro continues to have piano, not love, as her primary focus and gives the reader a crash course in classical music as well. That said, love is creeping in there, and the volume ends in a cliffhanger that will actually be decided via poll. 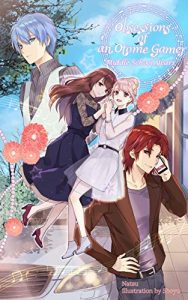 The title font is slightly more readable than the first volume, though I still think pink and white against a light background needed rethinking. As for the content, well, it’s Mashiro in her middle school years. After the events of the last book, Sou is in Germany, but he still hasn’t forgotten Mashiro, and she’s writing him and sending him origami trombones (far less origami in this book, alas). Kou, meanwhile, is also recovering from the bad impression he has seemingly hammered permanently into Mashiro’s mind, and I give him credit for being incredibly patient and trying his best to get back in her good graces. Since the first book came out, I have read three volumes of My Next Life As a Villainess, and it’s interesting to contrast Mashiro with Katarina. They’re both in otome game worlds and tend towards the dense when it comes to love, but Katarina is able to heal everyone’s problems through the sheer force of being her, whereas Otome Gamer is not that idealistic.

The author notes that the original title for this story was “The Maiden Can’t Save Through Music Alone”, and that brings me to Kon and her story. It’s dramatically necessary and worth it, as otherwise this sort of story would be as light and frivolous as they come, but it really is hard not to imagine that, whichever boy Mashiro ends up with, Kon is going to die. In her previous life she essentially sold her soul to Satan, and he’s in this book enjoying her despair and torment, despite the occasional setback (Mashiro recovers her past-life memories because, due to the game mechanics, she and Kon have maxed out their love and trust in each other). I would love to be proved wrong, but even Mashiro’s narrative has a lot of “I didn’t know it at the time, but…” that almost always signifies someone’s doomed. This sucks, I love Kon.

There are books for both boys being prepared, and there’s a poll that the publisher has put up so that readers can vote for which one gets published first. No, there isn’t a Kon Ending that I know of, though I do wonder if we’ll see a Bad End as an extra. In the meantime, fans of the first book and novels in this “otome game reincarnation’ genre will want to read this as fast as possible. And hey, why isn’t the publisher creating playlists of the songs for Spotify?

By Natsu and Shoyu. Released in Japan as “Ongaku de Otome wa Sukuenai” by the author on the Syosetu website. Released in North America digitally by Cross Infinite World. Translated by Charis Messier.

I’d never really read a Cross Infinite World novel before now. They specialize in both novels geared towards young women and also going directly through the author, i.e. most of the books published were published on the Syosetsu original fiction website, or various equivalents, rather than going through a publisher. (That said, the author has had published work as well.) But nothing had really caught my attention until the announcement of this series. I love visual novel-style storytelling, and I love classical music, so I was delighted to see the two combined. As I started to read the book, I was expecting things to be very light and fluffy, with the occasional warped sense of humor. I was surprised at several plot and character choices the book made, though. I was even more surprised by a plot twist that I will do my best not to spoil (yes, really) about one-third in. And I was not surprised but a bit taken aback by the length. This book is HUGE. 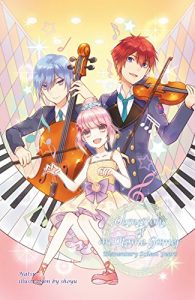 One thing that surprised me was the decision to have the entire book take place when our reincarnated heroine, Mashiro, is between the ages of seven and twelve, something that I blame on the light and hard to read font on the front cover, which meant I missed the subtitle. She’s the reincarnation of Rika, a young woman who was obsessed with an insanely difficult otome game called Hear My Heart, where you not only had to make the right romantic choices with regards to the two guys (one outgoing and arrogant, one sullen and introverted), but you also had to compose music – and if the music wasn’t good enough, you failed. That’s a high bar to clear. She then sees a poster advertising a remake of the game… and falls into an open manhole and dies. (This would be the warped sense of humor I mentioned above.) As Mashiro, she recalls her previous life when she’s seven years old and just your average elementary school girl who folds origami of Angkor Wat in her spare time. Now she’s in the game world, and has met Kou and Sou, the two heroes, as young boys. But is the game world what she really wants from life?

While Mashiro is eighteen years old in her head (at times – it’s lampshaded that this isn’t consistent, and is actually an important plot point), she and the two boys are young kids, and despite the occasional schoolkid flirtation, the book maintains those boundaries. Of course, this doesn’t mean we don’t get a heartfelt confession or two, but you may relax and not have to worry about kiddie makeouts. There’s also a heavy emphasis on classical music and piano, as Mashiro burns with a sudden desire to learn the piano, at first because she wants to meet the guy she liked from the game, but her love rapidly becomes genuine and all-consuming. The book helpfully tells us the names of the pieces she’s working on, and you could make an excellent Spotify playlist if you liked. Mashiro is a prodigy, though she may not be aware of it. And there’s also that spoiler, which revolves around her best friend Kon, who is Kou’s sister – and also reincarnated into this world from a previous one. Mashiro only has memories of the first version of the game. Kon played the remake, but not all of it. Is she really what she seems? And can Mashiro really avoid being a heroine?

The writing and plotting can get immensely wordy at times – I understand this was actually edited down from the original text, but it’s still super long, about twice the size of your average light novel. That said, I never found myself counting pages till it was over. Mashiro is a fun heroine, savvy when needed, clueless also when needed. There’s also a surprisingly deep look at how reincarnation into another world would work when you retain some of your own memories. The book ends with Mashiro graduating and moving on to Middle School, which I imagine will take up Book 2 of the series. If you’re looking for a nice romantic book with hidden depths, or love shoujo and visual novels, this is a fantastic read.