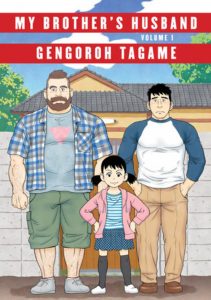 Yaichi is a single dad who works from home managing the rental property his parents left to him and his brother, Ryoji, after being killed in a car accident when the boys were teenagers. He considers his real job to be providing the best home he can to his daughter, Kana. On the day the story begins, Yaichi is expecting a guest—Mike Flanagan, the burly Canadian whom Ryoji married after leaving Japan ten years ago. Ryoji passed away the previous month and Mike has come to Japan to try to connect with Ryoji’s past and see for himself the many things he’d heard stories about from his husband.

Initially, Yaichi is reserved and wary around Mike. It’s not to his credit that the first thing he thinks when effusive Mike moves in for a hug is “Let go, you homo!,” though he at least mostly keeps a lid on his feelings. Mike is never anything but lovely, and Kana quickly comes to adore him. It’s through her openness and innocence, untainted by prejudice, that Yaichi comes to rethink some of his actions concerning Mike. Why did he hesitate to invite Mike to stay with them, when he’d recently insisted a visiting cousin do the same, for example? Kana is able to ask Mike things that Yaichi feels unable to, and he benefits from Mike’s super-patient explanations, eventually realizing how wrong he’d been about various aspects of the gay experience.

Not only wrong, in fact, but willfully ignorant. When Ryoji came out to him as a teenager, Yaichi didn’t object but never talked about it with him, either. He never considered how difficult that conversation was for his brother, or what other kind of turmoil he might’ve been experiencing. Too late, he’s realizing that he missed the opportunity to truly know his brother. I did appreciate that Yaichi is willing and able to recognize his own failings, and that he vows to protect Kana from others’ negative opinions about Mike and from being as closed-off as he was. True, he’s still not able to introduce Mike to an acquaintance without downgrading his relationship to Ryoji, so he’s got a ways to go. But at least he is headed in the right direction.

“Heartbreaking yet hopeful” is how Anderson Cooper describes My Brother’s Husband in his endorsement blurb, and he is definitely right. Melinda also wrote movingly about the series in our latest Off the Shelf column.

My Brother’s Husband is complete in four volumes. Pantheon Books is releasing the series in two-in-one volumes.

From the back cover:
Middlesex tells the breathtaking story of Calliope Stephanides, and three generations of the Greek-American Stephanides family, who travel from a tiny village overlooking Mount Olympus in Asia Minor to Prohibition-era Detroit, witnessing its glory days as the Motor City, and the race riots of 1967, before they move out to the tree-lined streets of suburban Grosse Pointe, Michigan. To understand why Calliope is not like other girls, she has to uncover a guilty family secret, and the astonishing genetic history that turns Calliope into Cal, one of the most audacious and wondrous narrators in contemporary fiction. Lyrical and thrilling, Middlesex is an exhilarating reinvention of the American epic.

Review:
I don’t normally go in for multi-generational family epics, and I still think the basic concept is a boring one, but in Middlesex it’s handled in such a way that it’s all leading up to some revelations made in the first paragraph and explains how they came about. About halfway in or so when I discovered I was enjoying the sprawling epic, I looked it up and found that it had won the Pulitzer Prize for literature. I think it’s well-deserved in this case.

Although I do own a paperback copy of Middlesex, I actually listened to an unabridged audio recording read by Kristoffer Tabori, who was excellent. The language is not exactly florid, but it is pretty detail-rich. It might’ve been annoying to me if I were looking at it on a page, but Tabori adopts a storyteller mien that makes all the description seem necessary to convey the proper atmosphere.

There are a few things that keep this from getting an A+, however. There are two characters who receive quirky nicknames, which can come off as just a little pretentious. When Calliope’s brother is called Chapter Eleven in the first chapter, it totally elicited a groan from me, because I generally hate books that do stuff like that. It is eventually explained, but it just seems a little look-at-me clever. Also, there’s a bit of a plot hole at the end.

So, a plain ol’ A it is. Get the unabridged audio if you can.