By Norafukurou and Rei Shichiwa. Released in Japan by Legend Novels (Kodansha). Released in North America by J-Novel Club. Translated by Hikoki.

I have to admit, if you asked me what the next volume of The Economics of Prophecy, a work whose core audience is made up of older men already in the Japanese workforce, would be about, “school festival arc” is not what would have sprung to mind. And yet our heroes are at a school for sons and daughters of guild nobility, and therefore it stands to reason that a festival would be just as cutthroat as anything else. Naturally, it’s once again the strong vs. the slightly less strong, with Ricardo (who presents himself as the weakest but is anything but) trying to walk a fine line so that he can get what he wants in the end. The fine line is the most interesting part of this book, as it becomes clear to the reader that denseness about women might not be Ricardo’s only fault; he doesn’t really seem to realize how deep into the political world he has to get till it’s spelled out for hi8m at the end. 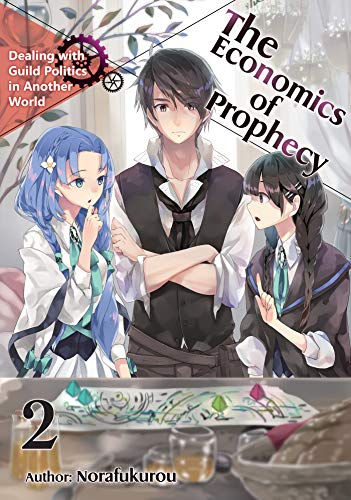 As you might expect, the school festival is an excuse for the kids to show off their future inheritance, with the best rooms taken by the stronger family simply by dint of rewriting the rules. Ricardo and Mei do not have a booth (they are, after all, a mere copper family) but they do need to help Alfina the Prophecy Princess, who has been exiled to a courtyard because she has her own politics to deal with. Also, one of the lesser families’ heirs is Mei’s friend (though you get the sense that Mei is less and less thrilled with this as the weeks go on), and, most importantly, he happens to be in the wrong place at the wrong time and gets drawn in. That said, he has a plan. A plan that involves modernizing this kingdom’s concept of dining to take in the outdoor cafe and the single-plate lunch.

I noted the first volume was a bit dry, and that’s also a fault with the second volume: the start in particular is a massive economics lecture that will make you yearn for the plot to begin. Once it does, however, the book picks up considerably: the interfamily politics and Ricardo’s navigating through it all with ease is immensely fun (he’s just as OP as any other isekai hero, just in terms of economic theory and political savvy). He continues to be unaware that both Alfina and Mei are in love with him, and in fact explicitly notes that Alfina, due to his live lived in Japan added to his years here, is more of a niece to him. He’s also, however, of the impression that he can magically manipulate events behind the scenes to perfection, explain exactly how he did so, and then quietly go back to his honey company and keep plugging away. That is just not going to happen, as the families explain to him at the end. It’s amusing.

There’s setup for a third book towards the end, a book that, as of this review, has not come out in Japan. So it may be a while before we see more of this. Still, if you want less dungeon crawling and magical swords and more explanations of sunk cost fallacies, this is the series for you.

By Norafukurou and Rei Shichiwa. Released in Japan by Legend Novels (Kodansha). Released in North America by J-Novel Club. Translated by Hikoki.

So you want to read an isekai, but instead of being a horny Japanese teenager, you’re a late 30s-early 40s Japanese officer worker. You’re married, have a couple of kids. You really are not looking for a fantasy involving game systems, harem building, and fanservice. You don’t even need illustrations. You’re looking for something a bit more highbrow. Fortunately, Legend Novels, a fairly new Kodansha imprint, has you covered. The Economics of Prophecy is not kidding about its economics, and so will replace discussion of gaming stats with correlation coefficients. There is more than one girl interested in the hero, but they are more understated and political about it. As for the hero, well, yes, he’s a bit bland, but he’s bland in an ADULT way. All that said, this is still a young Japanese man transported to another world with monsters and magic, who goes to an elite private school along with his unlucky childhood friend and the gorgeous, naive princess. Not ALL the tropes are gone. 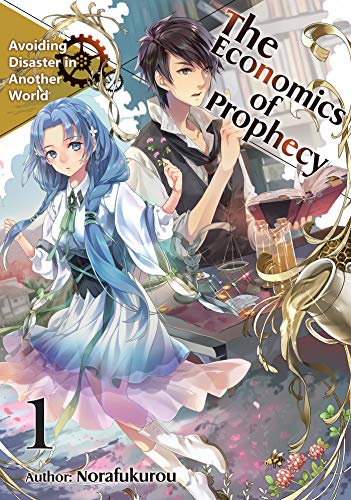 The actual “reincarnated and growing up in a new world” part of Ricardo’s life is glossed over in about two paragraphs – we jump right into him as a young businessman, trying to attend school and get his family honey-making business off the ground. Unfortunately, rival companies are bigger and richer than he is. All he has is his knowledge from Japan of economic theory and his secretary/childhood friend Mia. The fourth princess of the realm, Alfina, even does a taste test between the companies. Unfortunately, as Ricardo finds, once you start meeting this princess you can’t stop meeting her. And she’s actually an oracle with a different prediction than the usual “everything’s fine again this year” – there will be a disaster. What kind? She doesn’t know. Exactly where? She’s not quite sure. Can Ricardo help her figure out what and where is going to happen? And will it even matter given the complacency of this kingdom?

The plot and the main leads are the strongest part of this book. There is a lot of economic stuff, but it never quite gets to the point where you want to flip ahead. Ricardo is one of those “I am scheming and clever but also secretly really nice to people” sorts, a bit like the Genius Prince in Yen’s recent series – he works best when he’s being pressured. Alfina manages to be a very naive, innocent royal without becoming annoying, and she’s really sweet. On the flip side, Mia is vastly underused – we clearly see she has a thing for Ricardo, but given that she (like he) is also emotionally minimal this mostly comes out as disapproval when he’s around other women. I would have liked more of their childhood backstory. Alfina also has an aide that ends up getting relatively humiliated, but I’m not entirely sure that the crime merited the punishment – it wasn’t clear enough that Claudia had abandoned Alfina, so it seemed sort of mean instead.

This is still definitely strong enough that I’d recommend it, and I’ll be reading the second volume. It’s respectable, an isekai you could happily introduce to your parents.