By Sakuma Sasaki and Asagi Tosaka. Released in Japan by Famitsu Bunko. Released in North America by Yen On. Translated by Jordan Taylor.

Sometimes I get a bit ahead of myself. I was really enjoying this second volume of Dirty Way to Destroy the Goddess’ Heroes, and tweeted as such. The second “hero” they had to face off with was very different from Arian, Shinichi’s plans were clever enough, the banter between him and Celes was fun. It was a really fun book, despite the occasional lecherous joke that made me wince. And then came the last quarter or so, where the lecherous jokes that made me wince became the resolution of the entire plot, and the bottom dropped out of the whole thing, leaving it once again something I can only recommend to those who don’t mind the usual light novel perversions, with an added slice of homophobia. It’s really irritating, as the characters are engaging, the plot lends itself well to a 6-book series (as this is), and some of the humor is great. Just… stop with the pedophilia and “gays are predators” jokes. I beg you. 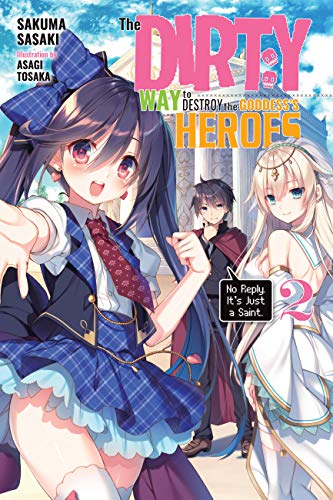 The religious oligarchy trying to take down the demon lord (for their own personal gain, of course) now sends “the Saint” after him. Sanctina has been raised in a box since she was a baby, the daughter of talented magic users who were bribed to have a child and leave it with the Church. There were four others like her, but one by one none of them were quite as “devoted” (read: unwilling to question) as she was, so they vanished or were sent away. Now she’s in a neighboring kingdom taking people’s life force to power a magical container big enough to destroy the demon lord once and for all. Shinichi and company quickly figure out that, because her personality is somewhat blank due to her upbringing, normal means aren’t going to cut it. And so they decide to make Rino, the demon lord’s daughter, into… a pop idol?

As I said, most of this is fun. It mocks idol culture, and Sanctina does make a genuinely disturbing villain. Then we get the climax. First of all, Shinichi hired an incubus to disguise themselves as Sanctina and go around anally raping muggers (and later, after the denouement, Sanctina’s other “Holy Knights”). No. Do not do this. I don’t care how evil the muggers and knights are, and they’re pretty bad, don’t. Do. This. Secondly, Sanctina’s jealousy and hatred of Rino, who is not only a popular idol who can also heal the sick but shows a genuine love and compassion for everyone around her that Sanctina lacks, finally causes her to break. Which is fine. And be sexually attracted to Rino. Who is underage. We’d had a few pedophilia jokes scattered though the book that grated, but this is the climax, and given Sanctina returns with the protagonists, is likely not going away. Shinichi even observes “Great, she’s a lesbian”. Again, just… fuck this.

So yeah, I retract my prior tweet. Dirty Way to Destroy the Goddess’ Heroes has a lot of potential, but in the way can’t quite escape its tendency to wallow in nasty stereotypes for both humor and plot resolution. As such, recommended only to those who are used to that sort of thing and don’t care.

By Sakuma Sasaki and Asagi Tosaka. Released in Japan by Famitsu Bunko. Released in North America by Yen On. Translated by Jordan Taylor.

I didn’t have high hopes for this title going in. Despite assurances from the publisher that it wasn’t THAT kind of dirty, the title still didn’t inspire confidence. It was also the most traditional “isekai” of this month’s debuts. But as frequently happens with things I read, as I got further into the book I found myself warming up to it. This is mostly thanks to the main hero, Arian, who is bright and shiny and yet also lonely and needs a friend. Had the book gone with the original set of heroes we meet, who are rather quickly dispatched, it might have been unbearable, just watching a Japanese guy with nothing to stop him become a sadist because it’s fun. (Indeed, we’re seen other light novels like this, though mercifully few have been licensed.) But Arian’s inner goodness causes Shinichi, the protagonist, to reach down and find his inner ethical sense, and so the last third of the book is actually pretty good, despite the appearance of yet another lecherous and corrupt bishop from a questionable religion. 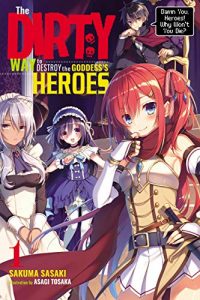 Our hero is Shinichi, a standard young Japanese protagonist whose backstory is merely hinted at, but who seems to relish the opportunity to let loose in the situation he’s now in. He’s been summoned by the demon king to a) eliminate the heroes who keep attacking, and b) find delicious food for his cute daughter, as all the demon world food tastes awful. With the help of a sharp-tongued maid who rains abuse on him at every opportunity, he’s soon able to dispatch the first group of heroes through his prior knowledge of old-school RPGs and also by being a complete and utter bastard. However, the remaining hero that’s left to attack is not only far more talented than the previous heroes, but she’s also cute and a kind, good-hearted person! Can he find it in himself to trick her and save the demons?

There are, of course, still a few big flaws in the book. Despite a last-minute attempt to give him some inner monologue, the bad guy of this volume is (apologies for spoiling, but it’s obvious the moment he appears on the page) your standard corrupt and evil priest, in this case a bishop. Celes, the dark elf maid who accompanies Shinichi on his tasks, is so much like Ram from Re: Zero that I was almost calling the hero Barusu. Possibly as, while he shows signs of depth that may be explored in future books, Shinichi really doesn’t do much to stand out until, as I said, the last third or so of the book, where he uses his sadistic cleverness for good rather than evil. Well, OK, for the good of the demons, but they’re more interested in better food than attacking humans. On the bright side, I liked the relationship between Arian and Shinichi, though I’m sure it will be walked back a bit in the next book. Her immediate infatuation feels in character.

This isn’t the greatest light novel out there, but it gets better as it goes along, and there’s hints of some depth down the road. Recommended for isekai fans.