By Kaori Tsurutani. Released in Japan as “Metamorphose no Engawa” by Kadokawa Shoten, serialization ongoing in the magazine Comic Newtype. Released in North America by Seven Seas. Translated by Jocelyne Allen. Adapted by Ysabet MacFarlane.

In troubled times, sometimes you just want to read something that puts a smile on your face and a song in your heart. Slice-of-life series can be all kinds of things, and this story of an old woman bonding with a teenager over BL manga fits perfectly. Ichinoi teaches calligraphy classes at her home, and is alone now that her husband has passed away. One day, the cafe she goes to closes down so she’s forced to go further into town, where she goes into a bookstore to cool off. Startled by how much of the store is now devoted to manga, she’s taken by a book with gorgeous artwork. She buys it, startling the bookstore clerk, Urara, because the book is BL – something Ichinoi is unaware of till she reads it later at home. That said, the love story within intrigues her, and she goes back to the bookstore for more – sparking a friendship with Urara. 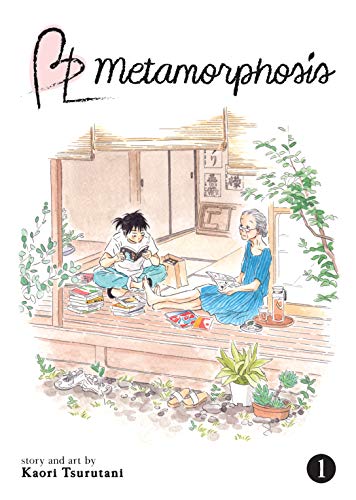 The balance between the new friendship slice-of-life and the BL manga that connects the two is perfectly done. Ichinoi does not have a life that is wanting by any means, but she’s feeling lonely, and enjoys talking about the books with Urara. Urara is the sort of teen I’d describe as ‘naturally sullen”, and has trouble connecting with kids her own age, all of whom seem more together than she is. Discussing the books that Ichinoi is buying helps to break the ice, and Ichinoi is also a natural-born friend-maker, which Urara is very much not. By the end, they’re even going to a writer signing event, though the size of the event proves to be a surprise. It’s a very natural, well-paced budding friendship between two women with 50 years between them.

There is also discussion of the BL manga itself. Ichinoi last read manga back in the Aim for the Ace! days (1970s), so was unprepared for the BL relationship in the book she bought, but she immediately gets into the series. We see occasional pages from the series, showing a not-quite couple, both of whom seem to be bad at communicating their true feelings – one bright and outgoing, one inward and moody. The series is only three volumes long, and it only comes out every 18 months, so for Ichinoi there’s a very real worry she won’t live to see the end of it. The manga ties in with the protagonists’ lives so that it seems natural, and doesn’t overwhelm the day-to-day stuff (such as Urara’s crush on her childhood friend, which isn’t going anywhere as he’s dating someone else.

In the end, this is simply a terrific story, and I really want to see these two hang out and talk about BL manga or anything else they choose to. I’d also like to see more of their pasts – we see Urara had another childhood friend who’s no longer in her orbit, and the final chapter shows Ichinoi approaching a building (for the author signing) her husband wanted to take her to the top of but they never did. Absolutely recommended, whether you like BL or not.