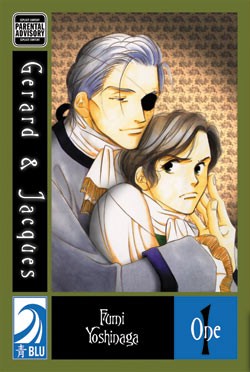 Fumi Yoshinaga’s Gerard & Jacques is a two-volume boys’ love manga that tells the story of Jacques, a young aristocrat swept into a new, terrifying world following the death of his father, and Gerard, the unlikely man who eventually becomes his new family.

Published in English by BLU Manga (Tokyopop’s BL imprint) Gerard & Jacques was recommended highly to me when I first began reading yaoi, but I’ll admit I had some difficulty with it my first time around, due to some specific content in the manga’s opening chapter which kept me from enjoying it at all at the time.

When I began to make plans for this special week of Yoshinaga, I decided to give Gerard & Jacques another try. I was also interested to hear what some of my favorite critics (and BL fans) thought of the work, so I invited a few of them along for the ride.

Joining me in discussion are …