SEAN: Welcome to October. Here’s your giant pile of manga.

SEAN: Cross Infinite World gives us a light novel adapting a visual novel. Root Double -Before Crime * After Days- √After is the first of (I believe) five books that delve into this story, which is apparently a variation on “we are trapped and people are dying”. And yes, that apparently is its real title.

J-Novel Club has a ludicrous amount of new releases. On the manga side, we debut Animeta! 1 in print, and also have the 2nd volume digitally. Also debuting (print and digital, I think) is Marginal Operation, a military thriller that runs in Kodansha’s Afternoon.

ASH: Oh, that does look good!

SEAN: On the novel end, the digital debut is the highly awaited Sexiled: My Sexist Party Leader Kicked Me Out, So I Teamed Up With a Mythical Sorceress!. Despite the “Sexiled” in the title, this is apparently more a feminist (and also yuri) take on light novel fantasies, written after the Japanese medial school scandals showing they were fudging results to admit fewer women. I’ve seen bits quoted and it sounds fantastic.

ASH: I’ll admit, the quoted bits that I’ve seen make me want to give the entire book a read.

MELINDA: I read very few light novels, but I might have to at least *think* about this one.

SEAN: There are also print volumes for How NOT to Summon a Demon Lord (6), If It’s for My Daughter, I’d Even Defeat a Demon Lord (5), In Another World with My Smartphone (6), and The Magic in This Other World Is Too Far Behind! (5). Digitally, we also get a 7th Lazy Dungeon Master.

Kodansha’s one debut is digital this week, another sequel. Cells NOT at Work! runs in Shonen Sirius, and is about immature red blood cells who want to be NEETs.

MICHELLE: There’s at least one more of these spinoffs in the works, too.

SEAN: And the usual pile digitally. Drifting Dragons 4, Goodbye I’m Being Reincarnated 3, My Sweet Girl 7, Smile Down the Runway 2, and The Tales of Genji: Dreams at Dusk 8.

Seven Seas has two debuts. Ghostly Things (Ayashi Kotogatari) is a Mag Garden title about a girl and a bunch of spirits. The Wize Wize Beasts of the Wizarding Wizdoms (Wizdoms no Kemonotachi) also deals with magical creatures, but runs in Akaneshinsha’s Opera, so my guess is it’s more on a BL tip.

MICHELLE: Wize Wize Beasts is by Nagabe, of The Girl from the Other Side fame! I’m really looking forward to it.

ASH: YES! YES IT IS! I’m very excited to get my hands on it.

MELINDA: I’m always into spirits, so I might check out Ghostly Things. But also, yes on Wize Wize Beasts.

SEAN: Vertical debuts the manga version of Bakemonogatari. It runs in Weekly Shonen Magazine, and is drawn by Oh Great!, the author of fanservice laden Tenjo Tenghe. Normally I might carp, but honestly he’s the perfect creator to give us Araragi’s teenage perversions as well as making monologues EXTRA dramatic. 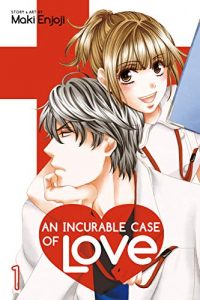 Viz has one debut this week, and it’s a new josei title. An Incurable Case of Love (Koi wa Tsuzuku yo Doko Made mo) is another title from the pen of Maki Enjoji, author of Happy Marriage, and ran in Petit Comic. Expect her usual: male lead that’s standoffish at first, lots of bickering. This one’s a doctor-nurse variant.

ANNA: I am here for this.

MICHELLE: So much good stuff!

ANNA: Nice! I love Yona and I’m always happy for a new volume of Kaze Hikaru.

MICHELLE: I am literally reading every single one of those.

ASH: I’m reading most of them!

MELINDA: Even I am reading some of these!

SEAN: Lastly, Yen has a few September stragglers now coming out in early October. This includes the 13th and final volume of Durarara!!, the 20th A Certain Magical Index and the 8th Goblin Slayer on the light novel side, and Laid-Back Camp 7 and Sacrificial Princess and the King of Beasts 7 on the manga side.

ASH: I enjoyed the opening volumes of Sacrificial Princess and the King of Beasts; I should make a point to catch up.

SEAN: That’s a lot, and it’s a lot of debuts. What are you getting?