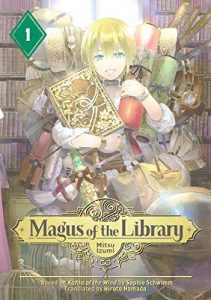 ASH: Even when it’s a relatively quiet week, there are still plenty of manga being released which have caught my attention. The debut that I’m particularly curious about and that I will make my pick this week is Magus of the Library. As a librarian myself, I generally get a kick out of reading about my fictional counterparts. (Granted, sometimes I get immensely frustrated instead…)

MICHELLE: While there are definitely things I like coming out next week, I’m not wildly enthusiastic about any of them, really. I reckon I’ll go with the sixth and final volume of World’s End and Apricot Jam for being a much more wholesome version of a girl involved with the lead singer of a band than I anticipated.

SEAN: My pick is the 4th volume of Tomo-chan Is a Girl!, which has become one of my favorite 4-koma series. It’s funny and has heart.

ANNA: My pick is my stacks of unread manga. Maybe this is the week I will get caught up on something!