SEAN: It’s the new year! 2019 manga! Fortunately, January is always the lightest month of the year, so there’s not TOO much of it. Yet.

SEAN: Apologies to Bookwalker, as I always forget when they release a new volume of The Ryuo’s Work Is Never Done. The 6th novel is already out. 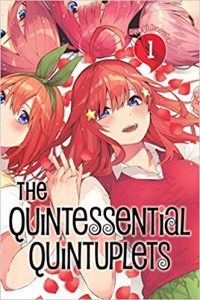 Kodansha debuts in print a title that’s come out digitally already, and is also getting an anime soon. The Quintessential Quintuplets sounds like classic Shonen Magazine romantic comedy.

In print, Kodansha also has a 10th Aho-Girl, the 10th (and final) Descending Stories, and a 4th Tokyo Tarareba Girls.

MICHELLE: I read a little Descending Stories and really liked it. I need to go back and have a marathon now that the final volume is coming out!

SEAN: Digitally, there doesn’t SEEM to be a debut, but I already know they sometimes add those at the last minute. There are definitely new digital volumes for Can You Just Die My Darling? (7), Can I Kiss You Every Day? (3), Chihayafuru (14), and The Prince Romance Gambit 6.

MICHELLE: It seems like the Chihayafuru releases are coming a bit faster now, so huzzah.

ANNA: More for me to get caught up on with Chihayafuru. I’m hoping to make some headway over winter break.

SEAN: Seven Seas doesn’t realize it’s 2019 already, so is releasing these manga while it’s still 2018! Due to the nature of this list it still counts, though. There’s A Certain Scientific Accelerator 8, Devilman Grimoire 5 (a final volume), High-Rise Invasion 5-6, Hungry for You: Endo Yasuko Stalks the Night 2 (also a final volume), and Magika Swordsman and Summoner 10. 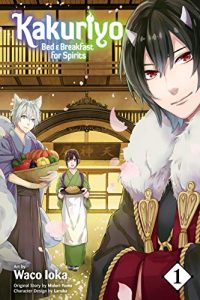 And there is Viz, rounding things out with a heaping helping of shonen and shoujo. The debut is Kakuriyo: Bed & Breakfast for Spirits (Kakuriyo no Yadomeshi: Ayakashi Oyado ni Yomeiri Shimasu), and is an Enterbrain title, from Comic B’s Log. It’s about a young girl who, not wanting to marry a demon to clear her debt, ends up employed at an inn… for the afterlife. Sounds like a good title for Kamisama Kiss fans.

ASH: I’m looking forward to giving this one a try!

MICHELLE: Hm. Could be good!

ASH: Quite a few in this list that I’m reading, too!

ANNA: Me too. Always glad for another volume of Water Dragon’s Bride.

SEAN: So, y’know, there’s a lot. Just not as much as the past few weeks. What interests you?