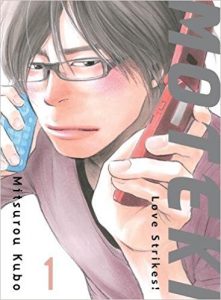 MICHELLE: I’m looking forward to so much this week! Ace of the Diamond, Chihayafuru, Promised Neverland, My Hero Academia, to name but a few. However, seinen romantic comedy from Mitsurou Kubo wins in my book. It’s gotta be Moteki. Plus, you get the first half of the series in one package. Nice!

SEAN: There is, frankly, an embarrassment of riches this week. including every single Shojo Beat title, as well as The Promised Neverland, which will be brilliant and make me suffer. But yes, I’m going with Moteki, a title we would never have seen here if not for Yuri on Ice taking off the way it did. I’m not complaining.

ASH: I’m actively following so many of the series coming out this week! But when it comes to the pick of the week, debuts tend to get most of my attention, and so Moteki it is for me! (Although I’m also rather curious about Kenka Bancho Otome… )

ANNA: There’s a ton of great stuff coming out this week! It makes it so hard to pick! Like many others I have to give Moteki the edge though.