SEAN: Does it say something that having only 25 titles out the week of a Yen Press release dump is rather mild now? I keep thinking “it could be worse!”. I think it’s the new normal.

There are other publishers, of course. Kodansha Comics gives us a 2nd volume of Real Account, a title with good buzz despite being a survival game series.

ASH: I was surprised; it has the potential to become really interesting.

SEAN: There’s also an 8th Tsubasa Reservoir Chronicle omnibus, and I believe this is about the time when I started to actively mock the series.

MELINDA: Poor Tsubasa. So much abuse.

SEAN: Vertical has a new series debuting again, this one called Devils’ Line. It is also a dark fantasy series, just like last week’s To the Abandoned Sacred Beasts, and features vampires. It runs in Kodansha’s Morning Two.

SEAN: OK, that’s it for other publishers. On to Yen Press, starting with its novel line. Another was a under-the-radar horror novel that was released a while back digitally, and did well enough to get a hardcover release later on. Now it’s done well enough to get a sequel licensed, Another Episode S/0.

ASH: I’m looking forward to reading this! The volume includes the manga as well as the novel, too. 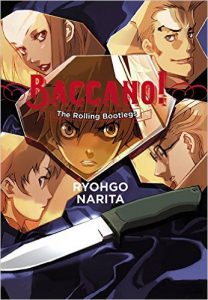 SEAN: Baccano! is easily one of my most awaited novel releases in the history of ever, and it’s finally here. From the creator of Durarara!!, this actually came first, and shows us the story of a group of Mafia (cough) sorry, Camorra gangs in 1930s New York City and their run in with a mysterious elixir. Read this. It’s in hardcover and digital.

The other big novel (also in hardcover and digital) this month is Overlord, whose description sounds like it’s another SAO/Log Horizon knockoff, but I’ve been assured that that’s not actually true, and that this is a fantasy series that goes to a lot of interesting places as it examines what it’s like to be a monstrous creation in an RPG. Looking forward to seeing what the fuss is here.

SEAN: Lastly, there’s a 3rd Strike the Blood, a title that has underperformed for me previously, but maybe the third time is the charm.

Yen Digital seems to be the week after this, so let’s dig right into Yen proper, starting with a third volume of Aldnoah Zero Season One, which is still not Gundam.

Anne Happy: Unhappy Go Lucky! is a new debut that falls somewhere between shonen and seinen, as it runs in Manga Time Kirara Forward, also home of Aldnoah Zero and School-Live!. It’s about a high school class made up of those with natural bad luck, and their struggles to overcome it.

Black Butler has a 22nd volume, and the butler is still buttling onward, while also, yes, being a hot and sexy demon.

Corpse Party: Blood Covered is the first in a series of omnibuses (2 volumes per book) based on a game that came out in 2008. A group of kids find themselves in an alternate dimension that is haunted by the ghosts of some murdered schoolchildren. If you liked Higurashi’s mystery and gore, you should like this.

And a third Dragons Rioting. I need a title I care about stat. 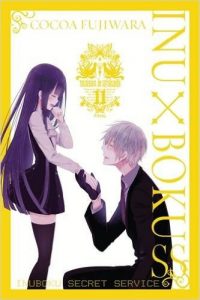 Ah, here we go! Inu x Boku SS wraps up with its 11th volume, and I hear it’s a good ending despite the unfortunate death of its creator right around when it was written. I have enjoyed this series far more than I expected, and am sad to see it go.

Is It Wrong to Try To Pick Up Girls In A Dungeon? has a 5th manga volume, and I suspect will start coming out slower, as we’ve caught up to Japan.

There’s a third Monthly Girls’ Nozaki-kun, hooray! The cover features Kashima and Hori, who may be the series’ most popular fan pairing.

ASH: This series is so great. I love it.

MELINDA: I obviously need to start reading this, looking at my colleagues’ comments.

ANNA: I’m also very much looking forward to this.

SEAN: Its novel may have gotten delayed to September, but the manga is still here, as we get the debut of My Youth Romantic Comedy Is Wrong As I Expected (just call it OreGairu, everyone else does). The story may sound familiar – a pair of misfits end up in the school Service Club trying to help others despite horrible personalities. It does, however, have one very important quality – there are no fantasy elements to it.

Another Madoka spinoff bites the dust, with the final volume of Puella Magi Suzune Magica.

School-Live! gets a third volume of heartwarming friendship and terrifying zombies.

Trinity Seven has hit volume 5, and I believe will be getting that Blake’s Seven crossover any minute now. 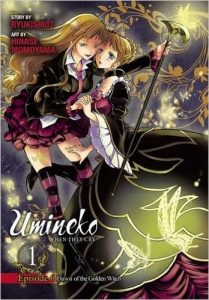 Umineko: When They Cry begins a new arc, despite Beatrice being, y’know, dead. But that hardly stops anyone in this series. Dawn of the Golden Witch is here! We’ll meet more weird “furniture”, and see how murders happen when it’s Battler that’s writing it. Oh yes, and Erika is there too. The artist also did the Higurashi: Massacre Arc manga.

I believe the 12th Until Death Do Us Part omnibus catches us up with Japan, so it’s a perfect time to go read the 2500 or so pages you may have missed.

Lastly, yay! A lucky Volume 13 of Yotsuba&!, the first new volume since 2013! (It was on hiatus in Japan as well.) Are you ready to see Koiwai’s mother? Yotsuba sure is!

ASH: I am so far behind in reading Yotsuba&!, but it is an absolutely delightful manga.

MELINDA: Finally! I feel like Yen has largely moved towards series that are just not going to be my cup of tea, but this is a reminder that it hasn’t always been so!

SEAN: Aside from Baccano!… yes, OK, and Yotsuba&!… what are you getting this week?