SEAN: It’s a busy February, so let’s jump right into next week’s releases. 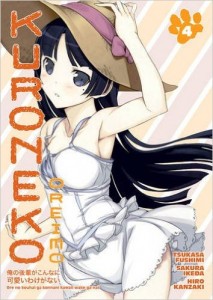 Dark Horse has a 4th volume of Oreimo spinoff Kuroneko.

Kodansha has a 3rd volume of the reluctant reverse harem manga Kiss Him, Not Me!.

ASH: I largely enjoyed the first volume of Kiss Him, Not Me!, but I’ve somehow already managed to fall behind in the series!

SEAN: Seven Seas has a couple of releases. Magika Swordsman and Summoner has reached Vol. 3, which means, given I think the hero is supposed to get a harem of 72 women, it has a ways to go.

And Monster Musume has reached Volume 8, but has not even begun to run out of Monster Girls.

I apologize for leaving out a book last week. Vertical has the first novel of Seraph of the End, whose manga has been coming out via Viz. I think Anna will be interested in this title.

ANNA: I think you are right! Thanks for the heads-up! I am interested in this light novel series, because it features Guren Ichinose, who people have seen in the manga as a more established authority figure. I think the light novel series focuses more on a prequel to the story that’s established in the manga, so it should be really interesting to existing fans of this franchise.

MELINDA: I’m definitely more interested in this than the manga, so count me in for that, too.

SEAN: And Viz has its traditional giant pile. There’s an 8th Assassination Classroom, with more wacky death shenanigans. Not that the teacher has ever been killed. 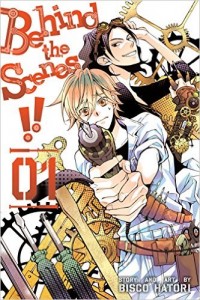 Behind the Scenes!! is the new manga by the creator of Ouran High School Host Club, and it also runs in LaLa. It’s about a shy guy who ends up pulled into a wacky drama club.

MICHELLE: I’m looking forward to this one! Or perhaps I should use two!!

SEAN: Bleach has a 14th 3-in-1, which if I recall correctly has some of the best scenes in the entire series for IchiHime shippers like me.

Food Wars! has hit double digits, but the food battle carries on regardless.

MICHELLE: I will always rejoice over more Food Wars.

ASH: I enjoy it as well.

ANNA: I really have not much to say about this other than JOJO!!!!

SEAN: And Kamisama Kiss is at Volume 20! I really hadn’t expected it to last this long. It’s still great, though.

ANNA: It is a rare series that manages to be so consistently great for so long.

SEAN: Maid-sama! has a 3rd omnibus, and is as problematic yet readable as ever. Hope you like lots of words.

MICHELLE: And yet I like it enough to keep reading.

ANNA: It has moments of charm despite being problematic.

SEAN: And superhero school manga My Hero Academia has a 3rd volume.

Naruto has another of those epilogue light novels, this one called Shikamaru’s Story. My guess is it stars Shikamaru.

One Piece is up to Volume 77, and yes, it’s still in Dressrosa. But who cares, it’s One Piece, it will be awesome. 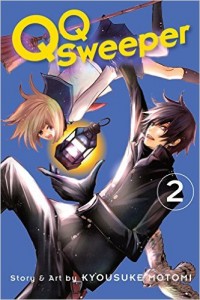 SEAN: QQ Sweeper finally gets a 2nd volume. I had wondered where it was.

MICHELLE: I’m looking forward to more of this!

ANNA: Super excited for this!

SEAN: School Judgement is a new Weekly Shonen Jump series by the artist who did Bakuman and Death Note, this time paired with a new writer. It’s Ace Attorney meets Jump, I hear?

MICHELLE: And to this!

ANNA: I’m going to check this out for sure.

ASH: I somehow completely missed hearing about this until now.

MELINDA: I was so surprised to see this, considering the intensity of my Takeshi Obata fandom. I’m so on this.

SEAN: So Cute It Hurts!!!!! now gets 5 punctuation marks for its 5th volume.

MICHELLE: But not so much this.

ANNA: I like it, but it is a middle of the road title. Fun disposable reading though.

SEAN: Toriko has no punctuation parks after its title, and thank God, as it’s Vol. 32.

What are you going to get from this list?