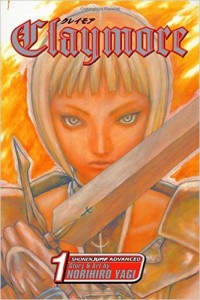 SEAN: I was going to go with L♥DK for this week’s pick, but then sadly I read it. So instead, with a minimal number of things I’m excited about, I will pick Udon’s first volume of Kill La Kill. The anime got huge buzz, both good and bad, on the Twitters and the Tumblrs, and I look forward to seeing what the excitement is all about.

MICHELLE: Oh, no! But I guess, in the absence of anything else I was planning to get, that I will still pick L♥DK anyway. With much trepidation.

ASH: I seem to be hearing a lot of good things about Claymore recently, but I’ve never actually read any of the manga. So, I’m definitely eyeing the giant box set that’s being released this week.

MELINDA: This feels like the right time to give another boost to Claymore, one of my very favorite shounen series. It’s dark, it’s thrilling, it’s filled with incredible female characters… what’s not to like? I don’t have any need for Viz’s new box set myself, but I’d encourage anyone to consider it! It’s a fantastic series.