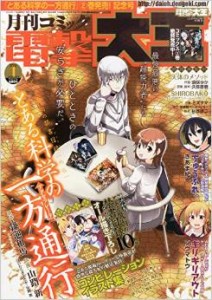 Way back when I started reading manga, the very first magazine I ever subscribed to was Dengeki Daioh. It had two, maybe three series running at any given time that I was following, a bunch more I could take or leave and a few that made me want to shower in acid. And so it remains, all these years later, long after I have stopped subscribing. ^_^

Like many magazines of its kind, Dengeki Daioh rides a line between targeting teens and adult men. Stories frequently star young women in various states of undress rather more often than not, who will sometimes throw themselves at the male protagonists, and kisses that are common, but not commonly mutual. The magazine also has a fairly evident lolicon readership, as indicated by many of their most popular series – some of which have made over to western shores, Masayuki Takano’s Blood Alone, Barasui’s Ichigo Mashimaro (Strawberry Marshmallow) and Kiyohito Azuma’s Yotsubato! (Yotsuba&!).

In fact, many of the series that run in the pages of Dengeki Daioh are popular, often as a result of a unique marketing tactic – manga series running in Daioh are very likely to get at least one season of an anime. The anime will end, but the manga series continues, now with a larger readership. It’s pretty rare for a Daioh series to get more than one season, in fact, which makes the exceptions that much more notable. Between  Mediaworks open licensing and Kadokawa’s relentless marketing of  popular series, it is not atypical to page through an issue of Daioh and have heard of more than a third of the series currently running. The addition of Kadokawa as a publisher means that readers are also seeing more manga adaptations of Light Novels in the magazine’s pages.

Originally started by Mediaworks in 1994, now published by ASCII Mediaworks and Kadokawa Publishing in partnership as a monthly, Daioh is the lead title in the Dengeki imprint, with a monthly circulation of 130,000, (the imprint also includes Dengeki’s G’s, Moeoh and Teioh magazines). The website is fully featured with sample chapters, highlights of the most popular series, news of upcoming anime, recruitment campaigns, contests, editor’s blog and upcoming manga releases.  At 800 yen ($6.58 at time of writing) for over 1000 pages, Dengeki Daioh is a pretty cheap way  to buy a lot of cheap entertainment.