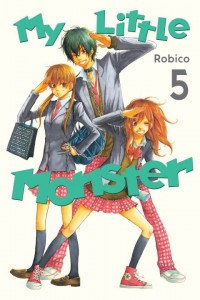 SEAN: Kodansha has the 5th volume of shoujo romance My Little Monster, which is still dealing with social ineptness in the best way.

MELINDA: I feel like I’m really missing out by not reading this. I probably have to fix that.

MICHELLE: I do honestly think that you would like it.

ANNA: Now I feel like I should be reading this! But I have far far too much manga to get caught up on.

SEAN: And the 2nd volume of Noragami, which I’m hoping kicks things into gear now that we have a 3rd cast member.

ASH: By the end, I rather enjoyed the first volume. Looking forward to seeing how the series develops.

SEAN: Seven Seas has another Devils and Realist, which I’m hoping keeps the denial in addition to all its handsome devils.

ASH: This series has actually really started to grow on me.

ANNA: I liked the first volume well enough but haven’t picked up the others for whatever reason.

SEAN: Dragonar Academy 4 has dragons and fanservice, possibly not in that order.

Kokoro Connect was surprisingly serious about its body swapping, even if at times the exposition felt a bit stilted. I look forward to seeing where the second volume goes.

Monster Musume 5 has monsters and fanservice, possibly not in that order.

ASH: Since both things are fairly constant, I’m not sure there can be much of an order… 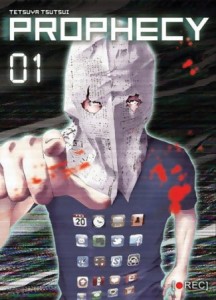 SEAN: Prophecy is our first new title, a seinen title involving a masked man who predicts crimes… which then happen. This looks pretty grim, but is supposed to be a real page-turner.

MICHELLE: Me, too! Something just got added to my shopping list!

ASH: I’ll be checking it out!

ANNA: I’m intrigued but am reserving judgement until you guys check it out.

SEAN: Viz, as always in the 3rd week of the month, has its ‘Signature’ series titles. We have another volume of Gangsta, which I’m starting to like even more than Black Lagoon, its spiritual predecessor.

SEAN: Ooku hasn’t come out in ages, so a 10th volume is very welcome.

MICHELLE: What she said.

ASH: And another yay for good measure!

ANNA: Yet another yay for Ooku!

SEAN: And I know the Manga Bookshelf crew will be ecstatic with a 13th volume of Real.

MICHELLE: I am performing the Baby Groot dance as we speak.

ASH: Real is a phenomenal series. If you’re not already reading it, give it a try!

ANNA: It is really great.

SEAN: I’ve never played the games, but one can’t deny the overwhelming popularity of the Resident Evil franchise, and here we have the first volume of a manga adaptation called The Marwha Desire, which ran in Akita Shoten’s Weekly Shonen Champion.

Terra Formars 3 is also coming out.

Yen On has a 2nd volume of the light novel Accel World, whose first volume I enjoyed, and whose protagonist is intriguing, so I will see where it goes from here.

MELINDA: I’m on board for this, definitely! 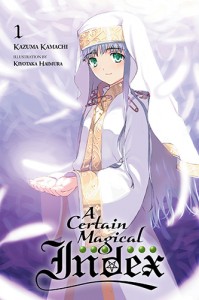 SEAN: The big light novel out next week, though, is even more well-known in the anime and manga fandom. A Certain Magical Index has become a giant franchise, whose anime is already out over here, and whose manga spinoff, A Certain Scientific Railgun, has sold quite well indeed. Now see where it all began, with this first volume.

Ani-Imo is a shoujo title from Aria, a magazine known for odd shoujo titles. Do you like bodyswapping? Do you like suggestions of incest? Then you’ll love this title, whose creator has been doing ‘saucy’ shoujo for years.

MELINDA: I was right there… until “incest.” Just. No.

MICHELLE: That’s an odd shoujo title for sure. Even the cover art looks like it’s meant for some other demographic.

SEAN: Anything I could have said about BTOOOM! I got out with the previous 7 volumes, so… 8.

Durarara!! continues adapting the third novel with the 2nd volume of the Yellow Scarves arc. (That can be confusing. Welcome to light novel adaptations, here’s your accordion.)

Another debut with Gou-dere Sora Nagihara, which ran in Hakusensha’s Young Animal Arashi. It’s pretty ecchi, and involves an otaku’s 2D fantasy girl coming to life and not being quite the shy, demure girl he was expecting.

Speaking of ecchi, another volume of High School DxD is here.

Higurashi: When They Cry ended last year, and Rika finally got her happy ending, provided she doesn’t do anything foolish like bike in front of a truck. (cough) Please enjoy Higurashi’s “epilogue”, the Dice-Killing Arc.

The Melancholy of Haruhi Suzumiya also has its 20th and final volume, though the spinoffs are still running. Forever doomed to be in the shadow of the novels and anime, it’s probably for the best it ends here as it runs out of novel to adapt. 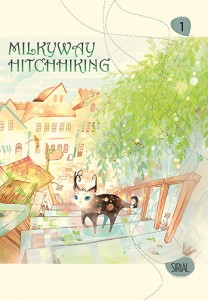 Milkyway Hitchhiking is a new manwha from the creator of One Fine Day, and is also in full color. It seems to be episodic tales connected by a time-space cat.

MELINDA: Wahoo! I loved One Fine Day, so I am very enthusiastic about this.

MICHELLE: Oh! I forgot this was coming out. It looks like very much my sort of thing.

ANNA: This does sound quite appealing.

MELINDA: You know me so well. I will be eating this up with a spoon.

MELINDA: It’s beautiful! Truly. Really, truly. And I offer proof (thanks to Sean).

SEAN: Soul Eater’s covers are still nearly black, which tells me things are still not looking good for our heroes as we head towards the story’s climax.

And there’s also the 4th volume of Soul Eater NOT!, which I believe is also a final volume. Who will Tsugumi choose as her girlfr… um, partner?

MELINDA: Heh, I haven’t enjoyed the manga as much as the novels (or the anime), but I’ll take it.

SEAN: Lastly, Triage X marches on, with its 8th volume out next week.

That’s not too much. Surely you can buy all of that in one week, right?