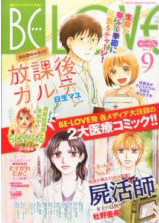 We’ve talked a lot here on Magazine no Mori about what manga salarymen in Japan read. Today, we’re going look at a magazine with an adult female homemaker readership, Be Love magazine, from Kodansha. It’s a truism that Josei manga rarely does well as anime.

Stories in most magazines for adult women follow career, family, romance, all of which make pretty “meh” anime, but are often very successful as live-action TV dramas.Be Love magazine includes a very notable exception to the rule – Tsuetsugu Yuki’s extremely popular game manga series, Chihayafuru (which was ran as an anime TV series, original DVD animation and a Light Novel series.) It’s not terribly surprising, then, that on the tail of Chihayafuru‘s success, Be Love has another Karte-related series, as well, “Houkago Karte.” Also following up a popular series, the creator of Chi’s Sweet Home, Konami Kanata, has another domestic cat series, “Fukufuku Nyaan” that runs in Be Love.

First published in 1980, Be Love now has a monthly circulation of 120,405 according to the Japanese Magazine Publisher’s Association. It sells for 460 yen ($4.49 at time of writing) an issue, for approximately 420 pages. An indication of the audience for this magazine being homemakers are the contest prizes and giveaways from the magazine, which include items like microwaves, vacuum cleaners and matching pot sets, making this magazine the manga equivalent of afternoon soap operas.

Be Love does have a website, with a focus on purchasing released volumes of manga (with a rather lovely search for titles “like this” and “in the same genre,” as well as sample chapters from various manga series, series news, character intros, messages from the creators, and downloads like computer wallpapers.

As a whole, it is very hard to put a single label on the magazine.It has manga about adults and about children and adults with children; the stories tend to be realistic with an edge of fantasy, rather than purely fantastic. The magazine has decidedly less focus on romance than other Josei magazines, but makes up for it with other complex emotional situations. Be Love, from Kodansha: http://kc.kodansha.co.jp/magazine/index.php/02766