SEAN: The 4th week of April brings us a variety of stuff, even if the majority comes from Yen Press, who always enjoy getting a week mostly to themselves (Viz usually owns Week 1 for this purpose). 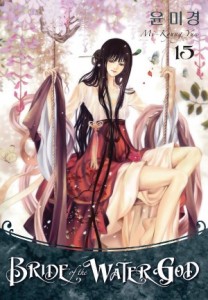 There’s not nearly as much Korean manwha coming out these days, so I can actually highlight it when it does appear. This week sees the 15th volume of Bride of the Water God, which I believe the Manga Bookshelf team has greatly enjoyed in the past.

MELINDA: I am so happy that this series continues to be published! It’s beautiful.

ANNA: I’m fairly indifferent to this series. I thought the first two volumes were lovely, but the plot was so thin that the book didn’t maintain my interest at all. But good on Bride of the Water God for being one of the few surviving translated manwha series!

SEAN: There’s also the 31st volume of Gantz, which I believe the Manga Bookshelf team has not particularly enjoyed in the past, but whose collected costumes in all 31 volumes could power the rubber and lycra industries for the next twenty years.

ASH: I enjoyed the first five volumes or so, but never quite got around to reading more of the series. The length makes the prospect a little daunting at this point…

SEAN: Kodansha gives us the 9th volume of Animal Land, which, like Zatch Bell (by the same creator) I keep hearing good things about but can never quite get into.

ASH: It took me a few volumes to really get into Animal Land, but I’m looking forward to seeing where it goes.

SEAN: Vertical has the 9th volume of Flowers of Evil, which is ending next month in Japan, I believe, so we should be getting near a climax.

ASH: I’ve been waiting for this entire arc to be released before reading it. And now the wait is over!

SEAN: One of the most contested manga of the last few years comes to an end with Vol. 10 of Bunny Drop. I understand this volume mostly features chapters devoted to Rin as a child, but will also have a flashforward past the end of the series, so be warned in advance. I look forward to an post-series interview from Yen Press regarding this title! 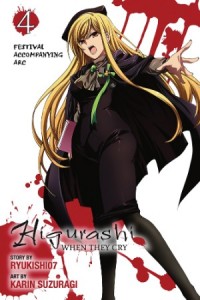 MICHELLE: I’ll be reading it, for the sake of completeness if nothing else.

MELINDA: I’m rather looking forward to it.

ANNA: I dropped it after the third volume because I just found the plot squicky.

ASH: I’m interested in reading this volume. Some of Bunny Drop was incredibly well done. Other parts of it…not so much.

SEAN: Unless Yen decides to surprise me at Sakuracon by announcing the Dice-Killing optional epilogue, this is likely the final volume of Higurashi: When They Cry, containing the final two volumes from the Festival Accompanying Arc. This is, at last, the good end. Not a series I ever thought I’d read, I have since become totally obsessed with it, and thank Yen for exposing me to its charms. Nipaa~!

I’ve also been pleasantly surprised by Inu x Boku SS, which manages to be less moe than I feared and with dark undertones that are handled rather subtly. I am eagerly awaiting this new volume.

As for the 3rd volume of WataMote… all right, fine, No Matter How You Look At It, It’s You Guys’ Fault I’m Not Popular!, the key is to try to balance the excellent art, humor and characterization with the fact that reading about the lead too much makes you lose faith in humanity and possibly the will to live.

MICHELLE: Ugh, no thanks. Life’s too short.

SEAN: Spice & Wolf’s novels have reached double digits, something which is entirely down to the economics examined through the series, and not at all for the moe and occasionally naked wolf-eared girls who also occupy the series. The novels recently ended with Vol. 17, so we’re over the halfway point.

ASH: I finally gave up on the novels a few volume back, but I’m glad that devoted fans are getting more of the series. 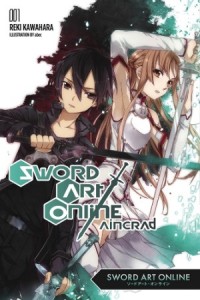 SEAN: I appear to be one of the few people out there who loved the first Sword Art Online manga omnibus, as those who had seen the anime and read the novels said it was very rushed. Luckily, here is the first novel so that I can compare them. I look forward to enjoying them even more. Wish Yen had the digital rights, though.

MELINDA: This is probably my most-anticipated release this week. I loved the anime adaptation of these novels, and I’m very excited to have the chance to read the source material!

SEAN: Lastly, we have the 2nd and final omnibus of the 3rd Umineko arc, Banquet of the Golden Witch. This should be the last of the truly doorstopping omnibuses – the series went from 5 volumes per arc to 6 after this, so further omnibuses will be 2-2-2 rather than 2.5/2.5. As for the content, after this ends you should have a lot more clues as to Beatrice’s true nature.

MICHELLE: Is that one kid still going “Uuu! Uuuuuu!!” all the time?

SEAN: She’s dead at this point in the arc (Umineko and Higurashi are the only two series where I can say that and have it not be a spoiler). The 4th arc will explore her life in depth, and explain the background of the “uu-uuu’ thing. It’s far more tragic and depressing than just an annoying tic. (Though admittedly, we aren’t there yet, and I admit it is a very annoying tic.)