“This is jealousy. This is… anger.” 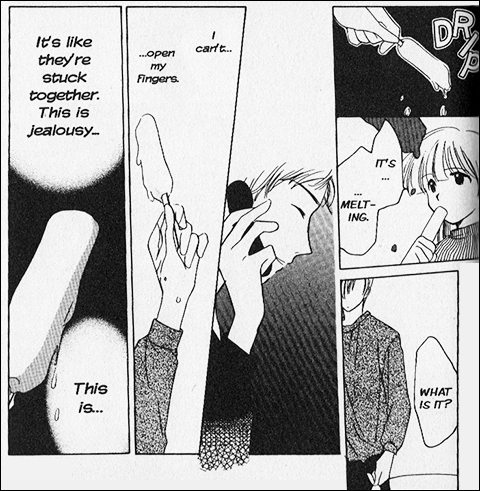 From the pages of josei magazine Comic Crimson, Yun Kouga’s Crown of Love is a fairly unusual tale of teen romance—unusual in that, despite its characters’ ages, it begins as a tale of romantic obsession that resists romanticization. Published under Viz’s Shojo Beat imprint here in North America, Crown of Love‘s premise resembles any number of shoujo titles in which a teen heroine (or, in this case, hero) breaks into show business in order to pursue the love of a celebrity.

Where Crown of Love differs is in its execution, specifically in the fact that it portrays its hero’s obsession as genuinely problematic, rather than romantic or cute. It is also completely up-front about the painful and unsatisfactory nature of unrequited love (and unbalanced relationships of all kinds). And though it is technically a love story, it could also be described as a story primarily about jealousy. And wow does Yun Kouga get jealousy.

You’ve been there, right? That sudden, awful realization that sends your heart pounding and your head spinning until you can’t even see straight? Or maybe the slow, ugly burn that sits in the pit of your stomach making you sicker, day by day? Oh, jealousy… jealousy. I’m not sure there’s anything that feels worse.

A friend once told me, “Jealousy is a warning.” She was right, of course, but it’s not always clear what exactly the warning means. Is your mind finally comprehending the clear, stark reality of your partner’s infidelity? Is it letting you know that you need to watch your back? Or is it simply trying to tell you that you’re way too deep into something that can only bring you pain? 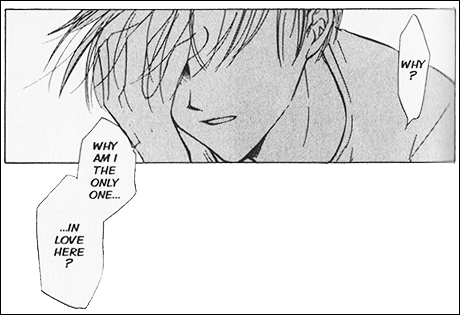 Hisayoshi Tajima is an aloof, good-looking violin student at an elite performing arts high school, whose chance encounter with popular teen idol Rima Fujio has sent him head over heels. Determined to somehow meet her again, he allows Rima’s former manager, Ikeshiba, to scout him as an idol, despite the (literally) violent objections of his opera singer father.

Signing with Ikeshiba does indeed place Hisayoshi close to Rima, but it doesn’t remotely help his cause, as she sees him only as a rival for the attentions of both the public and Ikeshiba, for whom she’s long harbored romantic feelings.

Wracked with jealousy, Rima fails utterly to hide her animosity towards Hisayoshi, which only serves to make her feel wretched and more threatened—a vicious cycle. This leaves Hisayoshi, in turn, feeling painfully jealous of Ikeshiba (for whom Rima’s crush is largely a nuisance).

Hisayoshi’s jealousy is raw, ugly, and occasionally creepy, as he struggles to handle real rejection for the first time in his life. He’s completely overwhelmed by the strength of his feelings and his inability to maintain his natural poise. Hisayoshi’s desperation is palpable, and he is horrified to recognize in himself the same miserable clinging he’s always despised in his mother’s relationship with his father. Love, let alone unrequited love, is a new experience for him, and it’s enough to turn him into, well… a stalker (despite his insistence otherwise). But it’s jealousy that really does a number on him, as he compares himself to smug, confident Ikeshiba whom Rima so admires. 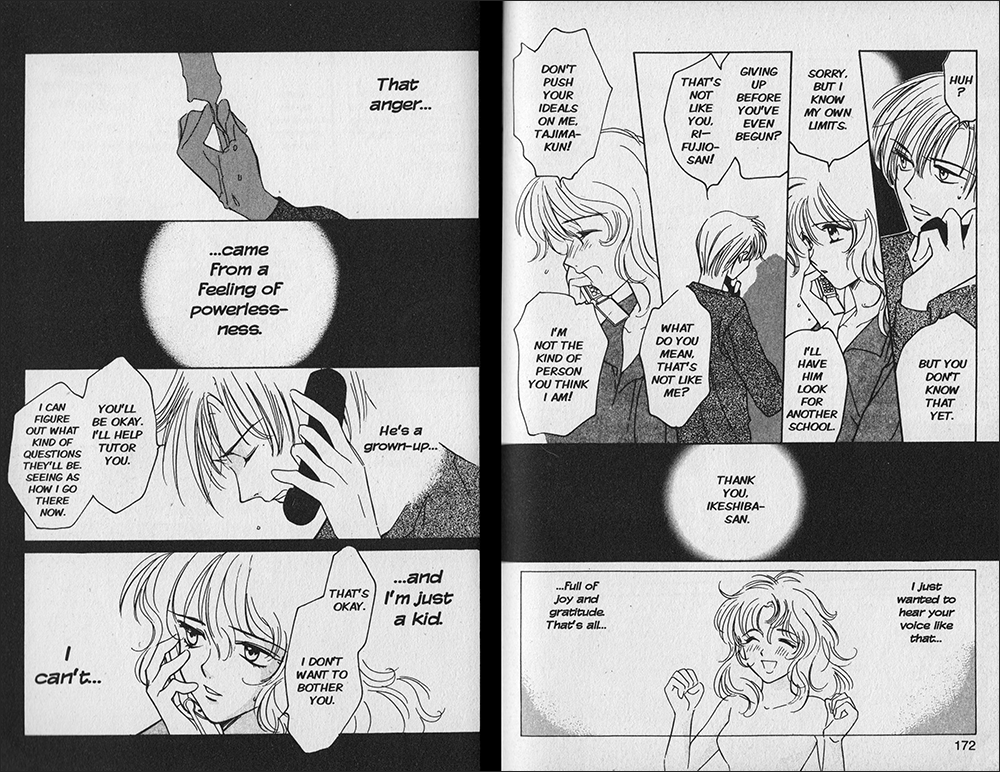 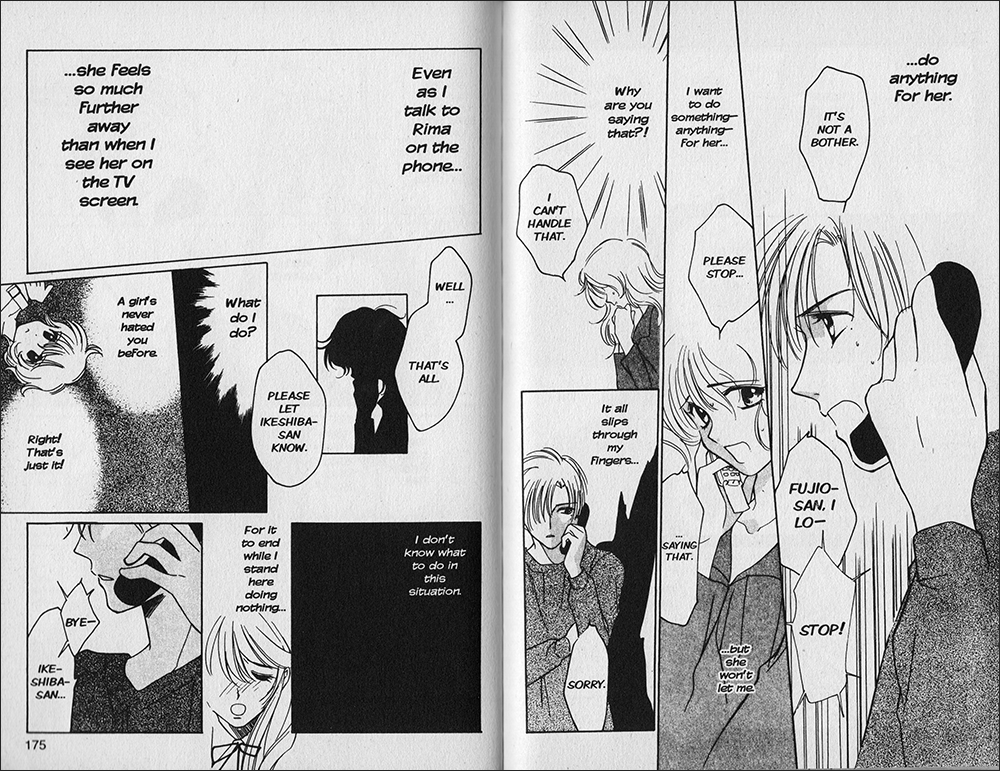 Hisayoshi’s star is rising, but he’s no plucky shoujo heroine, cheerfully striving to do his best. Instead, he’s fighting his hormones, his entitled upbringing, and his pride in a an ongoing attempt just to not make a complete ass of himself in front of his manager and the girl he’s fallen for so hard.

Needless to say, he mostly fails. 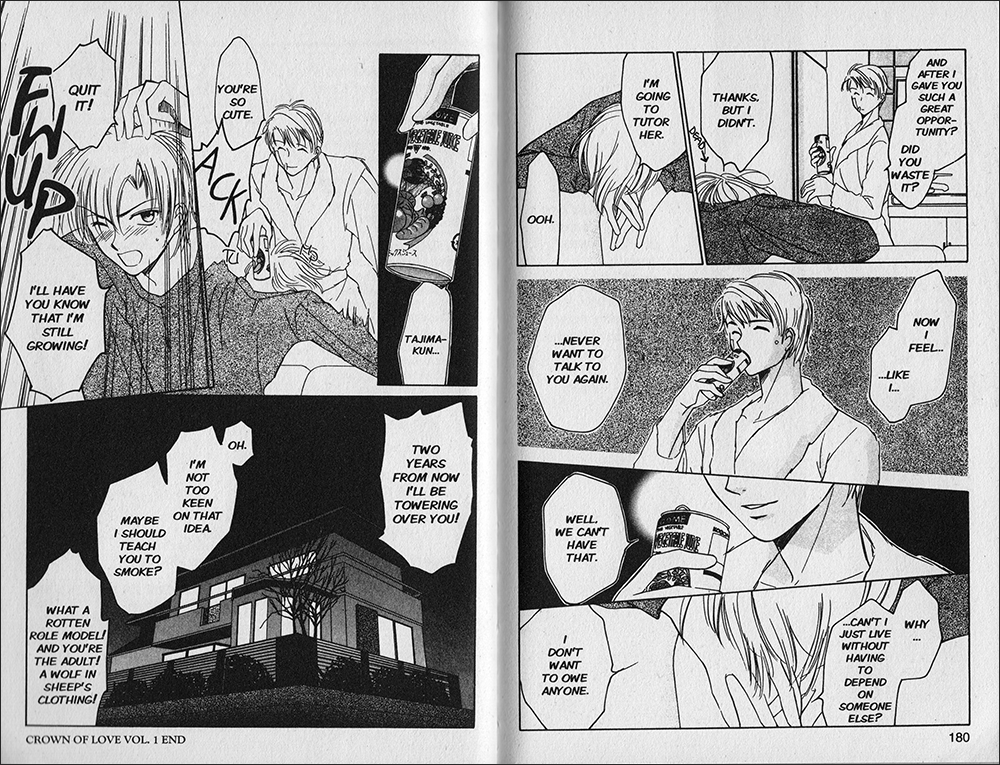 Despite what Ikeshiba says here, there’s nothing cute about Hisayoshi’s behavior at all, and he knows it. And this only serves to feed his desperation and the lengths to which he is willing to go to try to justify his feelings and actions. Though, to his credit, he’s relatively self-aware, even when he’s at his worst. “It’s so obvious I have ulterior motives,” he thinks to himself as he’s tutoring Rima in her schoolwork. “How low can I get?”

While Hisayoshi’s jealousy is raw and openly childish, Rima’s is more controlled, at least in most environments. Having lived in the public eye for years, she’s learned the importance of keeping her composure in front of… well, pretty much anyone. She’s also anxious to act the adult for Ikeshiba, who, in her opinion, has never taken her feelings seriously. Still, Hisayoshi’s appearance on the scene is an obvious punch in the gut. 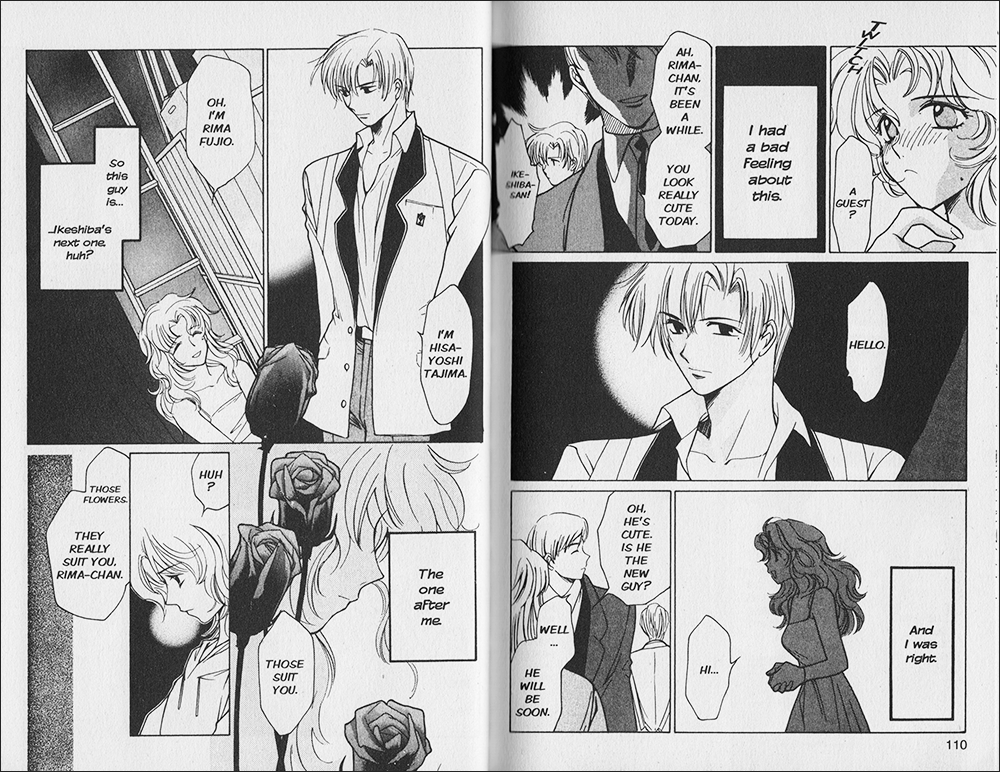 Later, when she’s faced with the full power of Hisayoshi’s idol appeal, she’s able to turn her insecurity into competitiveness, which at least allows her to maintain at least a little dignity in front of Ikeshiba. But Kouga-sensei deftly uses Rima’s body language and her expressive way with eyes to let us see Rima’s true vulnerability. 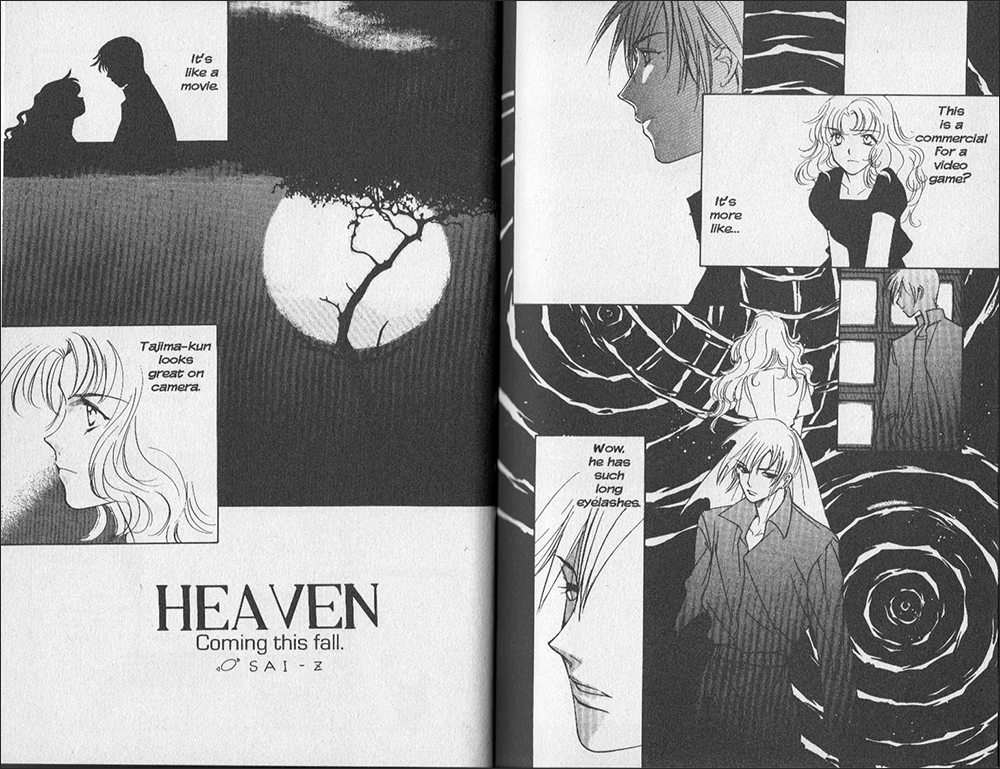 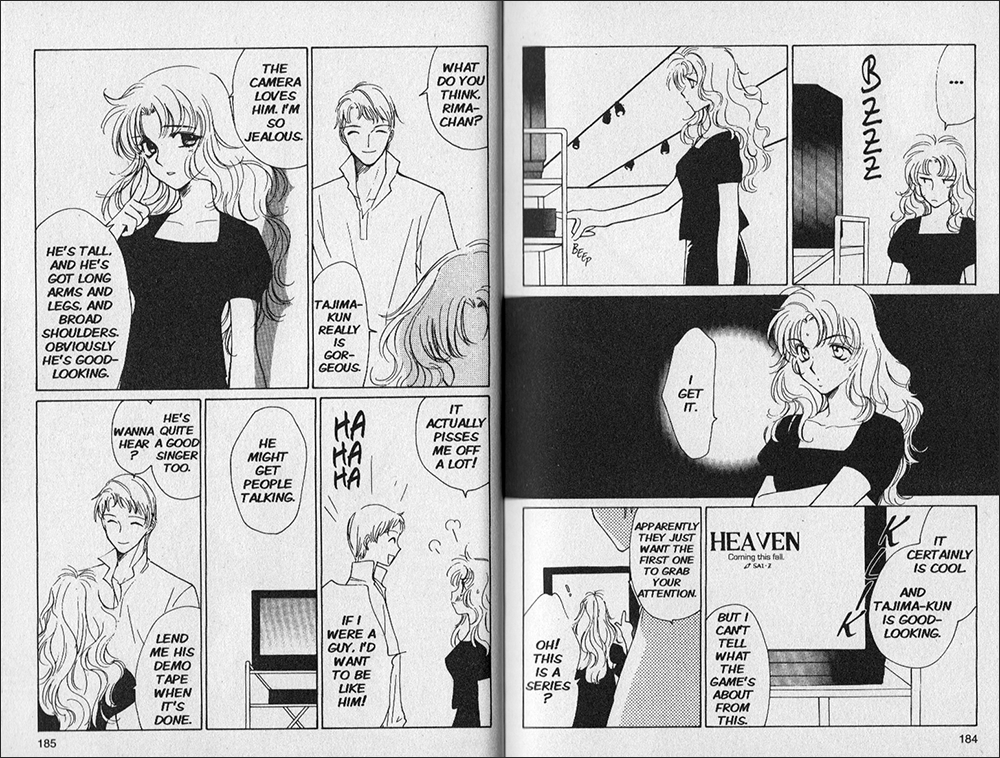 Perhaps the most intriguing character in the middle of it all, however, is the source of everyone’s jealousy, Ikeshiba. Married, with two young daughters and a hospitalized wife, Ikeshiba is smooth, guarded, and definitely a player, in every sense of the word. He’s never willing to exactly say no to Rima, even as he keeps her at arm’s length, and he’s certainly not ashamed to manipulate Hisayoshi in order to make money off of him. 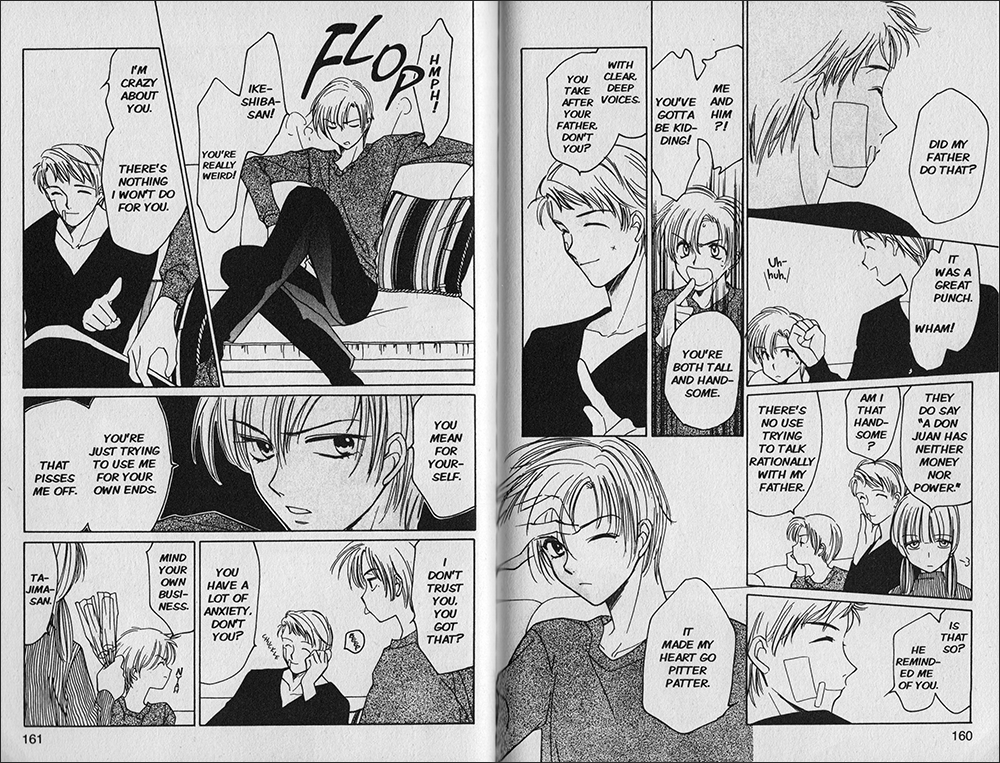 Early in the series, Ikeshiba’s machinations tend to come off as, frankly, adorable, and usually played for sly laughs. But one of the most chilling scenes in the series occurs at the end of volume three, when Ikeshiba finally gives Rima a taste of what she’s been asking him for all these years.

Later, certain that something has happened between Rima and Ikeshiba (something has), Hisayoshi barges into Ikeshiba’s house to confront him in a fit of jealousy. Kouga captures Hisayoshi’s condition perfectly—the adrenaline-fueled fear/rage of jealousy that heats him to a fevered state. But it’s Ikeshiba who gives us the chills, as he cooly lies to Hisayoshi’s face.

“It’s a harsh world,” he thinks as he swears nothing has happened. “If you think I can’t lie to you when you look me right in the eyes… then you really are just a kid. If you think adults are always nice to children, you’re making a big mistake.” 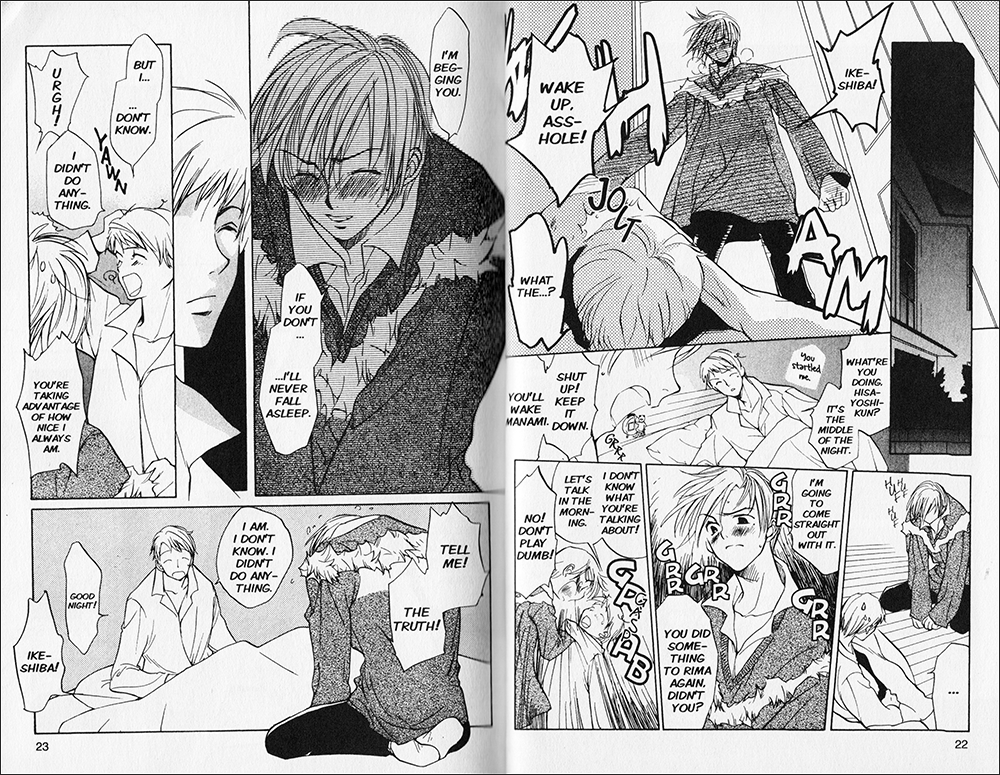 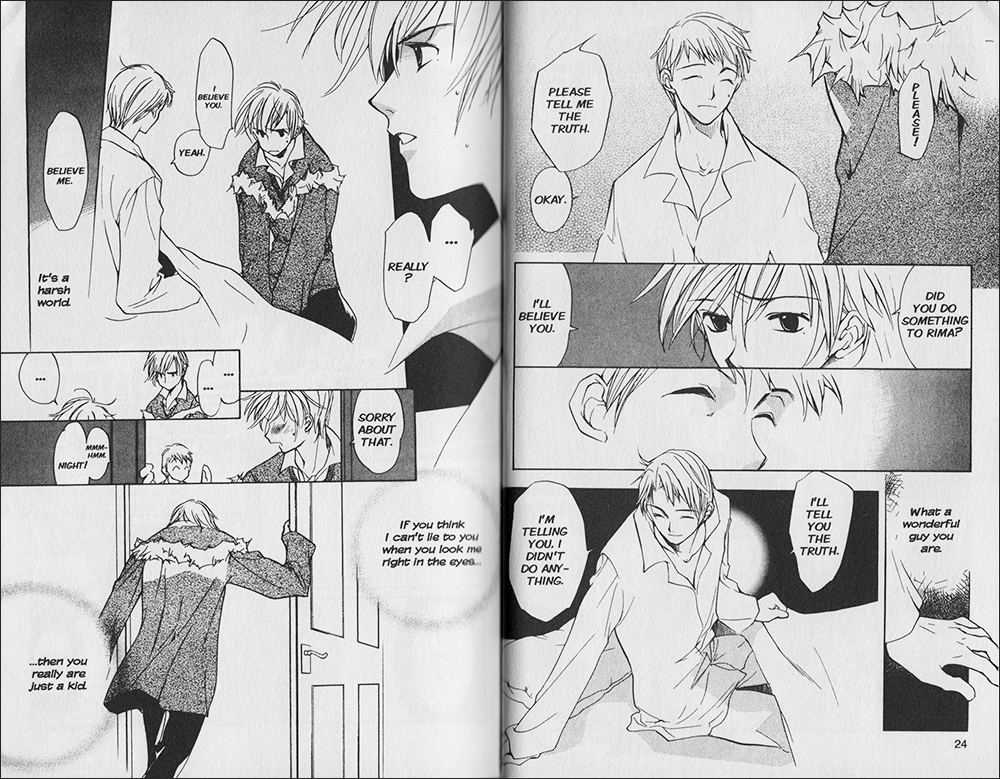 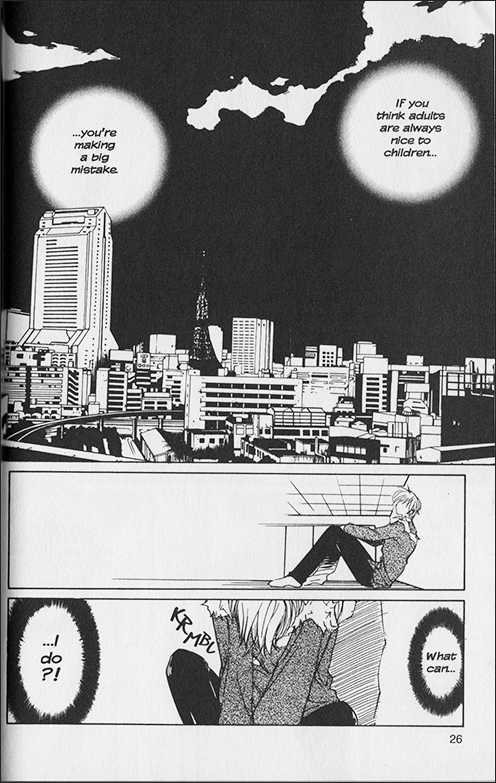 It’s scenes like this that make Crown of Love really work, and also what makes it stand apart from most “shoujo” offerings here in North America. It’s also a prime example of Kouga-sensei’s skill with this kind of characterization. I love a good shoujo romance as much as the next middle-aged lady, but it’s this kind of writing—this ability to get me invested in flawed, petty, maddeningly relatable characters—that keeps me coming back to Yun Kouga, time and again.