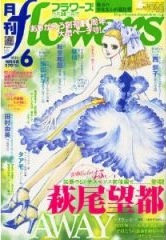 In the current volume of Flowers, the award-winning, essential manga Heart of Thomas creator, Moto Hagio, contributes a brand new Sci-fi series Away. Saito Chiho, best known here for the manga version of Revolutionary Girl Utena, is working on a manga retelling of the classic Japanese tale of gender-switching, Torikaebaya. Tamura Yumi’s 7 Seeds was begun on the pages of Betsucomi in 2001, but continues in the pages of Flowers, since 2002. Also notable for western fans, Higa Aloha’s Shirokuma Cafe, which was given an anime adaption and streamed as Polar Bear Cafe, runs in this magazine.

Ancient Japan, the modern world and futurescapes live side by side in Flowers. Stories of alternate histories, such as Akaishi Michiyo’s Amakusa 1637 – which completely rewrote Japanese history – and Moto Hagio’s science fiction Barbara Ikai, will sit comfortably next to Yuu Watase’s  Fushigi Yugi Genbu Kaiden. Japan’s past, present  and future, talking animals, alternate states of being…this Josei magazine, while showcasing grace and beauty, is not at all afraid to ask, “What if it all goes wrong?” The predominant art style is one I’d like to call “Timeless” without irony. These artists have been working for decades and, in some cases, have been genre-defining. One can see the influences of decades of manga and centuries of visual references from Fine Art in the pages of Flowers.

Flowers magazine comes in at just over 500 pages for 570 yen ($6.04 at time of writing). The magazine has a website,  which contains interviews with, messages from and profiles of the creators, chapters of new stories for preview, and publishing schedules. (If you want to be sobered by the sheer mass of work by some of the women who publish in Flowers, click on a few bios and looks at the lists of books in print. Akaishi-sensei has something like 50+ books *in print* right now.) Flowers has a 2011 – 2012 monthly circulation of 33,000.

Looking at the cover above, it would be easy to dismiss Flowers as a repository of girlish fantasy but, if one did so, one would miss the crucible of talent that makes the Flowers stable some of the longest-running, most-popular and most-talented group of creators in manga today.