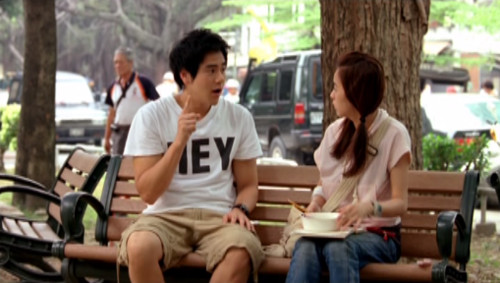 Tiankuo, who works for his parents’ eatery, delivers some lunch boxes to a training session for a deaf swimming team. There, he meets a pretty young woman called Yangyang. Yangyang is there for her sister, Xiaopeng, who hopes to participate in the Deaflympics (note: the Deaflympics 2009 happened in Taipei, the same year the film came out). Tiankuo happens to be proficient in Taiwanese Sign Language (henceforth referred to as TSL for brevity), so he can chat with Yangyang … but will their relationship go in the direction that Tiankuo hopes for?

This was the most popular Taiwanese film of 2009. That same year, the Deaflympics happened in Taipei. 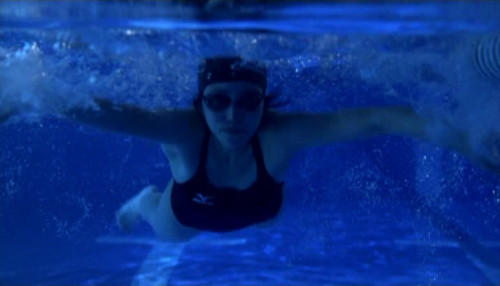 I have encountered a lot more users of sign language in Taiwan than I did in the United States. I can think of three explanations for this:

I don’t know which of the above explanations is correct.

Why Didn’t They Cast a Deaf Actress?

I really think they should have cast a deaf actress in this film. Okay, maybe, just maybe, there aren’t any pretty young deaf women in Taiwan with good acting skills … but I would have preferred casting a deaf actress from Korea or Japan over casting a hearing Taiwanese actress to play a deaf Taiwanese woman (actually, Xiaopeng doesn’t even have to be played by a pretty actress, but I’ll give the producers a pass on that one). And don’t tell me there isn’t a single competent pretty young deaf actress in Taiwan/South Korea/Japan combined – the population is too big for there not to be one. 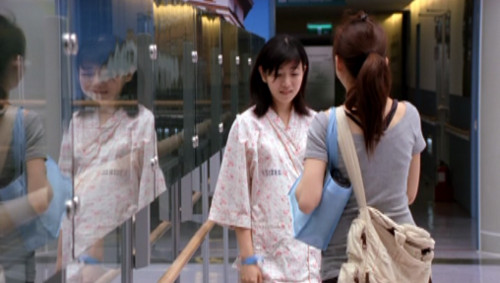 Now, I myself know almost nothing about TSL, so I can’t tell whether the actors worked so hard that in the film they pass for natives in TSL, whether they actually are natives in TSL, or whether people fluent in TSL find the actors’ TSL laughably bad. If the actors did not master TSL well enough to pass for native (well, I suppose Eddie Peng doesn’t need to pass as native since his character, Tiankuo, isn’t native in TSL), then that’s simply disrespectful to deaf people. But even if they do pass for native in the film, I think that casting a hearing actress to play Xiaopeng was wrong.

I bet that there there are deaf women in East Asia who love acting. This was a rare chance for one to get cast in a major East Asian film … and that chance was handed to a hearing actress who has a lot of other opportunities.

Nice boy meets nice girl, boy is nice to girl, girl is nice to her sister. Nice boy of course does get worked up and nervous about how nice girl feels about him, and nice boy and nice girl even get into a petty conflict at one point in the film, but it’s pretty mellow. 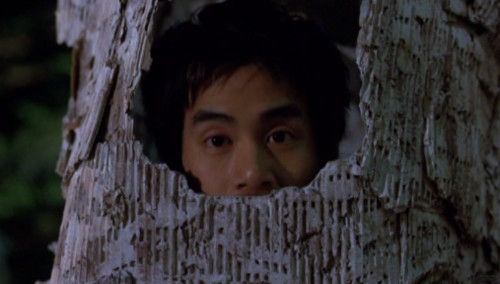 The most melodramatic event is when there is a fire which causes Xiaopeng to lose consciousness, go to the hospital, and messes up her breathing, which affects her swimming ability.

And that brings me to another point – the most intense relationship in the film is not the relationship between Tiankuo and Yangyang, but between Yangyang and Xiaopeng.

Tiankuo is insecure because he doesn’t really know Yangyang that well, and it’s implied that he has little experience with romance. Yangyang and Xiaopeng, however, have spent their lives as sisters, and the love and bitterness in their relationship comes from knowing each other too well.

But while intense, it’s a quiet thing. 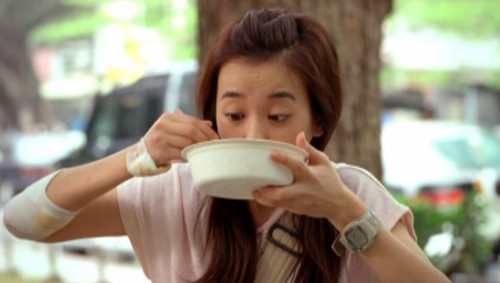 Or maybe it seems quiet to me because of the sign language after all. After all, now that I’m trying to describe the events of the film, they seem more dramatic than I remembered. Since I don’t know TSL, I had to read the subtitles, which meant I was not paying the fullest attention to the actors’ bodies, and I didn’t hear any voices supplying aural emotional cues.

Then again, it could be the acting. The acting does not seem as vivid and animated as the work I’ve seen by American Deaf actors when using ASL. That might be because the actors in this film aren’t native in TSL … or maybe Taiwanese deaf culture does not encourage emotional expressiveness as American Deaf culture.. 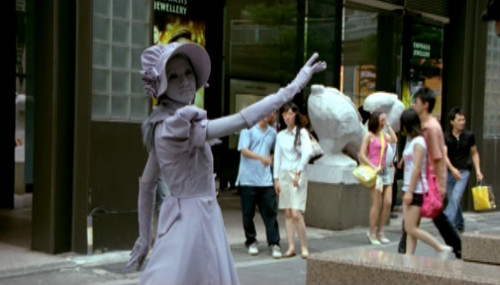 But whatever it is which makes the film seem ‘quiet’ to me, I like the quietness. Maybe I simply read/watch too many operas of various sorts (soap operas, sword operas, etc.) but letting the character feel as they feel rather than milking the pathos feels very genuine to me right now.

And of course, I love the sense of play throughout the film, such as when we discover what Yangyang’s job is.

There are two words in Mandarin, kàn​de​qǐ​ (respect / think well of) and ​kàn​bu​qǐ (not have respect for / look down on), which are so useful that I find it frustrating that English does not have any direct equivalent for these words.

The current running under this film is that many people kàn​bu​qǐ deaf people, a fact that Yangyang, Tiankuo, and especially Xiaopeng is very sensitive to. They are always concerned about people whether or not others will kàn​bu​qǐ them. For example, Tiankuo is worried about his parents accepting Yangyang. 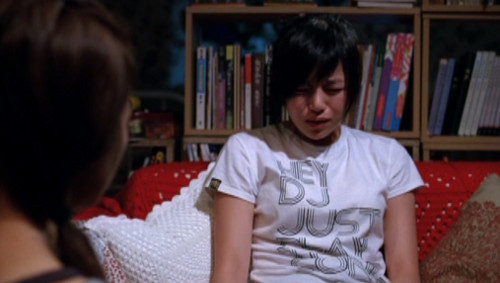 [Spoiler warning for this paragraph] The core of Xiaopeng’s resentment for her sister Yangyang is that she suspects, deep down, Yangyang, who is actually a hearing person, kàn​bu​qǐs her. When Yangyang insists that she respects Xiaopeng, Xiaopeng responds that she wants to be independent, she doesn’t want Yangyang to constantly sacrifice herself to care for her ‘pitiful’ deaf sister. And finally, if Yangyang really has respect for deaf people, why won’t she go out and become Tiankuo’s girlfriend (at the time, they both thought Tiankuo was deaf).

I am not deaf, but I understand how Xiaopeng feels.

As a non-Asian, the default assumption is that I can’t understand written or spoken Chinese. I can’t blame Taiwanese people for assuming this, since most of them don’t encounter enough foreigners to figure out that foreigners who live outside of Taipei/Kaohsiung probably know some Chinese. Even I have had to train myself, when I see another non-Asian, to not immediately assume that they need language help.

However, even after I have demonstrated my degree of Chinese ability, some people still continue to act like I don’t understand Chinese, or that I don’t know what I’m doing, even in situations when it turns out I was better informed than most of the other people present. They sometimes make things harder for me, and I would have been better off if they had completely ignored me, but usually, it just feels like they kàn​bu​qǐ me. Getting away from this is one of the things I look forward to on that future day when I leave Taiwan. 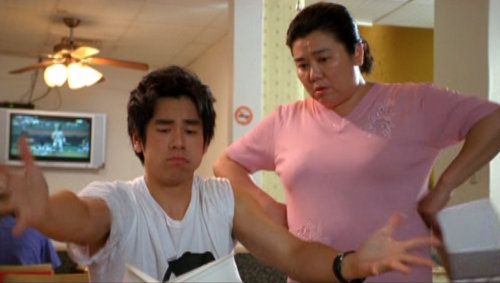 And what I’m describing is extremely minor compared to what Xiaopeng faces. I am merely irritated by various strangers. Xiaopeng is dealing with her own sister. Most importantly, my Chinese ability is not as deep into the core of my identity as being deaf is for many deaf people. Therefore, the cut goes in that much deeper.

And the irony is that Yangyang gets into a quarrel with Tiankuo when she assumes that he kàn​bu​qǐs her.

For some people, the cute love story between Tiankuo and Yangyang may be the main point of the film. But to me, the relationship between Xiaopeng and Yangyang is what stands out.

Alas, the film undermines its own point by failing to cast a deaf actress. If the film-makers really believed that deaf people are competent, capable people, wouldn’t they have cast one to play a deaf character? 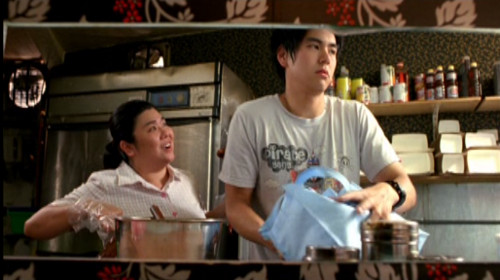 I have mixed feelings about this film. I would love to learn something about Taiwanese deaf culture – heck, I’d like to learn more about American Deaf culture (I would like to learn some ASL if I ever get a good opportunity to do so). And it’s clear that there was some input from the deaf community, since many of the ideas presented in the film are similar to ideas expressed by deaf people. It’s also a good movie from an entertainment point of view. But ultimately … it’s a film made by hearing people, about hearing people, and for hearing people. 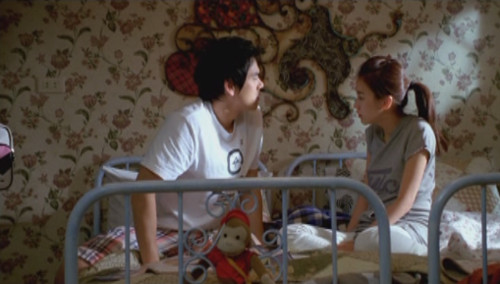 I obviously don’t have a problem with movies made by, about, and for hearing people, since that describes about 100% of the movies I watch. But most movies are not supposed to represent deaf people. This movie could have been a great cultural bridge between deaf and hearing people, but to me, it feels like a lop-sided conversation with the hearing people mostly talking to each other while occasionally bothering to listen to what the deaf people say.

Next Time: TBD (though I know it will be a manhua)

To learn what some people with various different disabilities think, last week was Blogging Against Disablism Day, which in previous years has included contributions from Taiwanese people (though not, IIRC, deaf Taiwanese people). On a completely different note, Sara visited the fort depicted in Cheerful Wind, which is related to why this post is so late. She met a Korean who was travelling all over the Penghu Archipelago by public ferry. She wishes she had enough spare time to do that, because she suspects that would be more fun than island-hopping by tour boat.