Welcome to the March installment of BL Bookrack! This month, Michelle takes a look at Where a Person Is Most Vulnerable at JManga, while Melinda checks out the latest volumes of Awkward Silence and His Favorite from SuBLime. In Brief: Punch Up!, Vol. 3 (SuBLime). 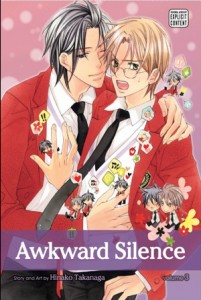 Awkward Silence, Vols. 2-3 | By Hinako Takanaga | Published by SuBLime | Rated Mature – As a somewhat finicky BL fan, I have a complicated relationship with Hinako Takanaga. Though I have several favorites among her works (You Will Fall in Love springs immediately to mind), I often find her romances too rushed to be satisfying (Little Butterfly). Furthermore, even some of my favorites of her work (The Tyrant Falls in Love) include elements I dislike so thoroughly that they send me hurtling from hatred to love and back again. Though Awkward Silence is far too mild-mannered a title to incite anything like hatred, its first volume fell easily into the “too rushed” section of Takanaga’s catalogue, thus robbing itself of the emotional resonance required to elicit anything close to love.

Volume two opens with blank-faced Satoru (who carefully reminds us every chapter that his face is incapable of expressing emotion) sulking over his boyfriend Keigo’s upcoming sleep-away baseball camp. Having been unable to properly express his feelings to Keigo before he departed, Satoru is tormented over the fact that Keigo may have left believing that Satoru was angry with him for going in the first place. Naturally, the only option is for Satoru to sneak into the camp in the middle of the night in order to explain himself. He does, and the two have sex.

Okay, a little bit more than that happens. Satoru’s antics lead Keigo’s baseball team to believe that the west wing of the school is haunted and minimal wackiness ensues, but the series’ chapters are so carefully formulaic, it’s obvious that the point of it all is to create an opportunity for the obligatory sex scene. And this is really the crux of the issue. While I certainly have no objection to sex scenes in a BL manga—and such scenes can contribute significantly to both plot and characterization—as is all too common in contemporary romance, Takanaga’s scenes are largely just… in the way. With so few pages available per chapter in which to develop her characters’ relationship, every panel is precious, and panels spent on perfunctory sex scenes are, frankly, nothing more than a waste.

Volume three plays a bit stronger, as it shifts its focus from Satoru and Keigo to a couple of amusingly mismatched upperclassmen (whose relationship vibe is not unlike Morinaga and Souichi’s in Tyrant), and Satoru’s charming (also blank-faced) mom is an unexpected highlight. But this relationship, too, suffers from a whirlwind approach that doesn’t feel quite earned. Takanaga’s expressive artwork particularly shines in this volume, making its shortage of emotional substance even sadder, in my view. Not recommended. 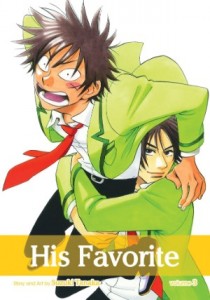 His Favorite, Vols. 2-3 | By Suzuki Tanaka | Published by SuBLime | Rated Mature – If I’m a sucker for any particular romance trope, it’s “friends-turned-lovers”—a predilection largely responsible for my obsession with writers like Keiko Kinoshita and Yeri Na, among others. In volume one of His Favorite, author Suzuki Tanaka proved that she’s got my number as well, with her story of childhood friends, Sato and Yoshida, whose developing “hot guy”/”spazzy guy” pairing is the best thing since Doumeki and Watanuki (with fewer ghosts and bento lunches).

In volume one, class stud Sato revealed to unpopular goofball Yoshida that he was the (once overweight, bullied) boy whom (once popular, badass) Yoshida fiercely protected all through grade school. Having nurtured a crush on Yoshida for years, Sato’s new “hot guy” status gives him the confidence to finally pursue Yoshida romantically, though the entire thing is baffling to both Yoshida and the rest of their high school class.

Volume two opens with Yoshida beginning to acknowledge that he has reciprocal feelings for Sato, though he’s desperate to hide it—not only from Sato, but from his group of misfit friends who expect him to share their unrequited longing for female companionship. This escalates in volume three when Yoshida is coerced into attending a disastrous group date. Meanwhile, Sato’s dealing with his frustration by bullying their classmates, whom Yoshida (in true form) angrily defends, leaving Yoshida feeling even more conflicted over his growing attraction for Sato. Nothing comes easy for the two of them, but despite the fact that what I’ve described so far sounds rather like a serious teenage drama, it’s absolutely romantic comedy in every way. And, really, that contradiction is what makes the series work so well.

Though nearly everything in His Favorite is deliberately overblown and played for laughs, the entire thing is firmly anchored by real emotional truth, which renders the series not only genuinely funny, but also genuinely affecting on a number of levels. Amidst the laughs, we really feel Yoshida’s inner turmoil over his unpopularity and small size, his fierce sense of fairness, and his developing feelings for a guy who pushes all his buttons in not-always-positive ways. And like Yoshida, we both love and revile Sato’s messy mix of loyal devotion and outright sadism. Tanaka’s characterization is deceptively effortless—clearly established with just a few deft strokes—allowing her to tell a emotionally complex story with the light touch of a screwball comedy. Even the story’s secondary (firmly comedic) romance, about a steadfast guy who only falls for sleaze-balls, manages to operate on multiple levels. And Tanaka’s clean, energetic artwork is just icing on the cake.

Obviously I’ve become a fan, but the best news of all is that there’s more of this series to come! His Favorite stands at five volumes and counting in Japan, so now’s the time to jump on board! Heartily recommended. 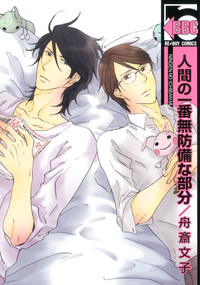 The anthology starts off promisingly enough. The title story is about neurotic Yamashita, who hates ants, and his bug-loving neighbor, Shimabara, who helps him overcome his fears a bit. “Strays Will Leave, Over and Over Again” is also pretty good, featuring a gigolo who keeps returning to his friend’s place every time he gets dumped. Less successful is “The End Is in a Dream, Silent,” about a guy who’s repaying a debt to a clotheshorse by cleaning his messy “room.” It’s okay, but extremely rushed.

In the titular story, the “place” in question refers to the delicate nether-regions where ants dared to crawl when Yamashita was a boy—as well as to his heart—but after the third story I began to think that apartments were somehow a theme, too. That while we might feel safe in our own homes, this complacency would also cause us to let down our guard. And it may even be true that Shusai meant to make some point along those lines, but the rest of the stories in this collection are so thoroughly disappointing that I soon began to doubt that such an intent ever existed.

Brief and insubstantial “Sculptures of Us” is about friends who get into fisticuffs over whether they had a drunken hookup the night before. “Love That Reaches the Other Side of Earth!,” about a seemingly hopeless boy and the childhood friend who takes care of him, had the potential to be something good, but is rushed beyond redemption. The real villain of the piece, however, is the horrible “Daddy, My Love” strip, all about the way in which a guy accidentally mistreats/mishandles his ex-girlfriend’s abandoned toddler, culminating with a panel suggesting they’ll become lovers in the future. EW! Gallon of brain bleach, stat!

So, are the first two stories worth 499 JManga “points”? I must regretfully conclude that they are not.

Punch Up!, Vol. 3 | By Shiuko Kano | Published by SuBLime | Rated Mature – For its first two volumes, I wasn’t quite sure what to make of Punch Up!. On the one hand were the well-defined protagonists, Kouta and Maki, who had plausible conflicts and insecurities, but on the other were the frequent and explicit sex scenes that left nothing whatsoever to the imagination. Was this a compelling drama or a smutty romp? Volume three caters to my personal preferences by establishing itself clearly as a drama (or melodrama, at least) when a workplace accident leaves Kouta with no memory of the last four years and effectively returns him to his mindset as a fifteen-year-old. This development could’ve easily taken the story in a cheesy direction, but it actually doesn’t, instead providing even more opportunity for conflicts and insecurities to flare. I had debated whether to continue with this series, but now I am truly glad I did! – Michelle Smith