MELINDA: That sounds delicious! Any manga to share this week along with your corn chex?

MICHELLE: As a matter of fact, yes! 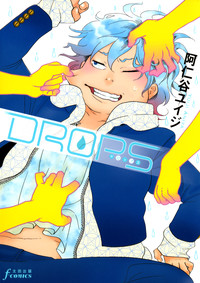 So, you might remember that in a BL Bookrack column from a year ago, I praised Yuiji Aniya’s Men of Tattoos. When JManga recently acquired another one-shot of hers, DROPS, I knew I had to read it. (I do note, however, that there’s no BL in this volume at all.)

Like Men of Tattoos, DROPS is a collection of interconnected short stories, this time about the members of the Matsuno family. The first, “A Taste of First Love” stars the youngest Matsuno, grumpy and chubby 15-year-old Shizuku, as he realizes that his first love has feelings for his pervy friend (and as he is utterly oblivious to the feelings another girl has for him). Subsequent chapters focus on Shizuku’s four older sisters and their romantic lives, while Shizuku himself grows older in the background. There’s a chapter about the twins, Kaede and Momiji, who are in search of a man they can share. One about Tsubaki, the rebellious second-oldest sister who has finally found a reason to stay at home. And one about Hisagi, the responsible eldest sister, who finally gets the chance to be selfish and irresponsible. By the time the final chapter rolls around, Shizuku is a 22-year-old hottie attending his friends’ wedding.

It’s probably Hisagi’s story I like best, as Aniya likens her life—slowly brewing, but becoming more delicious—to sake, but each is pretty entertaining in its own right. I like Aniya’s omniscient narration and some of the over-the-top comedy, and though there are quite a few sexual situations, they’re all light-hearted and character-driven. Also, I simply must share these panels from Tsubaki’s story, because they’re just so silly and awesome. 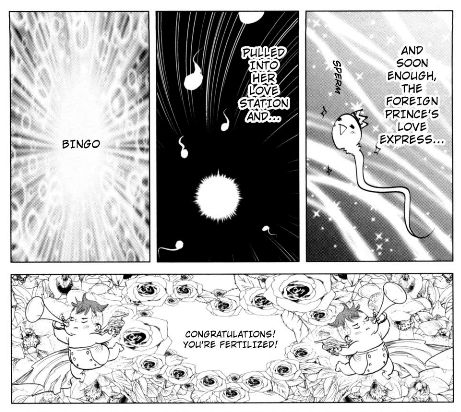 Ultimately, this was quite a fun read and one that probably didn’t have much chance of making it as a print edition. It’s very much a comedy, but one with thoughtful moments, too. I think I am officially a Yuiji Aniya fan.

MELINDA: I never read Men of Tattoos, and now I’m regretting that even more. This sounds like exactly my kind of short manga! I’m not a big fan of short manga in general, as you know, but interconnected stories are much more attractive to me, and I’m loving the sound of these. Also, those panels are delightful!

MICHELLE: These may be short stories, but as a whole they form something satisfying, so they don’t feel as skimpy as they otherwise might. I do think you’d like them! Join me on the Aniya bandwagon!

Anyhoo, I suspect you’ve got some manga you’d like to talk about, too!

MELINDA: I do, though my experience wasn’t nearly as satisfying! 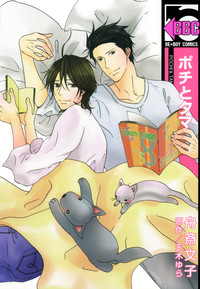 Normally I’d save this for BL Bookrack, but I have a pretty full docket this month, so since we’re all about JManga this week, I thought I’d talk about it here. After discussing the cute cover a few weeks ago, I decided to check out Pochi and Tama, a recent BL one-shot from Libre Publishing, created by Fumiko Shusai and Yura Tamaki.

Tama and Pochi have been a couple for six years, and they’re finally taking the big step of moving in together. They’ve been calling each other by the names “Tama” and “Pochi” since the very first time they were introduced, thanks to their cat and dog-like natures, respectively. Domestic life has its challenges—mainly Tama’s concern that Pochi is always taking care of him (and their apartment) without receiving any help from him—but mostly they’re a sweet, happy couple whose biggest worry is whether one of their womanizing friends might try to hit on Pochi’s refined little sister, Kana.

And… really, that’s it. Though I’m generally a fan of the rare variety of BL manga that focuses on established relationships over first love, without any significant conflict or some other catalyst for real character development, there’s just a bit too little going on to make this a satisfying story. Tama and Pochi are adorable, Pochi’s sister is adorable, and even the womanizing friends (who, in true BL form, end up having a thing for each other in the end) are pretty close to adorable, but there’s not much more to say about any of them. The most interesting moments in the whole manga are the one or two brief appearances by Tama’s awesomely straightforward female friend Mariko, which gets the book off to a strong start. Unfortunately, things peter out shortly after her exit from the page. Also, on a perplexing note, though the authors make much of the characters’ cat and dog-like personalities—a not-uncommon theme in BL manga— here in Pochi and Tama, it seems to be all talk. Neither of them displays any significant characteristics of these animals that I’m familiar with, making the whole theme of the thing feel very much on the surface.

I realize it sounds here like I hated Pochi and Tama, and that’s really not true. It is a perfectly pleasant manga filled with perfectly pleasant people, and there are some genuinely cute moments. But I’ll admit, I hoped for more.

MICHELLE: Oh, that’s too bad. It definitely looked really cute, but maybe it’s too cute, not enough substance. Because the characters have been in a relationship for a while before the story begins—and because of the kitty references—I wonder if you were expecting something as great as My Darling Kitten Hair.

MELINDA: You know, I might have been. And probably that’s unfair to Pochi and Tama, given how much I love My Darling Kitten Hair, but I can’t deny that I was disappointed.

So, would you like to introduce our mutual read for this week? 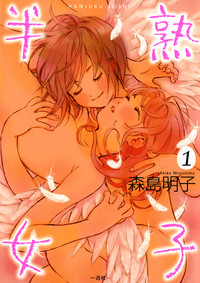 One of the many good things about JManga is their commitment to releasing yuri series. This week, Melinda and I read the debut volume of one of the most recent—Akiko Morishima’s Hanjuku Joshi, which seems to translate into “soft-boiled girls/women.”

Yae Sakura and Chitose Hayami are first-years at an all-girls high school. Without any boys around, the atmosphere there is quite relaxed and the first time we meet Chitose, she’s casually topless in the classroom. In contrast to boyish, uninhibited Chitose, Yae doesn’t like herself. She’s frustrated with her girly hobbies and feminine appearance and this results in her not seeming to enjoy herself much at school. Seeing this, Chitose decides to take Yae under her wing and help her have a bit more fun.

Friendship pretty quickly turns into chest aches and warm feelings, and after a promiscuous upperclassman accuses Yae and Chitose of merely playing at love, things start to get more serious between them. From this point on, the girls’ progressing physical relationship—and, indeed, it’s mostly physical, as when conflicts arise they’re swiftly resolved so that the making out can resume—is intercut with scenes of the upperclassman getting it on with a prim teacher.

I didn’t dislike Hanjuku Joshi or anything, but it’s not exactly emotionally subtle or complex yuri.

MELINDA: You know, I think I had the same reaction as you did for about the first half of the manga, but I actually really appreciated the second half, which delved more deeply into both relationships—that between Yae and Chitose and that between the teacher and the upperclassman, whose relationship is made more complicated by the men in their lives and the upcoming wedding of the teacher’s first love (also a woman). The teacher’s story is particularly poignant, as she comes to terms with the fact that, unlike her first love, she’s simply never going to be happy with a boyfriend. Fortunately, her new lover feels the same way, and though their relationship was first based on only sex, there’s obviously much more potential there.

The older characters (especially the teacher) are also openly envious of the two freshman, whose lives have not been complicated yet by the expectation that they’ll pair off with boys, and I felt like the juxtaposition of these two primary relationships is what made this particular yuri series feel to me like it’s written for women rather than solely as fanservice for men. Sure, there are a lot of sexy scenes in Hanjuki Joshi, but there’s also some real exploration of the characters’ actual sexuality and what it means for them in their lives.

On a personal note, I also really appreciated Yae as a character for her discomfort with her feminine traits—both physical and personality-wise. It’s something I struggled with myself a lot at her age, and it’s not something I’ve seen addressed often in fiction. You see “tomboy” characters all the time, but rarely girls who are something less neatly defined. Probably that alone was largely responsible for my enjoyment of this manga.

MICHELLE: You know, for all of its steamy scenes, I also never got the feeling that they were written purely for a male audience. And I too identified a lot with Yae and her body issues.

So even while it seems you liked this more than I did, I still liked it enough that I plan to read the second volume when it comes around.

MELINDA: Count me in for that as well!