SEAN: After three weeks that absolutely buried us in manga, it’s a relief to find that the last week of November is reasonably small. If only as I’m so far behind I may never catch up. Let’s see what we’ve got… 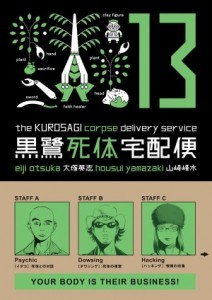 First off, I’m pleased to see that Dark Horse has reached Lucky Vol. 13 of Kurosagi Corpse Delivery Service. It comes out so infrequently but that makes us love it all the more, especially Carl Horn’s expert liner notes, which get more glib with every passing volume. Last time we heard that Karatsu and Sasaki were in Hawaii on a case, so I’m hoping that we see said case here.

MELINDA: I know I’m late to the party here, but I’ve finally started reading this series, and of course it’s just as good as you’ve been telling me all this time. I expect I’ll make it to volume 13 before the next one comes out, from the sound of it!

MICHELLE: I read volume one a long time and liked the characters a lot, but got really grossed out by one page in particular. I’ve never gone back to it, even though I own through volume eleven or so. One of these days!

SEAN: Kodansha has a few new things as well. Deltora Quest hits its penultimate volume, and is one of the few manga released here under the ‘kodomo’ genre – i.e. it’s for little kids in Japan.

Fairy Tail is in the middle of its big alternate world with personality-swapped heroes arc, and Vol. 22 will feature lots of fighting, I’m going to guess.

MICHELLE: I generally read Fairy Tail courtesy of my local library, but I’m glad to see it’s still going strong. It seems popular amongst the young adult patrons, as well.

SEAN: Finally, for those of you who may have missed out on Sailor Moon 1-6 when they were first released, there’s now a big box set. It has stickers! (But no new content.)

MELINDA: It’s a great time for them to release something like this, too. It’s a natural choice for probably every manga gift guide that’ll come out this year. 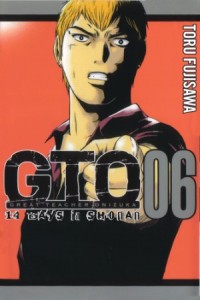 SEAN: From Vertical, we have GTO Shonan 14 Days Vol. 6. I’m not sure if these twins are going to be the final Big Bad, but they’re proving to be very difficult for Onizuka. Not that this is going to stop him at all, of course. It’s Onizuka, we know what’s coming. DETERMINATION (and some perversion).

MELINDA: Have I mentioned how much I love this series? I really love this series. It was one of my biggest surprises of the year, really. I wouldn’t have thought it’d be my thing, but it is—very much so. Can’t wait to read this!

MICHELLE: I echo your sentiments, but must point out once again how much Sean’s commentary amuses me. :)

SEAN: There’s also Vol. 2 of Limit, where I’m going to take a wild guess things are going to go from bad to worse.

MELINDA: I’m looking forward to this as well! Vertical’s been on a roll for me lately.

SEAN: Lastly, it’s not on the list, but Yen also apparently released Is This A Zombie? Vol. 3 two weeks back, and since it hasn’t shown up via Diamond yet I’ll give it a mention here. There is much debate about whether it’s a parody of magical girls/harems/zombie manga or just a mulched-up pastiche. I’ll let others keep reading it to make that choice for themselves.

MELINDA: I… Ugh. I have nothing more to say, really.

MICHELLE: I was totally going to write “Ugh.”

SEAN: All this plus the debut of the My Little Pony comic from IDW! What appeals to you turkey-stuffed individuals?