Oh, readers, it’s been fairly chaotic behind the scenes at Manga Bookshelf lately, and we’ve fallen behind in so many ways. In the interest of catching up ever so slightly, here are a few links that have piled up over the past few weeks: 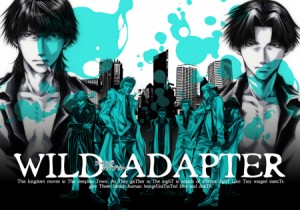 To my great delight, ANN recently reported that Kazuya Minekura’s action-packed BL epic Wild Adapter, which has been rerunning from the beginning in Ichijinsha’s Monthly Comic Zero-Sum since sometime last year will be resuming fresh serialization next spring, now that Minekura’s health is back on track. This is particularly big news here at Manga Bookshelf, where some of us (as you may recall) are very big fans.

Moving on from BL to Yuri, JManga is going all out for its new series YuruYuri. From their press release:

In celebration of the release, JManga has released a special “YuruYuri” feature including a character introduction and relationship chart, famous scenes, as well as a special article on Yuri manga by Erica Freidman (Yuricon, ALC Publishing). Additionally, JManga is holding a special quiz contest for YuruYuri fans from August 23rd to 29th (PST). Fans simply need to take the 4 question quiz, and get all the answer right, to be automatically entered into a special drawing for YuruYuri merchandise straight from Japan!

At CNN’s “Geek Out!” blog, Danica Davidson discusses why female readers are drawn to manga (spoiler: FEMALE CREATORS), including quotes from people like VIZ’s VP of Publishing, Leyla Aker, and super-librarian Robin Brenner. Definitely a must-read!

Lastly, a quick poll! A while back I’d talked to my fellow Manga Bookshelf bloggers about the possibility of opening up a discussion forum on the site. At the time, everyone agreed that limiting discussion to comment threads on our individual posts helped keep things focused and easy to manage, so I shelved the idea. Just recently, however, I’ve had a request from a reader that we open up a forum here, so I thought I’d bring it to the rest of you for discussion as well. Please note that in any scenario, we would be leaving our posts’ comment threads exactly as-is, rather than moving comments into the forum space, so the forum would exist as a separate entity for discussion.

My current ideas for what might happen in the forums include: reader reviews (best get promoted to the MB main page), demographic/genre-specific threads, tips for buying manga on the cheap, featured weekly topics, sharing your picspam, ‘shipper’s forums, fanfic recs, and more!

Note: Any discussion forum at Manga Bookshelf would be both fandom-friendly and highly moderated. We are, as always, dedicated to creating a safe space for all.

Please feel free to elaborate or share suggestions in comments! And please vote!