… And flights of chickens sing thee to thy rest.

MICHELLE Osashiburi, Melinda-san! I hope our readers didn’t think the Tokyo Babylon roundtable did us in!

MELINDA: Perhaps it did!

MICHELLE: But now we are back, rejuvenated by the awesome power of a much-beloved series coming to its end. 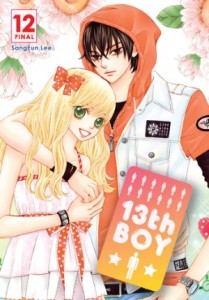 MELINDA: Oh, we are, we are! I’m sure most of our readers know by now just how much we both love SangEun Lee’s 13th Boy.

MICHELLE: Yes, we have been rather effusive with our affections! Perhaps we should note here that, as we will be discussing the twelfth and final volume of the series, there will be spoilers. It’s pretty much unavoidable. So, if you don’t want to know what happens, turn back before my next paragraph.

Still here? Okay, well, I have to say that my primary thought upon reading the end of the penultimate volume was, “No, Beatrice, no!!”

MELINDA: I can completely understand that reaction. I was pretty much there, too, though I also felt strongly that I already knew what was going to happen. I mean, let’s face it, the very first volume of the series tells us who Hee-So will end up with, if we’re paying any attention at all. In a way, I don’t even feel like this is a spoiler. And since I knew the only way for this to work would be for Beatrice to kind of… fold back into the person who created him, I knew it had to happen.

That said, I ‘shipped Hee-So/Beatrice with considerable verve, so the knowledge of this reality was a blow—and a hard one, at that.

On the other hand, I still loved watching this inevitability play out. Because SangEun Lee has given her heroine such awesome (and not entirely attractive) foibles, anything she goes through is both poignant and entertaining, and since Beatrice is so close to her heart, that goes double (maybe triple?) for her devastation over losing him.

MICHELLE: Yeah, I knew it was going to happen and that it had to happen, given the way the story was evidently planned from the beginning, but I still didn’t want it to happen. Heck, in the past I have read stories about Camelot and held a sliver of hope that maybe this time, things would turn out okay. 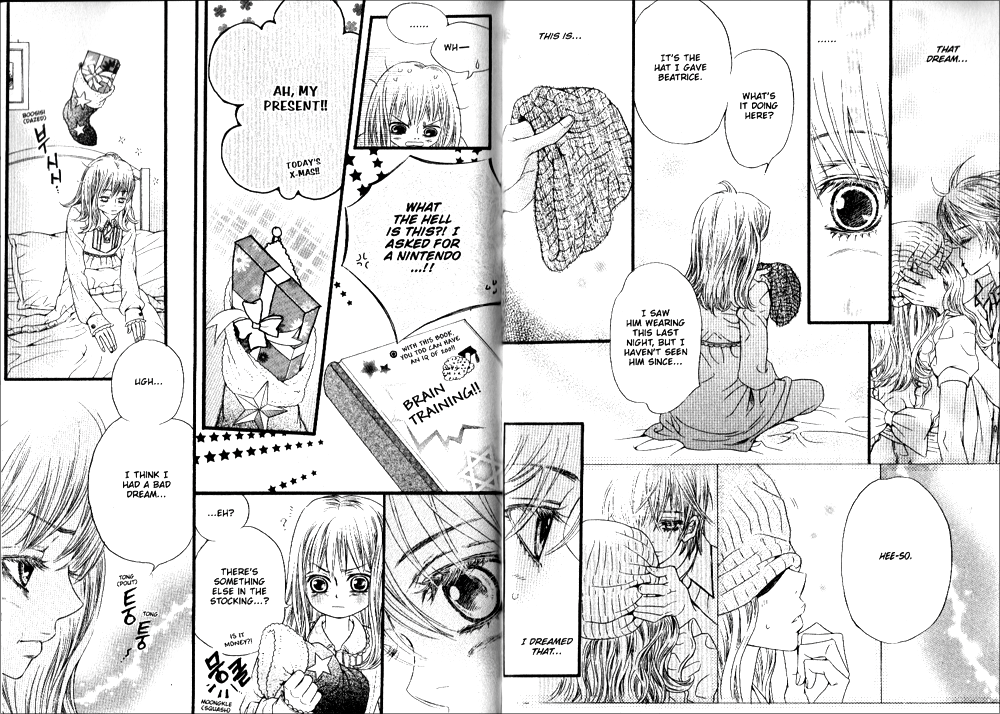 Maybe it’s all a dream? Sadly, no.

I definitely appreciated the extent of Hee-So’s grief. This whole situation reminded me of the latter third of Hikaru no Go, actually, when (spoiler!) Sai has vanished and Hikaru is castigating himself for not having valued him more when he was around. Too, I also thought SangEun Lee did a nicely subtle job of showing us that some of Beatrice’s traits live on in Whie-Young. For example, it seems that in addition to gifting a cactus with his love and devotion for Hee-So, Whie-Young also gave it his passionate love for fried chicken! So, when the boys merge back together and Whie-Young exhibits a craving, it’s actually kind of poignant.

MELINDA: Yes, yes! Details like the chicken craving really help bring home the fact that Hee-So actually hasn’t lost Beatrice at all, despite the hole he’s left in her heart. I also found Whie-Young’s journey to be pretty poignant, and as much as I loved Beatrice as his own entity, it was quite moving to see him finally get to be a whole person again.

On the topic of Hee-So’s pain, something I’ve been thinking about a lot lately—particularly after reading the first couple volumes of The Flowers of Evil, which is a very different series in some pretty obvious ways, but has one trait in common with 13th Boy—is just how much mileage an author can get out of managing to both mock and love her/his protagonist. In The Flowers of Evil, Shuzo Oshimi makes his protagonist believable as a teenager by allowing him to be pretentious and ridiculous and really making clear that this is what he is at this particular age.

Similarly, SangEnug Lee makes no bones about Hee-So being self-consiously dramatic (and also ridiculous) here in the series’ final volume, which ends up making her more sympathetic and relatable rather than less so for the reader. Watching Hee-So come to school every day in comically bundled-up mourning after the loss of Beatrice (visibly sweating in her seasonally-inappropriate garb, but unwilling to cop to that) only makes her grief feel more real, because man we all were that teenager at some point or another, whether it manifested itself the same way or not. I mean, on the face of it, 13th Boy‘s odd supernatural elements make it one of the strangest little romance series I’ve ever read, while Hee-So’s overblown teen angst also makes it one of the best. 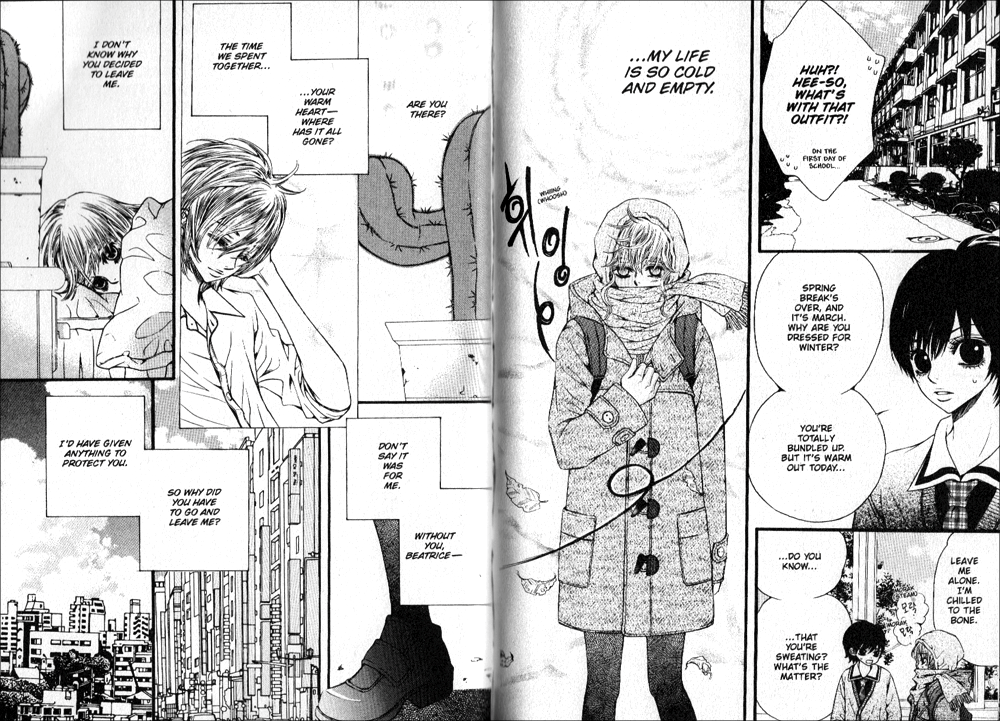 MICHELLE: There have definitely been times I didn’t like her much, but I’d be hard-pressed to say otherwise about any teenager I’ve known, myself included. Regarding Whie-Young finally becoming a whole person, I confess that it hadn’t occurred to me for the first, oh, ten volumes or so, that he was so aloof and unfeeling precisely because the caring, emotional part of himself had been removed. I just thought he was your run-of-the-mill slightly jerky love interest.

MELINDA: Yeah, Whie-Young’s progression as a character here and what he gains back from reabsorbing Beatrice into his person could perhaps be a metaphor for the childish sweetness and open affection often lost during puberty–and especially absent from many teen romance love interests. I don’t know if SangEun Lee was trying to comment on that deliberately, but it’s certainly there. And either way, I love the fact that he doesn’t get the girl until he gains back the part of him that makes him actually lovable. Maybe I’m suffering from some sort of shoujo-manga-fatigue (Black Bird-itis?) but it’s nice to see that jerky personality portrayed as genuinely lacking rather than romantic and mysterious.

MICHELLE: Definitely. And maybe one could think of it like Beatrice kept that part of him safe for a while so that it wasn’t completely destroyed but could come back to him when he was ready for it.

It seems that, ultimately, we are both satisfied with the ending, even though it’s a bit sad. Personally, I love sad endings and am always disappointed when creators don’t go for it. But it’s hard to find it completely sad, given that Beatrice’s cactus spirit still seems to be watching over Hee-So, and the infusion of comedy helps, too. I love that one of Beatrice’s concerns as he deliberates what to do is, “Will she know where I put the fried chicken coupons?”

MELINDA: Yes! Heh, even just hearing you bring that up in passing charms me as thoroughly as did reading it for myself.

Speaking of humor (though not entirely humor), I also really enjoyed the series of side-stories inserted into the end of the volume which bring us up to speed with some of the supporting characters. I particularly enjoyed seeing what became of Won-Jun and Sae-Bom, and I was pretty gratified to see that their weirdly codependent relationship does not last. I also loved the romance-novel interlude with Hee-So and Whie-Young. But probably my very favorite of the side-stories is one in which Hee-So’s judo-champion best friend Nam-Joo catches the eye of the cutest boy in school. I love it because, instead of being a story about her transformation into a more feminine, boy-catching girl (which is what I might expect from the genre), it’s a story about how much she kicks ass as herself, and why that makes her stand out. 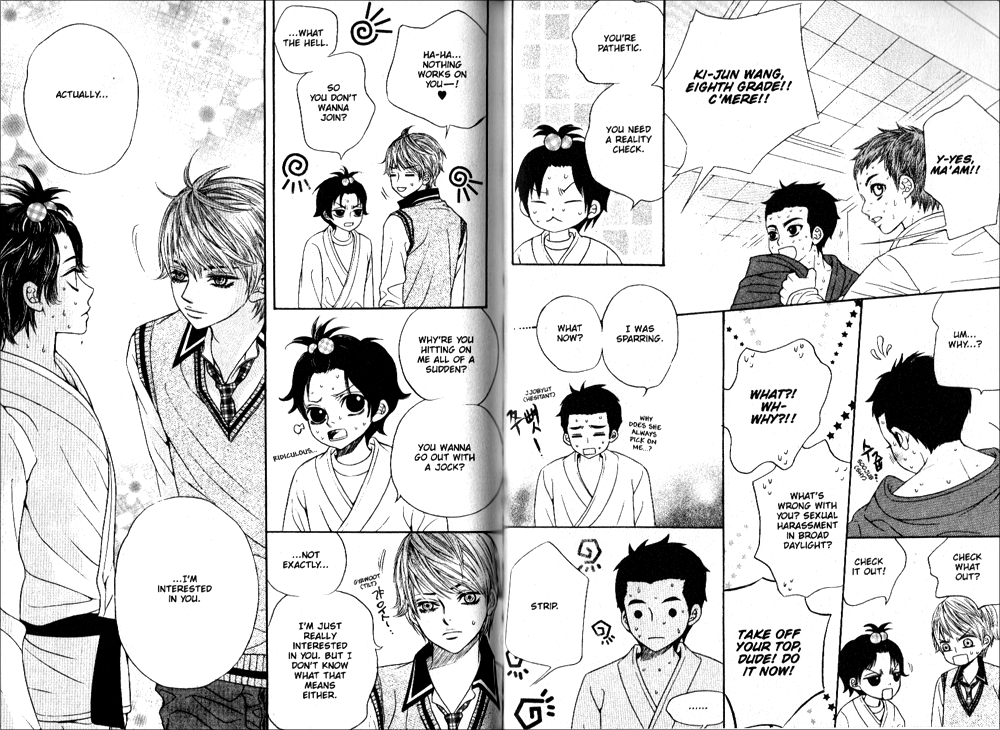 MICHELLE: I loved that story, too! Nam-Joo inspires the cute boy to action to earn her admiration, as opposed to the empty adulation he receives from other girls for simply being pretty. Have you seen any of the k-drama Secret Garden? It’s actually kind of similar, where a refined perfectionist kind of guy finds himself falling for a commoner stunt woman.

MELINDA: I haven’t! I’ll have to check that out!

It’s interesting that I like Nam-Joo so much, because she plays a role similar to that of Jun in NANA. And while as a reader who identifies strongly with Hachi, I often resented Jun’s judgements and advice, I don’t feel that way at all about Nam-Joo.

MICHELLE: Do we see Nam-Joo doing much talking critically about Hee-So behind her back? I feel like we see Jun do that several times—it’s been a while since I’ve read NANA—and that made her seem that much more judgmental.

MELINDA: That’s a good point. We see Nam-Joo lecturing Hee-So in person from time-to-time, but she’s definitely a loyal friend. In fact, the scene in this volume where she urges Whie-Young to tell Hee-So how he feels already (“Bring her back to life, okay?”) is a real favorite of mine.

MICHELLE: Well, loyal except for that episode early on that somehow involved Sae-Bom and which I can’t quite recall. But that can probably be chalked up to teen drama.

MELINDA: I can’t quite recall that incident either, but I have an urge now to re-read the series from the beginning. Perhaps my view of Nam-Joo will wither a bit then.

As we wrap up here, I’d just like to shed one final tear for my beloved Beatrice. *snif* We loved you, Beatrice! We ‘shipped you with your beloved! CACTUS LOVE FOREVER.

MICHELLE: I raise a chicken leg aloft in your honor! 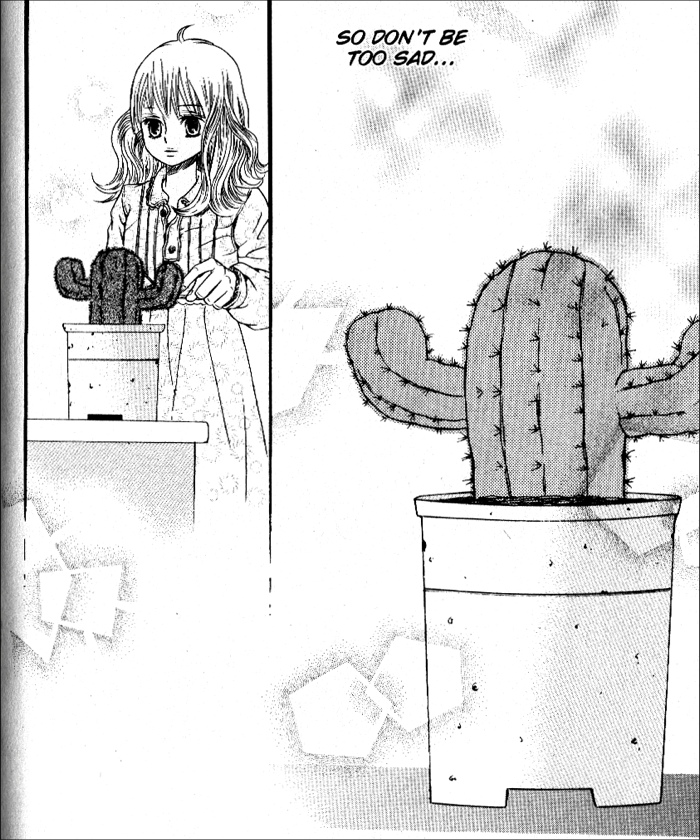