MICHELLE: Hey, Melinda! What does a vegan zombie eat?

MELINDA: I don’t know, Michelle. What *does* a vegan zombie eat?

MELINDA: You know, my husband actually predicted that one just now after I told him. :D

MELINDA: So, whose turn is it to start this week? Mine? Yours? I’m all turned around.

MICHELLE: I think it’s mine. 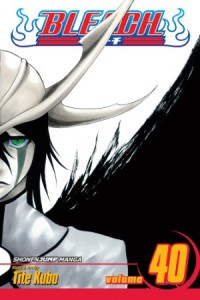 So, to start with… I wanted to talk about volumes 40 and 41 of Tite Kubo’s Bleach. You might wonder, “What else is there to say about Bleach at this point?” Well, I suppose what I have to say boils down to, “It’s actually kind of interesting again!”

There were definitely some volumes in this Hueco Mundo arc that were rather dull, but now that it feels we’re actually getting somewhere, I find that I’m pretty entertained. I still don’t care much at all about Ichigo, but I like his companions (Uryu and Orihime, most notably) and several of the Soul Reaper captains, who have also joined in the fighting. Plotwise, it’s your typical shounen fare—wherein people with special powers fight to protect those they care about—but it’s got momentum, it’s got a few themes that remind me of Angel (our friend occasionally becomes a monster but we will bring him back to himself), and it’s got some pretty striking visuals.

I think Tite Kubo must’ve had a lot of fun drawing these chapters, and also was probably in a fairly grisly mood, as the fights are easier to follow than normal and involve an excessive amount of limb loss. It’s shocking each time it happens, but still not quite as gross as what happened to Rangiku a couple of volumes ago thanks to the most genuinely terrifying manga monster critter I’ve ever seen.

Possibly I am not being critical enough. Bleach clearly has a lot of faults, chief among them that this whole Hueco Mundo arc is basically just a retread of the Soul Society arc. But I enjoyed these two volumes and look forward to the next pair, which will be here next month! In fact, we’ll be getting two new volumes of Bleach each month through December, which will bring us up to volume 53, just two behind Japan. A pretty smart move by VIZ, methinks.

MELINDA: Well, and is there really a point to being critical of Bleach anymore? Yes, it’s repetitive, and yes, it stopped having much new to do or say many volumes ago, but there are reasons we keep reading it. I find it interesting that we’re basically reading for the same two characters (Orihime and Uryu) along with some of the other Soul Reapers (I’m partial to Yumichika and Ikkaku, for various reasons), and we cling to these loyalties and to the bits of enjoyable characterization that still crop up from time to time.

MICHELLE: Exactly. I like Yumichika too, incidentally, and was happy to see him and Hisagi again. The fact that they’re both bishounen has a lot to do with that, I must admit.

Anyway, enough fangirling. What have you been reading this sweek? 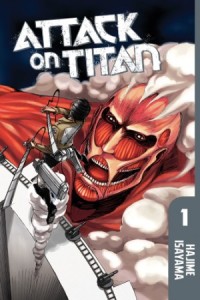 MELINDA: Well, my first selection for the evening is the debut volume of Attack on Titan by Hajime Isayama, due out in a week or so from Kodansha Comics. I will admit that I had low expectations going into this volume, based mainly on its cover art, of all things. When it arrived, I took it over to my husband, showed it to him, and said, “So does this look like my kind of manga?” He agreed that it decidedly did not, and I really had to force myself to pick it up later to actually read. And I’m glad that I pushed myself to do so, because as it turns out, Attack on Titan is my kind of manga after all.

So, the premise! The world has been overtaken by man-eating giants called Titans, and for the past one hundred years, what is left of the human race has been isolated in a single city, protected from the Titans by a series of three circular walls. The most powerful citizens (including the city’s king) live within the innermost wall, with everyone else spread out in neighborhoods within the more vulnerable outer walls.

As the story opens, the city’s garrison has become complacent, with no real threat coming from the Titans outside, thanks to the city’s very tall walls. Meanwhile, the few humans who venture outside the walls—the “survey corps”—are regularly massacred by the Titans. These people are generally considered to be fools. Why risk their lives, when they’re so safe and comfortable in their self-made prison?

Our hero, a young boy named Eren, dreams of joining the survey corps—an idea his family thoroughly rejects. But it isn’t long before a huge Titan manages to break through the wall, destroying Eren’s family life and leading him towards that dangerous path anyway. I won’t reveal more here, for fear of spoiling you, but suffice it to say that mankind’s one hundred years of relative peace and seclusion are pretty much over.

As I said, I enjoyed this volume, though it does have its weak points. While it seems clear that there are some characters here who will eventually be great, they aren’t great yet, and the opening chapters feel a bit sluggish and shallow because of that. Isayama also has a habit of creating a lot of small, single-face panels (especially when characters are arguing), which diminishes the tension of several scenes and makes them somewhat awkward to read. Furthermore, I found many of the action shots to be difficult to follow.

On the other hand, there’s a lot of really compelling stuff here, and regardless of any issues I might have had, I left the volume feeling anxious for more. Isayama’s world-building is genuinely intriguing, and though the volume ends on a fairly dark note, it plays as exciting rather than simply grim.

MICHELLE: Interesting! It actually kind of reminds me of Battlestar Galactica, in that “we think we’re safe because they haven’t OMG we’re most of us dead now!” kind of way.

MELINDA: That’s a good point! It does have that vibe, though without the spectacular characterization. But I’m hopeful that will develop here, too. 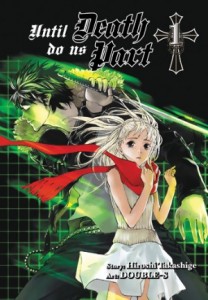 MICHELLE: Actually, I had a very similar experience with the first volume of Until Death Do Us Part! I didn’t really think it wasn’t my type of manga, but I certainly didn’t know anything about it and was a little dubious about the premise. I admit that I haven’t quite finished the chunky omnibus (comprising the first two volumes of the Japanese release) but it’s very intriguing so far!

The story begins when a blind guy (whom we later learn is named Mamoru), testing out some tech that projections 3D renderings of his surroundings onto his retina, is hailed as a savior by a girl (Haruka) who has been held captive by yakuza types because she possesses precognitive abilities that allow her to win the lottery a bunch of times. Turns out, he’s a swordsman with a special molecule-cutting katana (naturally), and saves her, beats up the yakuza, etc. So far, so standard.

What’s really neat is that this whole time, Mamoru’s communicating with someone back at headquarters, and it turns out the two of them are part of a vigilante group called the “element network.” This group has been put together by the victims of crimes—funded by wealthy ones, supplied with gadgets by scientific ones…—and recruited Mamoru to be its agent. While he’s out and about, they observe his video feed to make sure he stays within crime-hunting parameters.

True, we’ve not learned much about the characters so far, but the premise is nifty enough to sustain me! Plus, I like the art (by DOUBLE-S). It’s not terrifically unique, but the fight scenes are easy to follow (yes, this is another manga with swords and blood and tendon-slicing) and the character designs distinct. I’m looking forward to seeing how this develops.

MELINDA: You know, I’m really glad you brought this book to the table this week, because I kind of had decided that it wasn’t my kind of manga, and you’ve encouraged me to reconsider. That actually sounds like a lot of fun.

MICHELLE: I’m glad you think so! I mean, again, I have no idea where the story is going from here and, like you, have no idea if deeper characterization will emerge, but it’s definitely got potential. 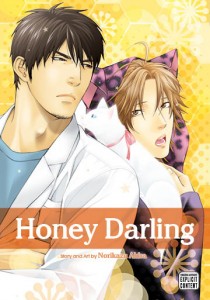 MELINDA: Standing in stark contrast against my first title for the evening, this week I also read Norikazu Akira’s Honey Darling from Viz Media’s new BL imprint, SuBLime. I don’t think it would have been possible for me to choose something less like Attack on Titan than Honey Darling, and I’m surprised to have liked them both.

As I mentioned in Monday’s Pick of the Week, as happy as I am to see Viz taking on the BL market, I have to admit that their titles so far have not been at all to my taste. Even the surprisingly delightful Oku-san’s Daily Fantasies is, fundamentally, everything I like least about BL manga (unless you count Love Pistols, which is apparently everything I like even less). So when I was greeted by a cover featuring one angry looking dude alongside a very feminine-looking dude in cat ears, I was not optimistic. I’m not even sure I would have opened the book at all had the cover not also featured an actual (really cute) cat as well.

Nor does this manga have a promising start. Carefree drifter Chihiro, on his way home from his low-pressure job in a casino, finds an abandoned kitten on the street and impulsively takes her home. Of course, he quickly finds himself in over his head as the kitten becomes ill, and he ends up wandering the streets aimlessly, asking strangers for directions to the nearest animal hospital. Fortunately for him, one of these strangers turns out to be Kumazawa, a handsome, broody guy who also happens to be a veterinarian. Kumazawa takes Chihiro and the cat back to his clinic and scolds Chihiro for not being a responsible pet owner, at which point Chihiro starts to cry, leading Kumazawa to suddenly offer him a job… as his “wife.”

As you might imagine, my confidence in Honey Darling plummeted even further at this point. Yet somehow, by the end of the next chapter, I was completely won over.

Though this story strays not even a little bit from standard BL ridiculousness (including all the maddening seme/uke business), it somehow also manages to be really, really charming. Chihiro and Kumazawa’s relationship develops slowly and sweetly, and though everything is just a bit too easy and pat, it’s so warm and dear, it hardly matters. Akira’s characters are a pleasure to get to know, and by the end, I was wishing I could spend yet more time with them. And despite the cat-eared cover, the story’s humor lands just right as well, achieving genuine chuckles without descending into camp.

Honey Darling may not ever become a long-standing favorite, but it was certainly a pleasure.

MICHELLE: That’s good to know! I feel that you’ve encouraged me in kind to try something I might otherwise have been dubious about!

MELINDA: It’s an evening of surprises all around, I guess!

MICHELLE: Perhaps this would be a good time to tell you that I’m really a man.