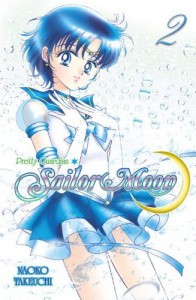 “Pretty Guardian of Love and Justice in a Sailor Suit! Sailor Moon has arrived!!”

I would be lying if i said I haven’t been looking forward to this review. Specifically, because around fifty pages into this volume we are introduced (reintroduced?) to Sailor Venus, aka Minako Aino, the first Sailor Senshi. Her adventures are chronicled in two volumes of Codename: Sailor V. When she popped up, I had only started on the first volume of Sailor V, so on the advice of a friend, I stopped reading Sailor Moon until such time as I finished Sailor V. Well, I’m glad I did, but I would caution that you don’t need to do the same in order to enjoy the second volume of Sailor Moon. Returning to my original point, the reason I’m looking forward to this volume is that the team building is over, the villains are known, and now we are ready for the real fights to begin.

This volume explores the concept of pre-destiny, particularly in regards to the finding of the Princess and the Legendary Crystal. Turns out that our heroes have done this sort of work before. I will endeavour to explain without ripping the lid off the plot. Usagi finally understands why she’s been thinking the way that she has about Tuxedo Mask, and her worldview is shattered as a result. The team is in the middle of a battle with the Dark Kingdom’s latest flunky, Zoisite, when one of their allies is injured. This causes the Moon Kingdom’s Princess Serenity to appear at which time she displays an enormous amount of energy. When the dust has settled, the team is changed forever and only a trip to the moon with Luna’s and Artemis’ (Sailor Venus’ familiar) help will answer their questions. But even after that clarification, the team is still fighting above their weight. I like how they stay together inside and outside the battlefield. They might be reeling from the blows, but they’re still standing. I can’t help feeling that this is a different fight they face due to Sailor V’s warnings and her emphatic statement that this evil must be destroyed for good. This theory is backed up by what the team learns on the moon. It’s a lot to take in, but Takeuchi keeps things moving fast. About two-thirds into the book there’s a brief respite, but it’s short-lived.

Looking at this from a guy perspective, I would say that I feel for Usagi and Mamoru so badly. They are tentatively trying to find their way toward how they feel about one another, but their intertwined destines keep being thwarted. I get now why people used to say to me that I was too dismissive of the series. For me, as someone who likes to write creatively, I think I understand where Takeuchi might be going with this. The path to true love is never easy in real life, harder in the realm of fiction, and almost impossible when it involves the fate of the world in the balance. So is Mamoru and Usagi’s love doomed to the void? Possibly, but I think the idea behind this volume might be that true love cannot be stopped, merely diverted. Also, if I’m going for broke, I would say the idea behind the first volume would be that big things start with something small and/or you are not as unimportant as you believe yourself to be. But, returning to the story, Takeuchi seems to be saying in this volume that not only are the Senshi going to have to deal with setbacks but also, potentially, casualties as well.

I wonder, though, how meaningful it is for me to write about Sailor Moon, given that I’ve been aware of the title for ten plus years but never really got into it. I am trying to imagine how young girls (and indeed guys) reading this in Japan at the time might have felt. Add to that my differing cultural heritage and the gulf gets wider by the minute. But my quest is not in vain, I hope. Alexandre Dumas wrote more than 150 years ago of the value of friendship with comrades in arms, Gandhi wrote and spoke of the fact that tyrants, while invincible for a time, always fall, and a Canadian filmmaker once commented that there is no fate but what we make for ourselves. The Sailor Senshi face a difficult task but the battles they face are universal and common. They have happened before in reality and fiction, they are happening now, and they will happen again.

Nearly seventy years ago, my grandfather’s brother stood on the beaches of France. He was fighting in a foreign army for a cause he believed in. When the ramps dropped and his squad ran onto the beach, he did so knowing what was asked of him. At a critical moment, however, the enemy directed a heavy machine gun at his squad mates. Without any thought for himself, he stood and took the hail of bullets. I presume that afterwards his squad returned fire. As to how accurate that account is, I have to trust the report my grandfather’s family received. In Sailor Moon, Usagi stands in front of the enemy protecting Tuxedo and her friends and laying down a burst of energy at her opponent. She does so because the thought of losing her friends and the one she loves is too much to bear. It is there that she discovers her inner light and does what it is her heart requires—much like a soldier taking the brunt for his team because the thought of losing his friends and failing his loved ones is too much for him to bear.

It’s funny how 200 pages of printed paper with drawings and letters can stir things in you that you had never considered. The weaknesses of this volume, such as the massive amounts of exposition, the somewhat Jason and the Argonauts-esque level of “Kill! Kill! Kill them all!!” of Queen Beryl and the Dark Kingdom, and the fact we still haven’t seen much character development for the other girls can be negated by the fact this is (or feels like) the opening salvo for the war that’s coming. I suspect it will be fought with the population being unaware, and that makes me appreciate Takeuchi even more as a writer. To fight for people and have them know of your achievement is one thing. It is another to do so without the issuing or request of acknowledgement. The question I pose myself is: would I do the save if the situation called for it? Would you?

As I’ve said, I love the artwork and I can’t fault it. If these pages were pastels or watercolours, I would happily have them on my wall. Just as the first volume has a lot of serene moments this one does too, but now they are happening within the story-building moments and the action scenes. It’s a hard act to follow. The Internet continues to punish me for not discovering Sailor Moon sooner, as original art books by Takeuchi-sensei command higher than normal prices. Even if I weren’t broke, I would still be unable to afford some of them.

There aren’t as many liner notes from the translator this time around. I chalk this up to the pace of the story. Thanks for the crisp job, Kodansha. This volume maintains my high opinion of the series and moves into a new direction. If proof is required of my enjoyment of the series, I start volume three tonight and have ordered volumes four and five. So far my experiment at this shoujo malarkey seems to be working.