What’s the first thing that comes to your mind when you think of food manga? Is it shounen fighter series? I didn’t think so… 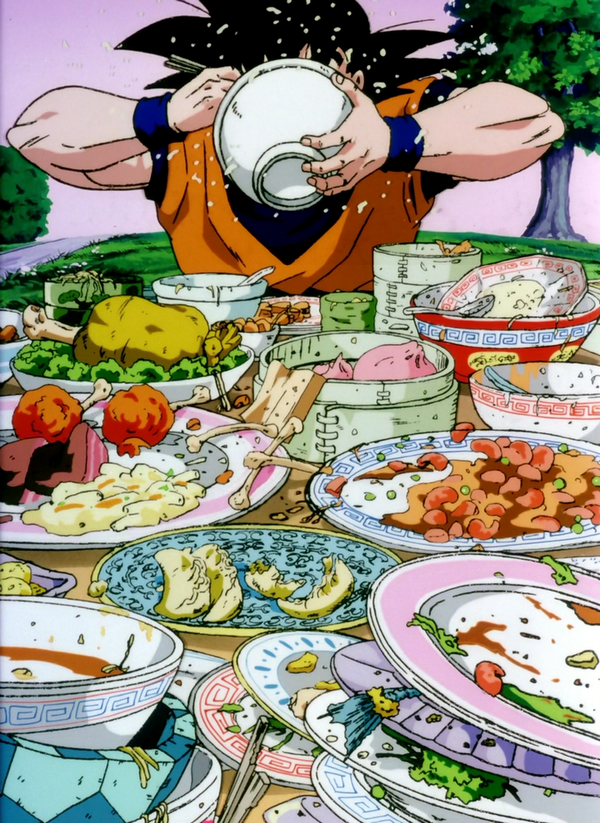 Huh. I guess it would be kind of up there. Surprisingly enough, food is actually a major part of many shounen fighter series. Take for example Goku, Luffy, and Natsu, who are well known for consuming insane amounts of food. Or Naruto, who has a ravenous hunger for ramen. Or Yoshimori (from Kekkaishi) whose hobby is baking cakes. In some way or another, many shounen protagonists are connected to food, to the point where the big eating hero has become something of a trope. Mitsutoshi Shimabukuro took that trope and based an entire series around it, giving us Toriko. 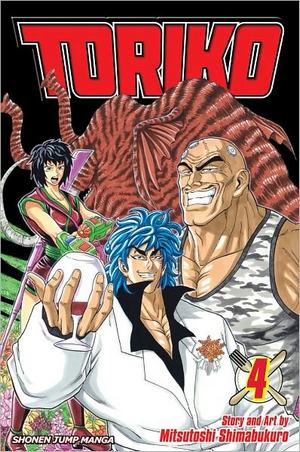 What Happened?
Toriko and Komatsu visit Biotope 1, a place where rare gourmet ingredients are kept and studied, at the request of the International Gourmet Organization (IGO). While there, they discover an gladiatorial ring that pits rare and powerful creatures against each other as the rich and famous bet on the outcomes of the matches. When a pregnant Battle Wolf is pitted against four of the most vicious creatures in the world, Toriko steps in to protect the wolf while it gives birth. In the panic caused by Toriko breaking open the protective dome around the coliseum, a strange individual calmly remains sitting. Director Mansam confronts him, but he is attacked by the stranger, who reveals himself to be a GT Robot. 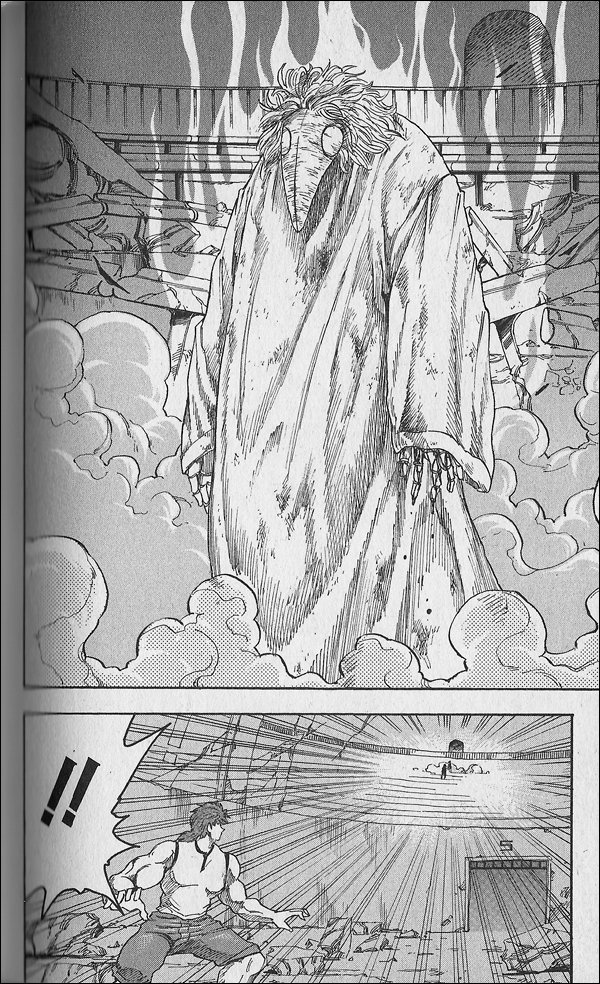 While Toriko and the Battle Wolf deal with an enraged Devil Python, the Battle Wolf finishes the beast off immediately after giving birth, only to be struck down by the GT Robot’s laser. 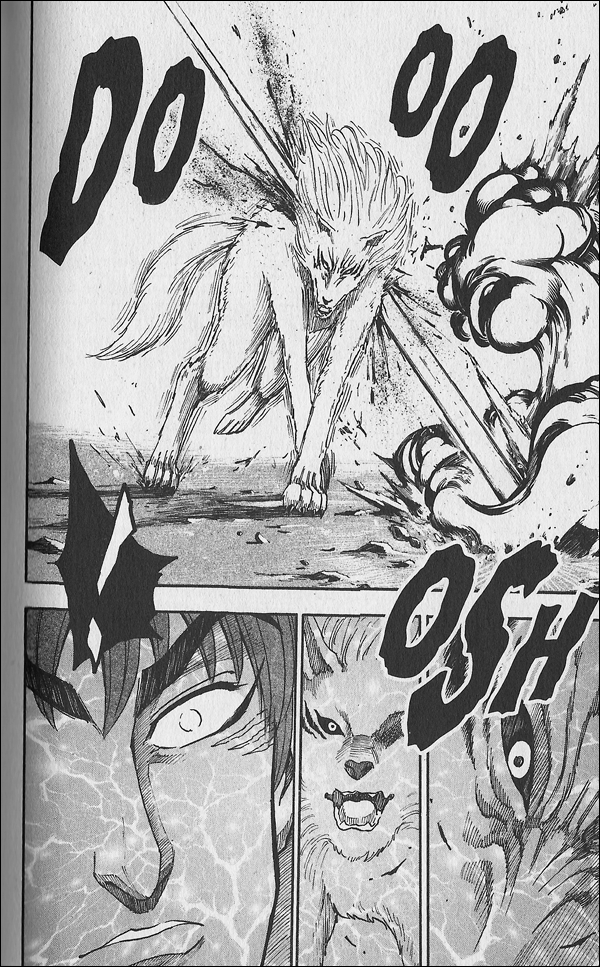 What Happens?
Toriko, enraged by the GT Robot’s sneak attack on the Battle Wolf, faces off against the machine. None of his attacks do any damage, as the robot is made of a Titanium alloy—even its joints are reinforced. Toriko, after taking some gruesome damage, goads the robot’s controller into using his most powerful attack. Doing this exposes his only weak point, the laser array inside his head, and Toriko takes advantage of that moment of weakness with his most powerful concentrated five fold spiked punch. 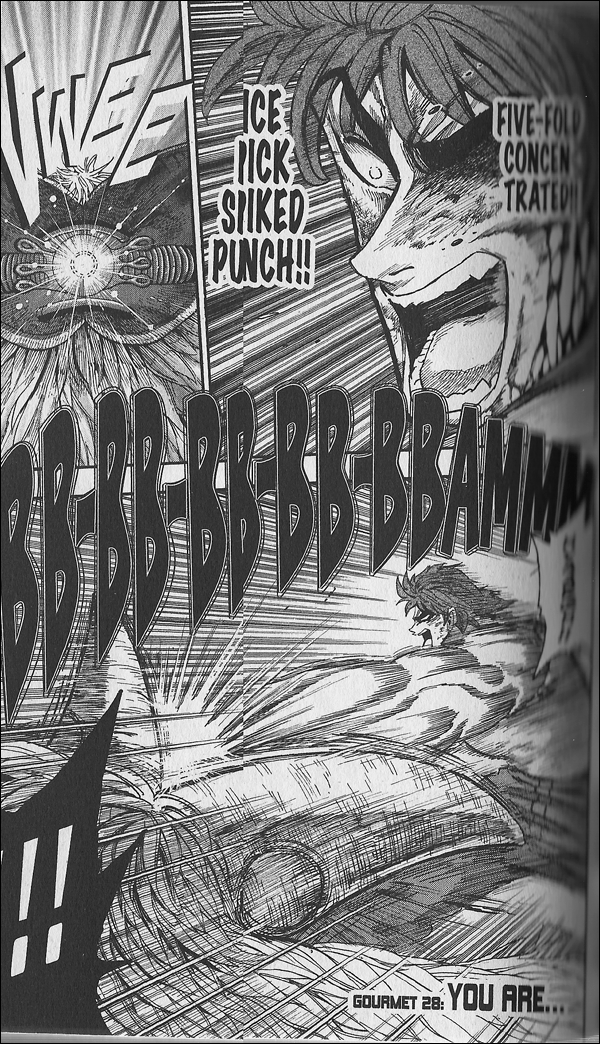 What Does it Mean?
This early on in the manga, Shimabukuro is still exploring the extent of Toriko’s power. He manages to create a fight that not only is a legitimate challenge for his hero, but also allows him to expand his strength. Toriko has three basic attacks available to him; Knife, which allows him to use the edge of his palm to cut through almost anything; Fork, an attack that uses the tips of his fingers to give him great penetrative strength; and the Spiked Punch, which comes in scatter and concentrated varieties, and has a power level that can be adjusted depending on how many times he punches.

As far as fights go, this one is surprisingly short. The GT Robot is shown as being indestructible, and then Toriko finds a way to enjoy it. Sometimes brevity is best, in this case it most certainly was. Toriko is still in the early stages of his development, but he is also still in the stage where he can take care of most opponents with relative ease. The fight is almost elegant in its execution. It uses the basic elements of a shounen battle: an overwhelming opponent appears who apparently cannot be beaten, the hero takes some damage, and finally the hero discovers the power within himself to overcome his opponent. Toriko takes that framework, which usually spans several chapters in most series, and condenses it down to barely two chapters. It’s shounen battle at its most basic.

While it isn’t uncommon for the hero to defeat his opponent by discovering a new power, Toriko instead adapts his already established attacks, modifies his fork attack into a more penetrative icepick, and uses what he already has to defeat his enemy. He shows intelligence in how he fights, taking his ability to absorb incredible amounts of damage and marrying it to an intelligent mind, making him one of the tougher shounen heroes around. 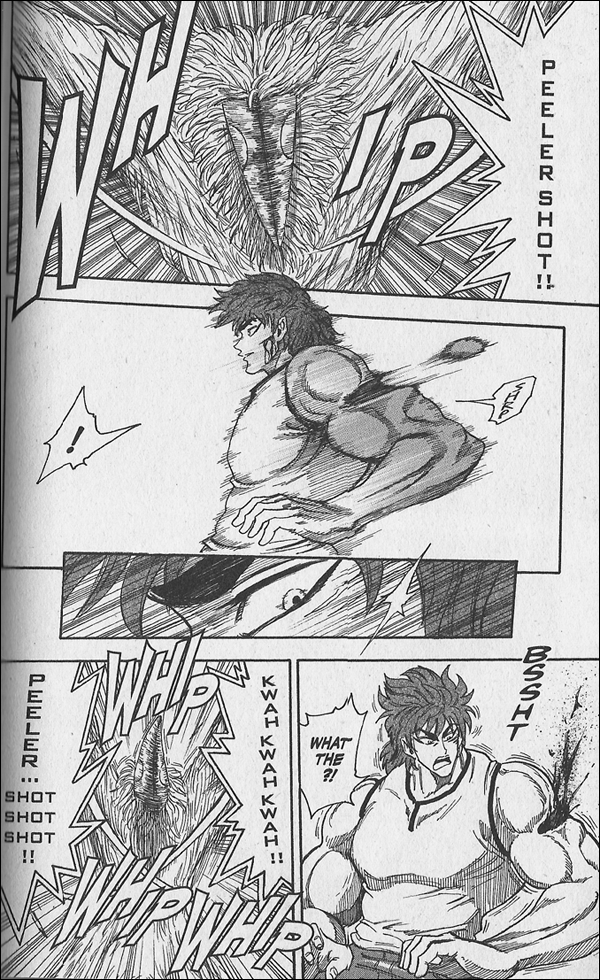 The framework by which all shounen battles work, shown so elegantly in this example, is crucial to a good fight. The way in which it is executed determines the enjoyment of the fight. Fights that don’t follow this basic framework tend to suffer pacing issues. Because a good fight is like a good mystery, the method in which the hero overcomes his foe is crucial. And sometimes it can be something as simple as using the tools they are given that provides the reader with the most satisfaction.