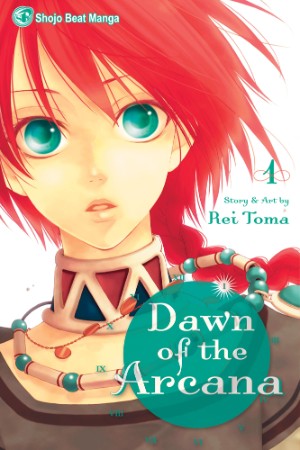 “Today, I belong to the enemy” — so begins Dawn of the Arcana, a medieval fantasy in which a feisty princess marries into a neighboring country’s royal family. Nakaba characterizes herself as “a lamb,” sacrificed by her people to help two warring kingdoms maintain a fragile peace. Her husband, the handsome but insolent Prince Caesar, initially snubs his new wife; not only does she have red hair — a commoner’s color — but she also flouts palace conventions, wearing the traditional dress of her homeland, employing a male Ajin (humanoid) as her valet, and excoriating Caesar in front of his servants.

Adding fuel to this combustible situation are Caesar’s mother, a Lady Macbeth figure who urges her son to seek the throne; King Guran, her husband; Cain, Caesar’s half-brother; and Louise, Cain’s flirty fiancee. Nakaba is keenly aware of their contempt for her, and struggles to maintain her composure as they openly mock her and threaten her faithful servant Loki. Though Loki is devoted to his mistress, he, too, poses a danger to Nakaba, as he quickly antagonizes Caesar and Guran with his impulsive behavior.

As predictable as the plot may be — would you be surprised to learn that Caesar soon becomes smitten with his ginger-haired bride? — Dawn of the Arcana proves engaging nonetheless, a heady mixture of palace intrigue and romance. Nakaba, in particular, is a winning heroine: she’s tough and principled, but savvy enough to appease Caesar and his family when it suits her own agenda. (Early in volume one, for example, Nakaba slaps Loki after a tense stand-off between the prince and the valet, telling Loki, “Disciplining my husband is my duty!”) Nakaba’s enemies are two-dimensional at best, but each displays a Joan Collinesque flair for making Nakaba’s life miserable, spitting out their lines with gusto. (“You look wretched!” the queen exclaims upon seeing Nakaba in her people’s native costume. “Typical red-hair!”)

What gives Dawn of the Arcana its real dramatic juice, however, is the way in which Rei Toma draws parallels between Nakaba’s situation and everyday teenage experience. Anyone who’s ever transferred to a new school, run the gauntlet of a junior high school cafeteria, or been hassled for wearing the “wrong” clothes will immediately recognize herself in Nakaba’s shoes. Sitting at a royal banquet, for example, Nakaba squirms under the withering stares of her new subjects. “I can feel it,” she thinks. “The hatred. The curiosity. The sneers.” In an added note of realism, Toma depicts Caesar as two-faced, the sort of fair-weather friend who openly mocks Nakaba in public — where nasty comments score points with his family –while privately acknowledging her sincerity and courage.

If I had any criticism of Arcana, it’s that the artwork is unimaginative. The character designs are attractive, with careful attention to costumes and hairstyles, but lack personality; I’d have difficulty distinguishing Rei Toma’s work from other popular shojo manga artists’. The minimalist backgrounds are likewise disappointing, doing little to situate the story in a particular time or place. Perhaps that’s a deliberate decision on Toma’s part, an attempt to make Nakaba’s story seem more universal. Given the sloppiness with which the establishing shots are rendered, however, it seems more likely that architectural details and landscapes aren’t her forte.

Still, that’s a minor criticism of an engaging story — one that benefits from a terrific premise, an intelligent heroine, and a supporting cast that wouldn’t be out of place in a juicy historical soap opera like Rome or The Tudors. Recommended.