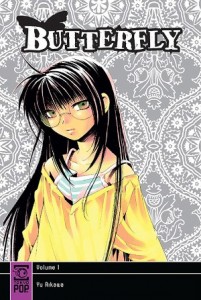 Reading Butterfly won’t change your life, make you a better person, or cause subtle but significant changes to South American weather patterns, but it may just restore your faith in Tokyopop’s ability to suss out smart, entertaining series that quietly subvert genre conventions.

The genre in question is what I call “seeing dead people,” in which a teenager struggles to cope with the unwanted ability to interact with ghosts. Normally, these long-suffering teens see spirits everywhere, but Genji Ishikawa, Butterfly‘s protagonist, sees only one ghost: his older brother, who committed suicide after pushing a girl into the path of an oncoming train. Though Genji would like nothing better than to have a girlfriend, his tragic past and rumored ability to speak to the dead proves irresistible to classmates with an interest in the paranormal.

Genji has another problem: he’s ¥600,000 in debt, more than he could hope to earn through an after-school job. When a peculiar girl approaches him with a money-making proposition, he reluctantly accepts, only to renege on their agreement when he realizes what he’s being asked to do: tangle with ghosts. Or, more accurately, tangle with what Ageha’s clients believe are ghosts; she has the ability to make people’s fears take corporeal form, and expects Genji to “kill” these projections for her clients’ benefit.

Though Ageha is a type we’ve seen before — manipulative, preternaturally calm, faintly androgynous — her abilities put an interesting twist on the “seeing dead people” premise. She clearly profits from her deceptions, but her fraud is, at bottom, a useful public service, one that allows shopkeepers, frightened swimmers, and hotel chambermaids to resume their normal routines after a catastrophic event, even if these “exorcisms” don’t actually help the dead cross over to the afterlife. As mercenary as Genji finds Ageha, her success forces him to to consider the possibility that his own spiritual powers are less a bane than a blessing, that he has an obligation to develop and use them, rather than deny their value.

The only downside to such an ambitious premise is that Yu Aikawa needs almost every page of volume one to establish the basic parameters of her story. Some of the exposition is handled gracefully; the details of the brother’s death, for example, are revealed slowly and casually, forcing the reader to piece together what happened to him with little authorial guidance. Some of the exposition is handled clumsily, however; Ageha and Genji’s first few encounters seem more like job interviews than spontaneous exchanges of information, an impression that isn’t thoroughly dispelled until one of their ghostbusting gigs goes awry.

Narrative hiccups aside, the story that’s beginning to emerge in the later chapters of volume one is compelling, a supernatural mystery that explores its characters troubled emotional lives with the same thoroughness as it dispenses with pesky spooks. Recommended.