Regular readers of Manga Bookshelf will need no introduction to House of Five Leaves. Melinda listed it as one of her best new seinen series of 2010, Kate has reviewed all three volumes, and David himself wrote a smart little ode to it recently when he reviewed volume two. For those of you still new to the series, House of Five Leaves is Natsume Ono’s seven volume samurai story. The main character, Akitsu Masanosuke, referred to in the series as Masa, is a masterless samurai determined to change himself while looking for work in Edo. One afternoon, Masa is hired by a suspicious man named Yaichi as a bodyguard. But all is not as it seems: Yaichi is actually the leader of a band of kidnappers who call themselves “Five Leaves”, and he doesn’t just want Masa to be his bodyguard — he wants Masa to join them as a comrade in crime. Masa, by nature a righteous and naïve man, resists Yaichi’s attempts to draw him in. However, he soon finds himself entangled in the fate of Five Leaves and, more importantly, in the mystery of Yaichi.

There are so many wonderful things about the anime adaptation of House of Five Leaves that it’s hard to know where to start. Thankfully, Natsume Ono’s distinct art style makes my job easier. Manglobe and the series director Tomomi Mochizuki transferred Ono’s art effortlessly into animation. The character designs are instantly recognizable, especially in Masa’s wide, childish eyes and Otake’s playful lipsticked smile. The sweatdrops, stray hairs, and blush lines of Ono’s characters are rendered in loving detail in every episode. There are even moments — the candy pieces of episode four, the pillars of the bridge in episode twelve — where the lines look like calligraphy, as if they were penned by Ono herself. 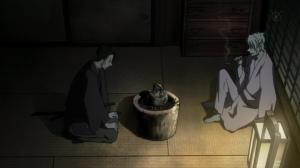 Often anime simplifies manga artwork. House of Five Leaves, the anime, does the opposite. While the manga tends to be very “white” on the page, full of negative space, the anime is full of textures: the unpolished wood of Goinkyo’s home, the tatami mat of the Katsuraya house, the smooth rice paper doors of Ume’s restaurant. Even more impressive is the interplay of light and shadow in the anime. Characters constantly move in and out of candlelight, open doors to let in sunlight, or sit with their backs to a window, hiding their faces in the dark. Ono is no slob herself when it comes to lighting in the manga, but the anime takes full advantage of its color palette — earthy browns and subdued gray-greens — to make Edo come alive.

The soundtrack features a combination of rumbling drums, wistful koto melodies, and reedy flute-like tunes that helps ground us in a historical Edo that, amazingly, never comes off as antiquated or forced. Likewise, the voice actor choices are almost flawless. Daisuke Namikawa as Masa is exactly the kind of guy who wears his heart on his sleeve and never says anything less than what he means. Veteran voice actor Takahiro Sakurai’s performance as Yaichi is by turns teasing, seductive, spiteful, and, at his best, all three at once. A shout out must be given to Masaya Takatsuka, who never misses a beat conveying Ume’s my-bark-is-worse-than-my-bite personality, especially in episode three when Ume makes a crack at Matsu. But the anime adaptation goes that extra mile: if you listen carefully, you can hear Edo in the background, in the soft drone of water boiling in a kettle, or the river streaming past, or the birds of Goinkyo’s backyard, or the shuffling of Yaichi’s wooden shoes. Ono’s manga might not think to comment on the “shaaa chhk” sound of a rice door sliding open or the faint crackle of straw as Ume unloads their latest hostage out of a basket, but it would be a pity to go through this anime without appreciating these little details.

At first glance, House of Five Leaves is about the journey Five Leaves takes from a ragtag group of misfits to a family who looks out for their own, even when there’s no money involved. For lack of a more nuanced, less cheesy word, the story is heart-warming. The more you uncover the crisscrossing ties of responsibility that connect the Five Leaves members, whether it be the reluctant life debts Matsu shoulders or the reason Ume remains in Five Leaves, the more you enjoy seeing them together at Ume’s restaurant, making fun of each other as they drink sake. Sadly, the anime does cut out one of my favorite scenes from the manga so far (Ume and Matsu bickering in volume one), and I imagine the later episodes similarly streamline forthcoming volumes. But the heart of the story comes through unscathed, which is a testament both to the strength of Ono’s writing and Manglobe’s talent at adaptation. 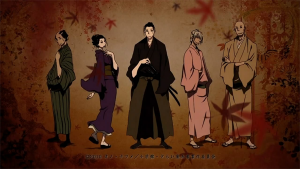 Underlying this story, though, is another tried and true theme: appearances are deceiving. Yaichi shows up in the first episode as a sage and benefactor to Masa, so naturally Masa, along with the viewer, looks upon Yaichi as a voice of authority. When we meet Yagi, the police chief who seems to know more about Yaichi than he lets on, we’re immediately suspicious of him because Yaichi tells us to be. But the more that’s uncovered about Yaichi, the more we realize Yaichi is the unreliable one. Just as Ume, Matsu, and Otake are more virtuous than the criminals we first meet them as, Yaichi is not at all the kind-hearted character we first encounter. In fact, he’s the most dangerous one of them all.

The anime has restructured the pacing of Ono’s series, favoring episodes that end on jarring cliffhangers and jumps in the timeline, often through flashbacks. Some might prefer the more measured pacing Ono shows in the manga; others might find the anime benefits from a more coherent focus, especially when it comes to Yaichi’s storyline. I for one felt like I could guess the events of episode twelve from the flashback sequence in episode one — a flashback sequence, I should add, that does not exist in the manga. But anime being the inherently action-based medium it is, I can’t fault Manglobe for wanting to ratchet up the tension just a little on what is, overall, a slow-moving story.

In the end House of Five Leaves is one of those series that I enjoy for reasons I can’t put into words. It’s not plot driven, and the characters never really change, even if they become more well-rounded. Certainly Masa never learns to get over his fear of being watched and remains the clumsy, shy samurai we first meet. But there is a marvelous je ne sais quoi to House of Five Leaves, an atmosphere of rambling down a countryside path on a late autumn afternoon, knowing that you’ll get to your destination eventually but not really knowing when. The anime luxuriates in that feeling. You could spend your time trying to piece together all the threads of the story, but you’d be missing the point. It’s meant to be savored, like a dango shared with a friend while hungry.

P.S. Next month’s anime adaptation will be Antique Bakery, just in case you haven’t had enough of stories about people making their own families. As always, if you have any anime you’d like taste-tested, drop me a line.