MICHELLE: After spending last week’s column discussing the grim misanthropy of Osamu Tezuka’s Ayako, Melinda and I decided to go a more frivolous route this time. The idea was actually mine, inspired by a list of new Harlequin titles available on eManga.com. Upon perusing said list, I noticed a pattern. See if you can spot it, too!

Out of nine titles, three reference pregnancy, three mention weddings or marriages, and two mention billionaires! One mentions a millionaire, but obviously that guy is just not trying hard enough.

Neither one of us was willing to relinquish our claim to the first title on the list, so we both read that one as well as a second choice. (Mine comes from a second, more recent list, which has fewer billionaires but more brides.)

How did you enjoy your foray into romance, Melinda? 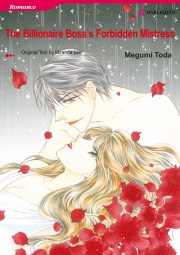 MELINDA: Well, Michelle, first off I have to say I was a little disappointed that my first pick, which was listed originally as The Billionaire‘s Boss’s Forbidden Mistress contained a typo, because I was pretty interested in finding out just who the billionaire actually was in a story that was apparently all about his boss’s forbidden mistress. Alas, the mistress indeed belongs to the billionaire, though I’m not sure what makes her forbidden.

Two years ago, Leah was in a car accident that cost her two things, her mother and her husband’s love. Her mother died in the accident, as one might assume, but her husband, the bastard, was driven away by a new scar on Leah’s leg. When a young billionaire, Jason Pollack, buys the company Leah works for, she’s intrigued by him, but too embarrassed by her scar to give in to her feelings. Jason is a widower, still in love with his late wife, but attracted by Leah’s beauty. In the end, the two of them enter into an affair, Leah because she’s just so happy that any man wants her with her scar, and Jason because… well, he just thinks she’s hot. Both claim to be uninterested in love, but what happens when their feelings change?

Though someone could certainly write a really touching romance with these characters–a woman whose self-esteem has been destroyed and a man looking for solace after the death of his wife–author Milanda Lee has not done so, or at least it’s nowhere evident in Megumi Toda’s adaptation. Like much of the Harlequin manga I’ve read, nothing’s given enough time to feel actually real, and as a result, the romance falls flat. Both Leah and Jason’s traumas are too quickly dismissed to gain any kind of traction, rendering the whole thing too sloppy and shallow to be genuinely enjoyed.

MICHELLE: I think a story all about a billionaire obsessed with his boss’s (a trillionaire?) mistress would probably be more interesting than the story you describe. It seems to be a trend that the wrong guy for the heroine in these romances can’t just be a decent person with whom things don’t work out for subtle reasons; he has to be as shitty as possible, like a husband who ditches his wife because of a frickin’ scar.

MELINDA: Right?? And it’s not like that part isn’t, y’know, poignant, but then when the heroine gets into a loveless relationship just because she’s been so broken by that first, wrong guy, I’d like to see a little more impact. If you’re gonna go for that kind of over-the-top drama, at least use it.

I realize that one of the hardest things to do as a writer is to make a whirlwind romance feel genuine. It’s one of those things that, done well, is plainly exhilarating to read. Unfortunately, if it’s not done well, it just feels empty and not at all romantic.

So, how did you fare with your pick?

MICHELLE: Ai Yazawa could give her lessons on the dramatic potential of choosing the wrong guy! As for my pick, I fared a little better than you did, though I’ve got some of the same complaints. 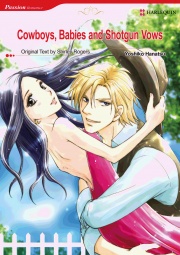 I had originally intended to read Claiming His Pregnant Wife, but when a second round of Harlequin offerings appeared, containing a book entitled Cowboys, Babies, and Shotgun Vows, I ditched my first choice faster than a chick with a scar. (By the way, I told my husband about the husband in your book and his response was, “What a hosebag!”)

Ashley Bennet, the daughter of a rich oil tycoon, never received love from her father and stepmom. Rather than object when her father proposes an arranged marriage, Ashley is bowled over to have someone actually telling her he loves her. Too bad she catches him boffing someone else on their wedding day. She runs off and ends up drunk in a bar, where she meets an earnest cowboy named Ryder McCall. They enjoy a one-night stand and Ashley goes off to be a waitress in a diner.

Ryder, however, is convinced that he loves her and tracks her down. Ashley is dubious, because Ryder is acting like a presumptuous fool, but then reveals she is pregnant. In Harlequin romances, guys are always happy about this. “Yes! This is awesome!” cries Ryder. Ashley’s not on the marriage bandwagon, but eventually takes an accounting job at the McCall farm. Through proximity to Ryder and silly scenes like watching him be kind to a lost kid in a store for, like, two pages, Ashley decides she loves him. Martin the ex-fiancé returns and expresses a desire to get back together (and also informs Ashley that she’ll be having an abortion), but Ryder punches him. Yay! Now they are in the love.

Seriously, this really tries to be good. Ashley is not a wilting flower, which I appreciate, and there are some attempts at humor. Its biggest flaw is, like you mention, everything just happens too fast to feel genuine! I’m a very slow reader, and when I can blow through a story in twenty minutes, then you know it is pretty flufftastic material.

MELINDA: I do have to wonder if the original novels delve a little deeper, just because they have more time? I think part of the problem with these manga adaptations is that they almost feel more like summaries than stories. I mean, I assume if I went in and actually read Cowboys, Babies, and Shotgun Vows it would read almost exactly as your description did, without a lot more time taken at any particular point.

MICHELLE: Yeah, this is one where I actually have some interest in reading the original to see how it compares. You make a great point about my description being about as thorough as the book itself is, because that’s true. That scene where Ryder demonstrates his capability to be a good dad, for example, quite literally takes all of two pages. The end result is just too simplistic to be believable.

Should I take a stab at summarizing our tandem pick, Marriage Scandal, Showbiz Baby!?

MELINDA: Oh, you know I love it when you summarize!

MICHELLE: I will do my best! 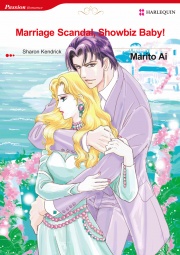 Two years ago, when famous Italian actor Mateo D’Arrezo was in England doing Shakespeare, he came across a local actress named Jennifer Wallen starring as Ophelia in a production of Hamlet. He was instantly smitten by her ability to refrain from being instantly smitten by him, and they start dating. Eventually they marry, even though her mother warns that all men are scum. The marriage does wonders for Jennifer’s career, but she’s no longer the wide-eyed girl Mateo originally fell in love with.

Busy schedules and a scheming manager keep them apart, and when a photo of Mateo kissing a co-star is published, Jennifer assumes the worst and initiates divorce proceedings. She still loves him, though, and when they run into each other while in Cannes to promote a film they made together, they end up getting it on in an elevator. Guess what happens next? If your answer is, “They make a showbiz baby,” award yourself a taco!

Mateo, of course, is delighted by this news. He’s being so sweet and solicitous that Jennifer learns to trust him again and even when the vengeful co-star claims to be pregnant herself, Jennifer’s faith in him remains firm. After a little bit of peril for the baby, they apologize to each other and admit their mistakes. The end.

MELINDA: Excellent summary, m’dear. So. Okay, here are a couple of my particular issues with this story. First, I find the amount of time Mateo spends defending his betrayal as “just a kiss” seriously laughable. I mean, come on. It’s only cheating if he sleeps with her? Making out with other women is totally kosher?

Secondly, what was up with totally dropping the ball on the scheming manager? They make all this fuss about how the guy is keeping Jennifer’s calls from getting through, but then… nothing happens. The manager’s not upset they’re back together. Mateo seems unconcerned that his staff has nearly ruined his marriage. The whole thing is just… dropped. What’s the point of inserting that kind of melodrama if you’re not even going to make anything of it? GIVE ME MRS. DANVERS OR GIVE ME DEATH. Or something like that. You get my point.

MICHELLE: I was sure there was going to be some explanation by which Mateo was not even responsible for the kiss, but at least that didn’t come to pass. And you’re totally right about the asshole manager. Mateo doesn’t even chew him out for his actions. This is the same guy who basically said that Jennifer neglected her husband (how dare she pursue her own career!) and should expect a little infidelity. What specific grudge he has against her isn’t mentioned and, in fact, he’s the one who takes Mateo to see her perform in the first place.

MELINDA: I have to think that the manager must be a little more deliciously evil in the novel. Or at least I’m going to go on pretending that’s the case, because overall, this story was a least a bit more solidly put together than The Billionaire Boss’s Forbidden Mistress.

People should really be clear on this fact though: we fought over who would get to read this manga. That’s how excited we were over the title alone. I have to say, overall, it wasn’t worth the fight.

MICHELLE: Yeah. Now I regret all that hair-pulling I did. But this does lead to another point on which people should be clear, which is that although neither of us is really a Harlequin reader, we didn’t approach the endeavor with the intent to just make fun of Harlequin or anything. I always want to like whatever it is I’m reading, and I certainly didn’t hate these or anything; they were just disappointing.

MELINDA: Yes, that’s absolutely the case. I love romance, I really, really do, and I always want to like these when we decide to dig into them. I expect we haven’t quite given up on them yet!

MICHELLE: I expect you’re right. Maybe next time we should try ones with more staid titles, like Pilgrim’s Castle. Though probably it is light on actual pilgrims.

MICHELLE: I don’t know; at least they probably wouldn’t be accepting pregnancy with a cavalier attitude!

MELINDA: Perhaps not, but I’d hate to see the outfits. And the dialogue? I think we’re better off in billionaire showbiz boss territory.

Check out more Harlequin manga at eManga.com. And join us again next week for an all new Off the Shelf!