This week, we take a look at some recent releases from Viz Media and Tokyopop.

MELINDA: So, here we are again, ready for our usual column. Is it just me who’s thinking, “How can we ever top the boobs episode?”

MICHELLE: Actually, it’s a relief to me that this week’s column is boob-free! Not that I refuse to consider the notion of a sequel at some point down the line.

MELINDA: So, what boob-free fare have you been gratefully consuming this week? :D 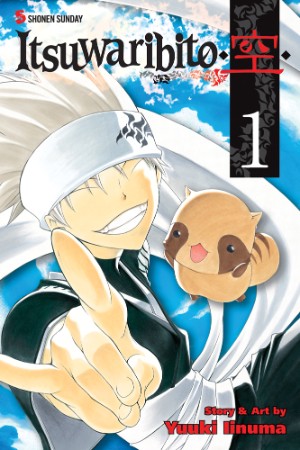 MICHELLE: Completely at random, both manga I plan to talk about are written by someone named Yuuki! First up is the debut volume of Itsuwaribito, by Yuuki Iinuma and published under VIZ’s Shonen Sunday imprint.

As a child, Utsuho Azako was so trusting that he innocently divulged all the details about the layout and defenses of his home to a group of bandits, which resulted in mass slaughter. Now in his adolescence, he’s being cared for by a monk in the “Valley of Orphans” and maintains that it’s better to be an itsuwaribito—one skilled in sneaking, tricking, beating, and stealing—than to be an honest fool. When the valley is the target of still more bandits and everyone except Utsuho is killed, he resolves to use his gift for lying for good and to save a thousand people in the kindly monk’s stead.

Utsuho heads out on his journey and quickly encounters a talking tanuki caught in a trap. The tanuki, whom Utsuho christens “Pochi,” is positively adorable. Trusting to a fault, he keeps falling for the trick of a hunter who claims he will return Pochi’s mother if Pochi will meet him at a certain time and place, which provides Utusho his first chance to help someone by lying. Afterwards, he and Pochi help a reluctant bandit leave his gang and a young doctor to save his patient from the sway of a charlatan.

Aside from one particularly nice moment—when Utsuho invites Pochi to travel with him, he says, “We’re not related by blood so it’s not true. It’s a lie, but I’ll be your family”—Itsuwaribito is pretty uninspiring. The villains are as superficial as they come, and there’s no suspense at all as to whether Utsuho will best them. In a bizarre juxtaposition, these silly, tongue-lolling foes are also apt to dispense some fairly graphic violence. It’s very strange because this feels so much like a teen-rated title, until the top of someone’s head is being sliced off.

I haven’t completely given up on Itsuwaribito, but I would say this is probably something to investigate via the library before committing to purchase.

MELINDA: Well, I think teens generally appreciate things like heads being sliced and so on. :D I admit this title looked uninspiring to me, even on a surface level. I’m sorry to hear there’s not much more to dig for. 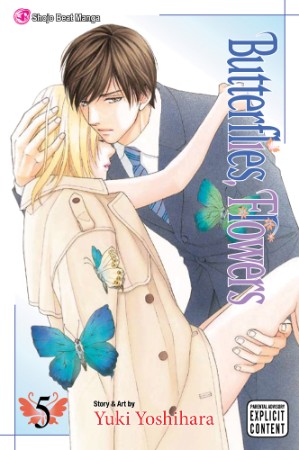 MELINDA: Ah, no. Definitely no woodland creatures, and the only joke I can think of to follow that up with is dirty, so I’ll refrain. I do have a Yuki, though! First off this week, I made good on one of my promised second chances by reading volume five of Yuki Yoshihara’s Butterflies, Flowers. Though I’d really enjoyed the first volume of this series, things went rapidly downhill for me as I became unable to stomach some of the story’s sexual politics. Still, after having privately decided to dump the series, continued praise from some folks whose taste I usually share made me wonder what I was missing.

After promising to give it a second chance, I picked up volume four, and was shocked by how easily it won me back to the series. That volume completely charmed me by being made up of mostly the same smart, over-the-top comedy that wooed me in the first place. So when Viz sent me volume five for review, I was actually looking forward to digging in.

Surprisingly, the volume launched itself from pretty shaky ground, beginning with a couple of chapters devoted to Choko and Masayuki’s collective angst over whether or not to live together. Though there were a few laughs sprinkled throughout these chapters, the storyline veered a bit too much into serious romance mode for me to fully enjoy them. Fortunately, the story’s next chapters (revolving around Masayuki’s sudden onset of impotence) jumped right back into comedy, which is definitely my preferred tone for this series.

Though Yoshihara continues to push my limits with regards to controlling men as romantic leads, she really satisfies my sense of humor, and that’s difficult to beat. All told, I’m glad I gave this series a second chance, and I’m genuinely looking forward to more.

MICHELLE: This is excellent news! I’ve been planning to catch up on this series myself, and now I’m even more motivated to do so. One of the things I particularly remember from the earlier volumes is Masayuki’s abrupt changes in character between domineering jerk and solicitous sweetie. It was hard to get a handle on his personality. Any progress in that arena in recent volumes?

MELINDA: He’s still both of those things, definitely, but Yoshihara is dealing with him pretty well by making fun of his vulnerabilities pretty mercilessly. That definitely helps to put the domineering jerk in his place. :D

So, what else have you got for us this week? More woodland creatures? 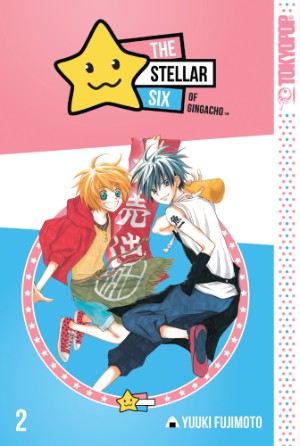 MICHELLE: No, no woodland creatures, but no shortage of cuteness despite their absence! My second pick is the second volume of The Stellar Six of Gingacho, by my second Yuuki, Yuuki Fujimoto.

As you know, this is a slice-of-life story about six friends who grew up helping out at their parents’ shops along the Gingacho Street Market. In the second volume, we fast forward a little so that everyone has now just entered high school. Structurally, this volume is very similar to the first, including a couple of chapters in which the friends band together to help out a neighbor in need, first at a flower shop being victimized by a vandal and then at a short-handed bento shop that’s swamped at its grand opening.

These are lighthearted stories, saved from becoming repetitive by awesome scenes like child-like Mike taking the bento shop’s elementary-aged daughter—who’s upset at having moved away from all her friends—around the market and pointing out everything that makes it awesome. Mike naturally knows just what to say to make a kid feel comfortable and interested, and by the end of their journey, a layer of subtle screentoned sparkles conveys how thoroughly Mike has brought the magic of the place to life for this unwilling transplant. It kind of made me verklempt.

The first volume focused primarily on Mike and her best friend, Kuro, and while I like both of them a lot, I was hoping future volumes would spend more time with their friends. Alas, that is not to be, as there’s a fair amount of material here about Mike and Kuro’s relationship and how Mike is utterly oblivious to the fact that Kuro is in love with her. Although she would say she knows nothing about love, she still refuses to lose Kuro to anything, be it another school, another sports team, or another girl. It’s a little frustrating that Kuro doesn’t just tell her already, but perhaps he’s waiting for her to be not quite so dense first.

Another aspect of the story that is both good and bad is the propensity of adults to comment on the kids’ friendship. When Kei-san, the owner of the flower shop, tells Mike, “There’s nothing that doesn’t change,” it works. I am a sucker for bittersweet nostalgia, and moments like these imply that perhaps the kids will drift apart despite their pledges not to let that happen. However, when even random passerby feel the need to call out, “Just how long do you think it’s gonna last? Forever?” then it becomes a bit much.

In the end, The Stellar Six of Gingacho is a series that may look a little generic on the surface, but has a special charm all its own.

MELINDA: I *really* enjoyed the first volume of this series and I’m quite excited to read this one, even taking into account your few caveats. I, too, had hoped that we’d see more of Mike’s other friends in future volumes, though it certainly helps that I really *like* both Mike and Kuro, so it’s not like I’ll be sad to see more of them. And the scene you describe with Mike and the little new girl sounds absolutely delightful.

Has your enthusiasm for the series waned at all after this volume?

MICHELLE: Not a bit! At first I might’ve been a little, “Oh, here we go again” regarding the neighbor-helping, but when I later ended up a mite sniffly I put aside all my doubts. This one’s a keeper.

Can you say the same for your next book? 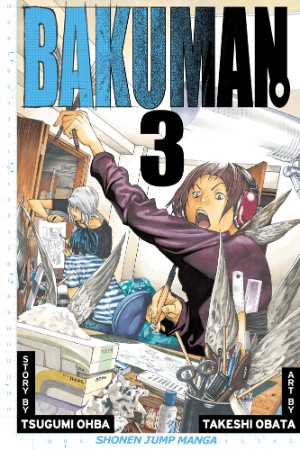 MELINDA: You know, I think I can. This week, I checked out the third volume of Bakuman, Tsugumi Ohba and Takeshi Obata’s tale of aspiring teen mangaka. This series has taken a beating from bloggers (occasionally including me) for things like sexism, lazy romance, and an unrealistic setup for the teens’ entry into the industry. Still, I named it one of my top two new shounen series for 2010, and this volume actually cements that decision in my mind.

Though Mashiro and Takagi have now experienced some success with a third-place one-shot in Akamaru Jump, their next step brings them mostly frustration, and even puts them at odds with their editor, who doesn’t believe that trying to create something mainstream is the right move for them at all. Personally, things are becoming strained as well, as Takagi starts spending more time with his girlfriend and Mashiro takes a position as an assistant to a rival artist.

Usually my favorite part of a story is where everything goes wrong, and this is where we are now (at least for the moment) in Bakuman. I’m especially pleased that Ohba and Obata are able to balance the typical shounen perseverance with some real doubt and bitterness as well. Though it seems unlikely that our heroes will remain apart for long, their separation doesn’t feel forced at all, and there are some hard realities for both of them to face here.

Reduced presence of Mashiro’s awkward romance is definitely a plus in this volume, with extra points for the prevalence of Takagi’s, which is actually pretty interesting to watch. One of this volume’s strong points, too, is some extended screen time for their eccentric rival, Eiji Nizuma, who is possibly my favorite character in the series at this point.

Most of all, however, I’m still really enjoying this look at the fairly calculated world of Jump, alternately inspiring and chilling, whether that was the authors’ intention or not.

MICHELLE: I really like Bakuman, even though I have totally complained about the things you mentioned, so the developments in this volume sound quite welcome. Like you, I find the insight into the workings of Jump to be the very best thing about this series. I suppose it’s too much to hope that Mashiro realizes that his arrangement with his sort of girlfriend is really stupid.

MELINDA: Probably, though I’m finding it much less distracting at this point, so perhaps we can hope that it might actually become interesting?

MICHELLE: I suppose there is at least a small chance that might happen!

MELINDA: We live in hope.

MICHELLE: Hey, is that a Rutles reference?!

MELINDA: Not deliberately, but it could have been! :D

Tune in next week for this month’s BL Bookrack, and then again the week after for an all new Off the Shelf!