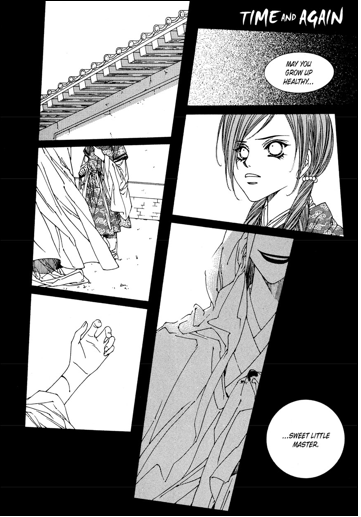 There’s little to report in the manhwa blogosphere this week, a state of affairs I’ll address in just a moment, but first, let’s take a look at this week’s duo of reviews. First, at Manga Xanadu, Lori Henderson checks out the September issue of Yen Plus (Yen Press), now available online for the low, low price of $2.99 a month.

Three manhwa titles currently run in the online magazine, JiUn Yun’s Time and Again, JinHo Ko’s Jack Frost, and MiSun Kim’s Aron’s Absurd Armada, a Korean webtoon just recently added to Yen’s catalogue. Of these, Lori considers Time and Again the only must-read, though Aron’s is beginning to please. A few tidbits from her review:

“First up is Jack Frost, a title I haven’t been impressed with over the last three volumes … This chapter follows the routine that Jack Frost seems to have set up. Talking heads, panty shot, fight; lather, rinse, repeat. It would be nice to see that routine shaken up a bit. Many less panty shot and more plot? …

“I think Aron’s Absurd Armada is starting to grow on me. This month featured Ronnie, the girl they rescued last issue … It’s a good quick read …

Time and Again is one of the titles that made subscribing worth it. In this month’s chapter, we get to see into Baek-On’s past … This was the best chapter of the magazine, behind Nightschool. It was rather heartbreaking to finally see the truth.”

On the subject of Yen Press, Charles Webb takes a look at volume three of Jack Frost over at Manga Life.

Aaaaand that’s it for manhwa news this week, which brings me to the whining portion of this post. There’s been a dearth of manhwa-related activity online recently, and with the relatively sparse release schedule we’ve seen from most of the publishers who bring us manhwa, this can hardly be a surprise. It’s been nearly a year since I began the Manhwa Monday feature at Manga Bookshelf, and though we’ve seen quite a few series come to conclusion during that time, the loss has been balanced by very few new releases.

Even Yen Press, whose acquisition of Ice Kunion’s original catalogue has made them the most consistent publisher of (print) manhwa in English, has only begun three new series in 2010–One Fine Day, Laon and now Aron’s Absurd Armada (yet to reach print). Aside from There’s Something About Sunyool, NETCOMICS has been nearly dormant. DramaQueen’s brief revival with volume one of The Summit has seen no further activity to my knowledge. Udon’s series, Apple notwithstanding, remain on hiatus. Dark Horse has begun nothing new. Tokyopop??? And with the exception of Fanfare/Potent Mon’s Korea As Viewed By 12 Creators, the mid-season poll conducted here in June is still an accurate representation of new releases this year.

So what gives? Is the manhwa slowdown just an inevitable symptom of the industry’s woes overall, or is there something else at work?

I know that this blog’s readership consists mainly of manga fans, a group that has not been entirely welcoming of manhwa as a whole. Yet every week, as I search for content for this column, I slog through Google alerts filled with reviews and discussion of scanlated manhwa, so clearly it’s being read and enjoyed. Is it just that nobody’s buying?

So, in an entirely unscientific fashion, I invite–nay, plead with you, dear readers, to respond with a comment to this post if you actually buy manhwa (and if you don’t, feel free to tell me why). And while you’re there, why don’t you take the opportunity to talk about some series you’d like to see licensed!

That has been the end of my whining for the week.