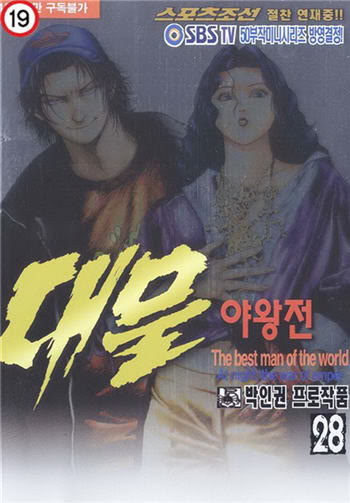 With so little manhwa currently available in English, fans have long realized that one of the best ways to preview some of what we’re missing is by checking out the plethora of Korean dramas available for streaming at sites like Crunchyroll and DramaFever, many of which are based on popular manhwa.

While the vast majority of manhwa currently published in English fall into just one or two primary genres, the range of K-dramas available to English-speakers is much, much broader, offering us a more balanced representation of what’s actually available in Korea.

For this reason, many manhwa fans not only keep up on currently running K-dramas, but also those in production. One example is the upcoming series, Daemul (대물), based on the manhwa by In-Kwon Park, about a woman who becomes South Korea’s first female president and her relationship with a male escort.

K-drama blog Dramabeans has been reporting on the series’ progress from the start, and though excitement was high early on, new promo photos have begun to indicate that the drama may not quite maintain the reportedly dark tone of the manhwa series.

When Daemul was first announced, I was pretty excited about it, particularly the more I read up on its source material. It seems the manhwa is pretty dark and flirts with racy topics … It seemed like a mature, adult story that could be quite interesting … Add political intrigue, conspiracy plots, and a thriller vibe, and we’ve got some interesting dynamics in play.

Before the drama airs, I can’t say for sure what the tone will be like, but the fact that it evokes none of that abovementioned stuff leads me to wonder just how whitewashed the story has become.

Even if the drama does prove to be a watered-down adaptation, as a manhwa fan, I just find myself wishing that someone would license a manhwa like this over here. I guess we’ll wait and see.

In other news, ANN reports that the South Korean government has released a piece of manhwa propaganda in an attempt to quell distrust among the nation’s youth. For more, check out the Bloomberg report.

Aspiring webtoon publisher iSeeToon has reported in their blog that they are delaying their launch until October.

At ComicBitsOnline, Terry Hooper laments the increasingly stunted efforts to bring manhwa and manhua to the UK.

This week in reviews, Michelle Smith takes a look at recent volumes of Sarasah (Yen Press) in last week’s Off the Shelf column at Manga Bookshelf. And at Manga Xanadu, Lori Henderson checks out the final two volumes of You’re So Cool (Yen Press).