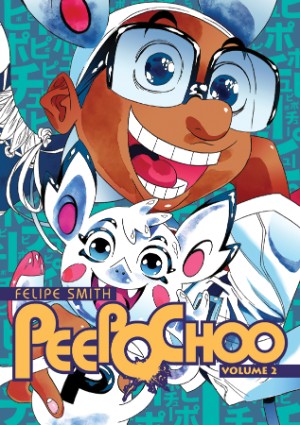 This was actually on Comicopia’s list last week, but it wasn’t until this week, when I received my copy of volume two in the mail that I realized just how much it needed to be a Pick of the Week. I’m talking, of course, about the second volume of Filipe Smith’s Peepo Choo.

I rarely quote back-cover copy, because I usually think it misses the point. Vertical’s blurb on the back of this volume, however, is completely spot on:

“Originally serialized in a comics monthly issued by Japan’s premier publisher, Filipe Smith’s exuberant satire rips a new one in the fabric of trans-Pacific understanding, sparing neither the Japanese mafia nor American manga licensors. The ugly truth about the eponymous anime is revealed in this second of three volumes of shrink-wrapped excellence.”

And “excellence” it is. I’ve had some trouble reviewing the first volume of the series. Though the seeds of a strong story all seemed to be there, I felt that Smith was not quite able to follow through. With the release of volume two, everything has changed. Suddenly it’s clear what story Smith is really telling, and he’s telling it very, very well. Though the real-life industry personalities Smith is skewering pass this manga n00b right by, his point does not. Expect more on all of this in my upcoming review!

Please note, this series is rated 18+, and is not for the squeamish. Some of its gross-out moments have been a bit much for me, I’ll admit, but the payoff is well worth it.

Check out more on the series at Vertical’s website, or simply buy this book.