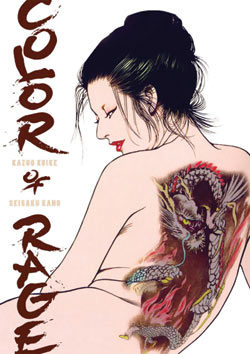 When reading historical manga, I grant the artist creative license to tell a story that evokes the spirit of an age rather than its details. What rankles my inner historian, however, are the kind of anachronisms that result from sheer laziness or paucity of imagination: modern slang, gross disregard for well-established fact. Alas, Color of Rage is filled with the kind of historical howlers that would make C. Vann Woodward or Leon Litwack gnash their teeth in despair.

The story begins in 1783. Off the coast of Japan, a whaling ship sinks in turbulent seas, claiming the lives of all but two crew members: George, a Japanese man, and King, an African-American slave. The two wash ashore, cut away their shackles, and set out in search of a community where they can live peacefully — no small challenge, given how conspicuous King is among such a homogenous population. Of course, this being a manga by Kazuo Koike, George and King’s journey is anything but picaresque, as they bump up against the vigorous defenders of Edo-era status quo: ruthless daimyo, yakuza thugs, samurai-for-hire.

For such a far-fetched premise to work, its principal characters’ thoughts, words, and actions need to make sense in historical context, yet George and King behave like modern action heroes deposited in feudal Japan, not products of the eighteenth century. During scenes of limb-severing carnage, for example, they banter with the consummate skill of Harrison Ford and Will Smith, pausing occasionally to deliver speeches about finding a place where “color doesn’t matter” — a noble sentiment, to be sure, but one cribbed from a Civil Rights speech circa 1964, not an eighteenth century abolitionist’s tract. A similar sense of historical amnesia informs another scene in which King declares that conditions are worse for Japanese peasants than for slaves in the American South, leaving me to wonder how a slave working on a colonial plantation would have any comparative basis for making such an assertion or, frankly, any notion of the “American South,” given that the Revolutionary War was still in full swing at the time King was gang-pressed into whaling. Other historical oversights abound: how did a Japanese man end up in the galley of an American whaling ship? Where did George learn to speak fluent English? Who taught King to handle a sword? And so forth.

The bigger problem, however, is that King entertains notions of race, class, and gender that would have been as alien to American colonists as they were to Japanese farmers and overlords. His blind commitment to addressing inequality wherever he encounters it — on the road, at a brothel — leads him to do and say incredibly reckless things that require George’s boffo swordsmanship and insider knowledge of the culture to rectify. If anything, King’s idealism makes him seem simple-minded in comparison with George, who comes across as far more worldly, pragmatic, and clever. I’m guessing that Koike thought he’d created an honorable character in King without realizing the degree to which stereotypes, good and bad, informed the portrayal. In fairness to Koike, it’s a trap that’s ensnared plenty of American authors and screenwriters who ought to know that the saintly black character is as clichéd and potentially offensive a stereotype as the most craven fool in Uncle Tom’s Cabin. By relying on American popular entertainment for his information on slavery, however, Koike falls into the very same trap, inadvertently resurrecting some hoary racial and sexual tropes in the process.

Koike’s treatment of female characters, like his handling of racial issues, can be downright ugly. In a valiant effort to head off feminists at the pass, the editors acknowledge Koike’s propensity for writing “samurai-era yarns with a certain sense of chauvinist violence and pulpy sexiness.” Now I’m all for “pulpy sexiness” — doesn’t that sound like fun? But the casual mingling of sex and violence in Color of Rage crosses the line from mere chauvinism to outright misogyny. The nadir is a scene in which King strips a woman naked and crams dirt into her mouth until she chokes. Her crime: being turned on by the sight of King’s big, strapping body (which, I might add, artist Seisaku Kano treats as a kind of fetish-object throughout the book). Richard Wright might have known how to make the moment horrific, tragic, and peculiarly just, but someone as ill-versed in American history as Koike does not. The result is an uncomfortable mixture of kink and racism that hints at the story’s 1970s roots; one wonders what, exactly, Koike had read or seen to inspire such a florid racial fantasy.

The artwork is a hodgepodge of styles and techniques. The best pages appear to be done in charcoal or pastels, and have the soft edges and expressionist lighting I associate with fin-de-siecle modernists such as Käthe Kollwitz. The opening scene, in particular, is beautifully rendered, a harrowing sequence of wordless, slightly abstract panels that reveals how George and King survived their maritime ordeal: 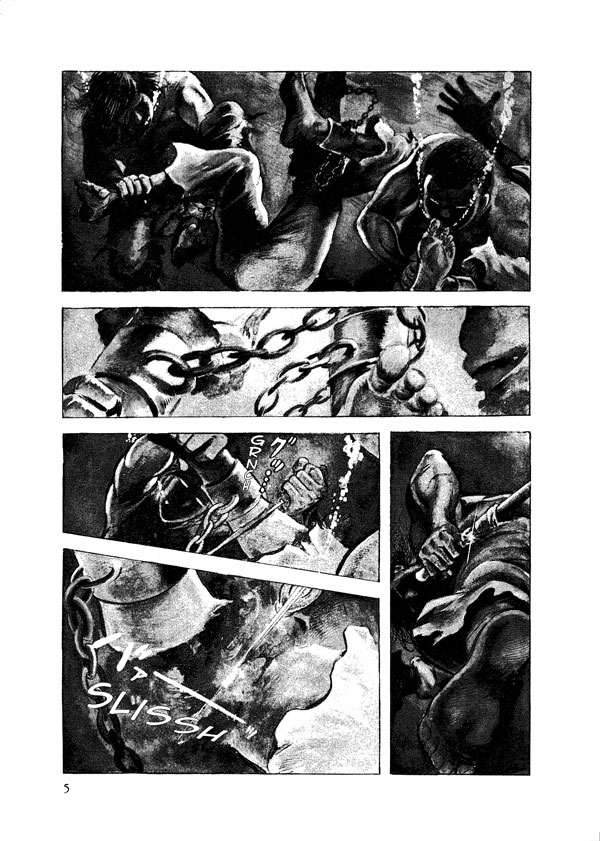 Most of the art, however, looks like homage to Goseki Kojima’s work on Lone Wolf and Cub, Samurai Executioner, and Path of the Assassin — not a bad thing, given Kojima’s superb draftsmanship and penchant for drawing memorable mugs. Seisaku Kano’s character designs are fine, but his fight scenes are poorly composed, a riot of swords, guts, and bodies in motion that fail to give the reader a clear picture of what’s happening. That might be an OK artistic choice once in a while, perhaps to suggest the chaos of hand-to-hand combat, but as the dominant mode of depicting action it soon grows tiresome, leaving the reader feeling more pummeled than entertained.

Though some of these criticisms could be leveled at Koike’s other work — Lady Snowblood, Crying Freeman and, yes, Lone Wolf and Cub — Color of Rage lacks something common to the aforementioned manga: a sense of play. Koike never takes himself too seriously in these other works, even when the plot takes a dark turn or two. In Color of Rage, however, his sincerity proves his undoing, as he tries to insert a noble black character into a world of vicious overlords and amoral samurai. King’s high-minded speeches and interventions clash violently with the story’s “pulpy sexiness” (for want of a better term), producing something that’s neither dramatically compelling nor fun to read. Die-hard Koike fans may feel the completist’s urge to buy Color of Rage — especially since Dark Horse has given it such a deluxe treatment — but casual readers will find much less here to love.

This is a revised version of a review that originally appeared at PopCultureShock on 5/14/2008.