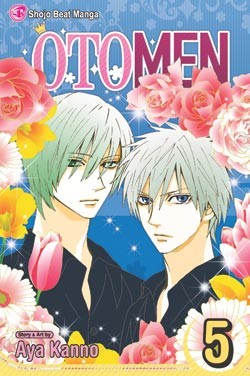 As the volume opens, Ryo’s class nominates her as their representative for the yearly “Ideal Woman Contest.” To win, Ryo must compete in such “womanly” arenas as cooking, flower arrangement, and proficiency with the tea ceremony, none of which are remotely her strengths. Furthermore, her prime opponent is a two-time winner of the title who has a crush on Asuka! What is Asuka’s definition of the “ideal woman?” Can his affections be be swayed by a beautifully crafted bento? Also in this volume, winning a prestigious shojo manga award threatens Juta’s anonymity and the “Beauty Samauri” return, this time to the small screen!

Though this series remains as charming as ever, lack of significant character development is beginning to take its toll. Any real potential for a shift in the characters’ daily machinations (such as the threat of Juta being outed as a mangaka or Asuka as an “otomen”) is thwarted before it can make any visible waves, chapter-to-chapter. The one exception here is Ryo, who seems to be coming into her own as a capable, much-admired young woman, without being required to gain any traditionally feminine skills.

Despite the series’ sitcom-like stagnation, it is genuinely heartwarming to have its primary message confirmed ad infinitum, both in Ryo’s rising confidence and Asuka’s inner commitment to the things he loves most. “This is like a dream, isn’t it?” Asuka says to fellow Beauty Samauri (and secret make-up artist) Tonomine as they contemplate the freedom they experience only in costume. “We’re boldly revealing our interests and skills to everyone.”

Though “boldly” seems like a strong word for “openly, while in disguise,” Asuka’s feeling of liberation is obviously genuine and it’s hard to get picky about semantics. His sincere excitement is a strong reminder that, despite the series’ broad humor, the characters’ core conflicts are actually quite real and not likely to be resolved with a single grand gesture or event, no matter how earth-shattering.

With that in mind, perhaps it is too early to be frustrated by sluggish character growth. Does mangaka Aya Kanno have more in store for her characters than what immediately meets the eye? Events in the final pages of this volume do provide some hope in this area, supplying more than enough reason to stick around for the next volume. Until then, we can surely dream.