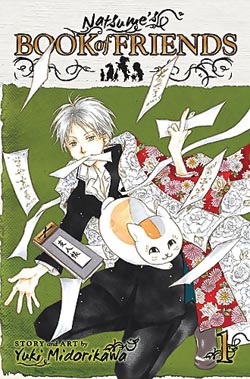 Teenaged orphan Takashi Natsume has spent most of his life passed around from relative to relative, each anxious to be rid of him thanks to his habit of talking about things they can’t see. As it happens, Takashi is able to see spirits (yokai), an ability he inherited from his grandmother, Reiko. He also inherited the innocuously named “Book of Friends,” a book Reiko used to write down the names of yokai, effectively enslaving them to her every command. Now living with distant relatives near the home where his grandmother grew up, Takashi begins to encounter the many yokai she bullied over the years. Desperate to claim the book for themselves, the yokai first appear simply as enemies, but as Takashi discovers what it is they’re really after (thanks to an uneasy alliance with a cat-shaped demon he accidentally frees from its protective ward) he becomes determined to give them back their names. Word spreads, and soon the yokai are seeking him out, most with the purpose of gaining their freedom, though not all are so benign.

This story is a pleasant surprise on all counts–art, characterization, storytelling–providing something much more charming than I would have gathered simply from its PR material. It possesses a sort of xxxHolic meets Mushishi vibe I’d hoped for (but never found) in Tokyopop’s Tactics, which is not to suggest that it lacks its own unique charms. This volume is charming from start to finish, thanks to Takashi (whose good heart shines even as he faces rejection from family and peers) and the spirits he meets along the way, ranging from downright adorable to genuinely frightening.

The chapters are fairly episodic, each introducing a new spirit who has come to retrieve his or her name from Reiko’s book. Some especially poignant stories include that of a yokai who spent his life in a shrine, worshiped by locals as a god, now reduced to the size of a tiny doll as his worshipers have dwindled to one. His devotion to the last old woman to continue to offer respects is unexpectedly touching. Another especially moving story is that of a spirit (once a swallow) who attaches herself to Takashi in hopes of catching a glimpse of a human who once comforted her years ago. It is Takashi’s own loneliness that allows him to understand the feelings of these yokai and it is through his experiences with them that he learns the value of connecting with others. “Man and beast…even yokai… they search for that connection,” he says to himself at the end of the volume. “I love their fervent striving.” An emerging subplot involving another student at Takashi’s school promises more through-story as the series continues, which is something I’ll definitely look forward to.

This series is touching and even solemn in its treatment of both humans and yokai, but not without humor. Takashi’s supernatural companion, for instance (whom he refers to as “Nyanko-sensei”) is not a warm, fuzzy yokai by any means and only stays with Takashi because he’s been promised the “Book of Friends” should Takashi die before returning all the names. Yet he spent so many years trapped in the form of a Lucky Cat that he has taken on the form himself, much to his dismay. Several of the story’s characters, in fact (such as a couple of trickster yokai who at one point insist on becoming Takashi’s entourage) exist mainly to provide comic relief, but what makes the humor really work in this series is that it is never there purely for its own sake.

Yuki Midorikawa’s artwork is understated and perhaps nothing special, but she manages some beautiful imagery at just the right moments. There is a genuine feel to the story’s yokai, bringing a traditional sensibility into this modern story, much as the modern dress of Mushishi‘s Ginko does the reverse for its nineteenth-century setting. I particularly enjoy Midorikawa’s imaginative and intuitive panel layouts which are especially effective in terms of pacing.

Though many elements of its story are well-trodden territory in girls’ supernatural manga, Natsume’s Book of Friends brings a quiet thoughtfulness to the genre more characteristic of adult series like Mushishi or delicate shojo romances such as We Were There. An unexpected treasure among recent Shojo Beat titles, Natsume’s Book of Friends is definitely a series to keep an eye on.