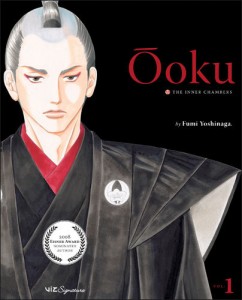 Built in 1607, the Ooku, or “great interior,” housed the women of the Tokugawa clan, from the shogun’s mother to his wife and concubines. Strict rules prevented residents from fraternizing with outsiders, or leaving the grounds of Edo Castle without permission. Within the Ooku, an elaborate hierarchy governed day-to-day life; at the very top were the joro otoshiyori, or senior elders, who supervised the shogun’s attendants and served as court liaisons; beneath them were a web of concubines, priests, pages, cooks, and char women who hailed from politically connected families. This elaborate social system was mirrored in the physical structure of the Ooku, which was divided into three distinct areas — the Rear Quarters, the Middle Interior, and the Front Quarters — each intended solely ladies of a particular rank. The only male permitted into the Ooku (unescorted, that is), was the shogun himself, who accessed the “great interior” by means of the Osuzu Roka, a long corridor that connected the shogun’s living quarters with the imperial harem.

The “great interior” plays a prominent role in Fumi Yoshinaga’s latest series, Ooku: The Inner Chamber. In Yoshinaga’s alternate history of eighteenth-century Japan, however, women run the show, thanks to a devastating plague that killed most of the country’s men. The shogun’s duties remain unchanged by this unexpected gender reversal, and she, too, enjoys the same perks that her male predecessors did. The twist: the Ooku is now home to hundreds of handsome men from important families, all of whom live according to the code established in Hideata Tokugawa’s reign.

Perhaps the most astonishing thing about Yoshinaga’s conceit is that so much remains the same, despite the sudden challenge to established gender norms. Marriage practices remain firmly rooted in money, social status, and fertility (men’s fertility, that is); palace residents continue observing the established pecking order and its attendant rituals; the shogun questions the cost, but not the necessity, of the Ooku itself. The men, in fact, embrace their subordinate roles without hesitation; their petty squabbles, hazing rituals, and political jockeying suggest their inability to imagine anything more important than competing for the shogun’s attention.

Where Yoshinaga takes the most risks is in her portrayal of Yoshimune, the newly appointed shogun. Yoshimune is a rare type in popular entertainment: a strong, intelligent, brusque, and frankly carnal woman with uncanny leadership instincts. She’s dismayed by excess and ritual, which she views as a drain on the shogunate’s dwindling resources; in her personal and political decision-making, she strives for simplicity and efficiency, even going so far as to restrict herself to two meals a day. In true Tokugawa fashion, Yoshimune is wary of the outside world; in one of the volume’s best scenes, she receives Dutch ambassador dressed in male attire, then uses her throne as a bully pulpit to inquire about the all-male crew of his ship. “‘Tis reported that  there is not one woman in your entire company. Wherefore is that?” she demands of the bewildered captain. “Are all the women of Holland weak and sickly?”

Like Yoshinaga’s other costume dramas — especially Gerard and Jacques — Ooku is very talky. Too talky, in fact; the first three chapters unfold at what might charitably be described as a glacial pace, as we watch a young samurai enter the Ooku to avoid a financially beneficial but emotionally sterile marriage. Normally, Yoshinaga excels at conversation-driven storytelling, but the dialogue in Ooku falls flat, thanks to a stilted script that’s liberally peppered with “thees,” “wherefores,” and “forsooths.” (One character angrily addresses another as “thou vile cur!”, an insult that last carried weight in Elizabethan England, while another makes reference to a “man’s nether hole.”) Without an intimate knowledge of Japanese, it’s impossible to know if the problem originates with Yoshinaga’s script or Akemi Wegmuller’s translation; either way, the dialogue’s awkward marriage of contemporary and archaic language proves distracting, keeping the reader at arm’s length from the characters’ feelings.

The other problem with the script is that Yoshinaga uses conversation to explain everything, from the mysterious origins of the redface pox (the fictional disease that kills off the male population) to the elaborate rituals observed within the Ooku. Too often, the script reads like a history textbook; characters don’t have a discussion but lecture one another, revealing little about themselves in the process. Yoshinaga pauses from time to time to stage a dramatic moment — an attempted rape, a sword fight, a lovers’ parting — but she never quite brings the Ooku to life; the first few chapters feel more like a pageant or a historical re-enactment than a drama.

Yoshinaga’s artwork, on the other hand, is elegant and effective, capturing the opulence of Tokugawa-era fashions as well as the austere beauty of Edo Castle. As with all her manga, Yoshinaga’s limited repertoire of character designs seems less a flaw than a charming idiosyncrasy, as if she’s employing the same troupe of actors again and again. Yoshimune, for example, strongly resembles Flower of Life’s Majima, yet Majima’s sharp profile suits Yoshimune perfectly, as do the determined gait and fierce stare that distinguish Yoshimune from the softer, more stereotypically feminine women in her orbit. In service of Flower, those physical characteristics made Majima seem like a shifty operator, but when re-purposed for Ooku, these traits endow Yoshimune with an almost god-like aura, suggesting both her discipline and her strong sense of purpose.

I’ll be honest: I’m not quite sold on Ooku yet. For all its dramatic and socio-political ambitions, volume one isn’t nearly as daring or weird or pointed as it might have been. If anything, it reminds me of a BBC miniseries: it’s tasteful, meticulously researched, and a little too high-minded to be truly compelling. The introduction of the complex Yoshimune, however, bodes well for future volumes, as she brings a sense of urgency and purpose to a script that sometimes meanders.