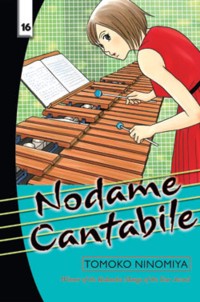 Auditions for open positions in the Roux-Marlet Orchestra continue in this volume, leading up to rehearsals for Chiaki’s first official concert as resident conductor. Under pressure to restore the orchestra to its former glory (and halt the alarming flood of subscribers leaving the Roux-Marlet for rival orchestra Deschamps), Chiaki drastically increases rehearsal hours and unleashes his unforgiving perfectionism on the ensemble, earning some heavy grumbling from its members. Meanwhile, pianist Rui returns to Paris seemingly at loose ends, oboist Kuroki struggles to balance school with his new professional position, piano student Tanya proudly displays the fruits of her post-illness diet, and Nodame tries hard to play the perfect conductor’s “wife” while keeping up with her own studies.

While this series’ classical music setting is always enjoyable and informative (this volume, for instance, contains discussion on the differences between the French bassoon and German fagott), its true charm is in its wonderfully quirky characters, particularly obsessively correct Chiaki and uniquely whimsical Nodame. It makes sense somehow that Nodame is addicted to natto (after eating which, Chiaki will not kiss her), believes that putting on a hairband successfully disguises her as a manga character (“I thought I was in disguise. I was trying to be Yawara-chan.”), and feels that free tissue boxes displaying Chiaki’s photo are the key to his orchestra’s marketing success. Some of the series’ supporting characters have great moments in this volume too, including bassoonist Paul who is determined to revive the bassoon in France’s orchestras and Rui, who unsuccessfully tries to get picked up in a lobby full of (according to her) gay men.

Now in its sixteenth volume, Nodame Cantabile manages to remain just as funny and touching as when it began. Readers craving a satisfying bite of rich, quirky josei simply can’t do better.