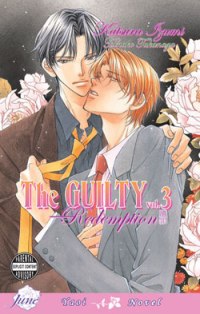 Toya Sakurai is a young editor of mystery novels for a struggling publisher who has just scored a huge success for his company with a new book from best-selling author, Kai Hodoka. What no one else knows is that while working on the project, Hodoka also became Toya’s lover through a bizarre series of pool games in which Toya paid for his losses with his body. Now that the book has been finished, Toya isn’t sure where he stands with Hodoka and is desperate to find out, but his timidity and Hodoka’s incommunicative nature keep getting in the way. Meanwhile, Toya begins work with a new, young author, Amano, whose straightforward manner and obvious feelings for Toya only make things more confusing. As these volumes continue, Toya struggles against his own insecurities to try to understand Hodoka’s feelings, while also battling a rumor about their involvement which forces the question of whether or not they should reveal their relationship publicly.

This series has so much potential to be fun, solid romance, but it is unfortunately dragged down repeatedly by the rather appalling treatment of Toya’s sexuality and his physical relationship with Hodoka. Most of their frequent sexual encounters read like assault, with Toya begging for relief from Hodoka’s sadistic treatment of him. Though it is clear that Toya truly desires Hodoka and even initiates their encounters from time to time, these scenes are irrevocably tainted by Toya’s constant feelings of shame and humiliation, which Hodoka encourages and obviously enjoys. Late in the third book, Hodoka actually rapes Toya outright, purportedly to give Toya a much-needed reason to break up with him. The fact that this ultimately is explained away as an act of kindness is fairly shocking by itself, but what’s most disturbing is that this scene is not appreciably different from most of their other sexual encounters, aside from Toya’s use of the word “rape.”

The most distressing element of all this, however, is the author’s emotional and physical portrayal of Toya. Having discovered his own sexuality after years of simply feeling no real attraction to anyone at all, it is understandable that he would be confused by his own emotions and desires, and perhaps even believe that he should be ashamed of them. What’s appalling is that this point of view seems to be shared by the author, who not only spends a great deal of time describing in detail how Toya’s manhood is degraded by his desire, but actually treats him as though he is equipped with female genitalia and experiences the physical responses that go with it. It is difficult to decide whether this is more demeaning towards Toya or to the series’ female readers, but either way it is deeply unfortunate.

Regrettably, these problems dominate what would otherwise be a nicely engaging romance series. Toya is an immensely relatable character, struggling to balance career success with romance for the first time in his life. As he juggles his shaky affair with Hodoka along with young Amano’s feelings for him, he realizes too late that his fear of conflict and desire to be kind to everyone may actually result in a great deal of hurt for others–an important but painful lesson too often ignored by most people. Hodoka, too, is quite a poignant character, obviously deeply damaged by his past, and though early on it is difficult to understand why Toya would stay with him when sweet, open Amano is right there waiting in the wings, over time it becomes clear how much good Toya and Hodoka might do for each other, if only they stayed out of the bedroom. Near the end of the second volume, Hodoka begs Toya to teach him how he wants to be loved, and for one shining moment it seems possible that he might learn real tenderness and help Toya to shed his shame over his own body, but by the end of the third volume this hope remains sadly unfulfilled.

Ultimately, The Guilty offers some nice characterization and real emotional depth. Unfortunately it is not enough to balance out the uncomfortably humiliating sex scenes or homophobic self-loathing of the series’ protagonist.