Just a couple of quick notes! First of all, I have a new review up at Comics Should Be Good, for xxxHolic volume 13 which I loved very much (Reprinted here after the demise of CSBG). Oh Watanuki and Doumeki, I die. I die. Please check it out and let me know what you think!

Also, I’ll be spending some of the next few days at Smith College’s ConBust, a local sci fi, gaming, and anime convention with a special focus on female fans and creators. I’m really looking forward to seeing what they have to offer!

A question to fellow WordPress users: Have any of you noticed a lot more spam making its way past Akismet lately? Is it just me?

That’s all for the moment! 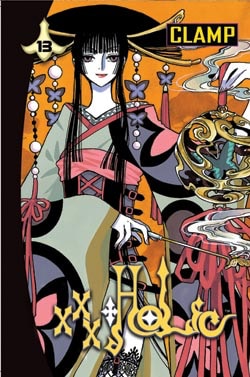 In volume twelve, Watanuki’s world began to crumble, as he was pulled from dream to reality and back to dream, without ever being entirely sure which was which. This continues in volume thirteen, but having been reassured that he is at least still human, Watanuki is coming to terms with his new fractured reality, determined to do his best by those who inhabit it whether any of it is real or not. “This may all be just a dream,” he says to himself in the first chapter. “But to me this is my everyday life! It’s important!” His new outlook gives him a fresh appreciation for the time he is able to spend with those he cares about, and he even seems prepared to place Doumeki in that category.

Presented with the news that young Kohane is being harassed for supposedly giving false spiritual readings on television, Watanuki is determined to find her and show his support. Along with Doumeki, he sneaks into the television studio where she is taping just in time to save her from being struck by her mother, whose determination to maintain Kohane’s success as a medium has finally pushed her off the deep end. After a painful confrontation, they bring Kohane back to Yuuko’s shop, where Kohane will finally make a wish.

One of the most poignant things in this series so far has been the nurturing relationship that has developed between Watanuki and Kohane, and in this volume it becomes clear just how much this has affected both of them as people. Having someone to care for and protect has brought out the very best in Watanuki, and being cared for and protected has finally brought happiness within Kohane’s reach. There is a moment at the television studio where Watanuki allows himself to be struck by Kohane’s mother (much to Doumeki’s dismay), and though it has been typical of Watanuki to sacrifice himself for the sake of others, even when doing so actually hurts them more, in this case his choice to do so demonstrates a newfound maturity and thoughtfulness. Learning to care for someone and be cared for, of course, can bring as much pain as it does joy, and Watanuki is finally prepared to open himself up to both.

Though Kohane’s arc dominates the volume, the most compelling story here is Watanuki’s own personal growth. This has been building gradually throughout the series (especially since volume eight), but in this volume it is made very clear just how far he has come. What’s most interesting about this, is that it has come hand in hand with the loss of so much of his past. With Watanuki’s memories eroding rapidly, he seems to have become more conscious than ever of the present, as well as the value of the few people whose names and faces have not yet faded from his mind. At the beginning of the volume, he and Doumeki encounter Himawari on the way to school, and it occurs to Watanuki that being able to meet her is precious, which he takes care to tell her. It is Himawari, however, who notices the biggest difference–that for the first time ever he does not protest her usual observation that he and Doumeki are friends.

There are so many ways to look at Watanuki’s transformation and everything that is happening around him. How much of his identity is inextricably tied to his memories? Can he create the best version of himself and his world simply by wishing for it? Is it shedding his past that allows Watanuki to fully become the man these people have helped him to discover? This volume offers more questions than answers, but it hardly matters when the whole thing is filled with scenes like this: 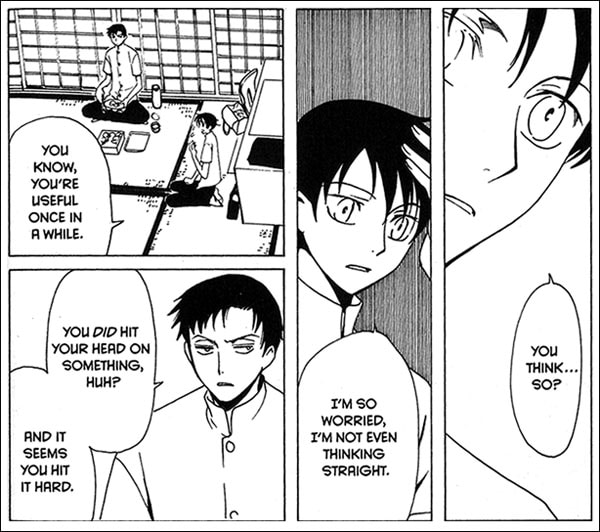 Even in a manga as complex and layered as xxxHolic, it is nearly impossible not to be just simply charmed by Watanuki and Doumeki’s reluctant friendship, especially now as it becomes more lighthearted and obviously genuine. Though the true extent of their purpose in each other’s lives has not been fully revealed at this point in the story, it is clear that for better or worse they are stuck with each other, and it is delightful to see Watanuki finally relaxing with that truth.

As in volume twelve, Watanuki’s dream sequences provide CLAMP with the opportunity to play with fanciful imagery, particularly with Yuuko’s butterfly theme, and some of the images are strikingly beautiful. Near the end of the book, too, as the volume’s most dramatic plot points are revealed, the art is both ornate and simply lovely, with charming details (like Kohane’s dropped sandal in the panel below) that make this supernatural setting feel so real. As always, the life and range of expression of these characters is part of what makes the storytelling so powerful, while the curling smoke in Yuuko’s shop keeps the atmosphere thick with suspense. 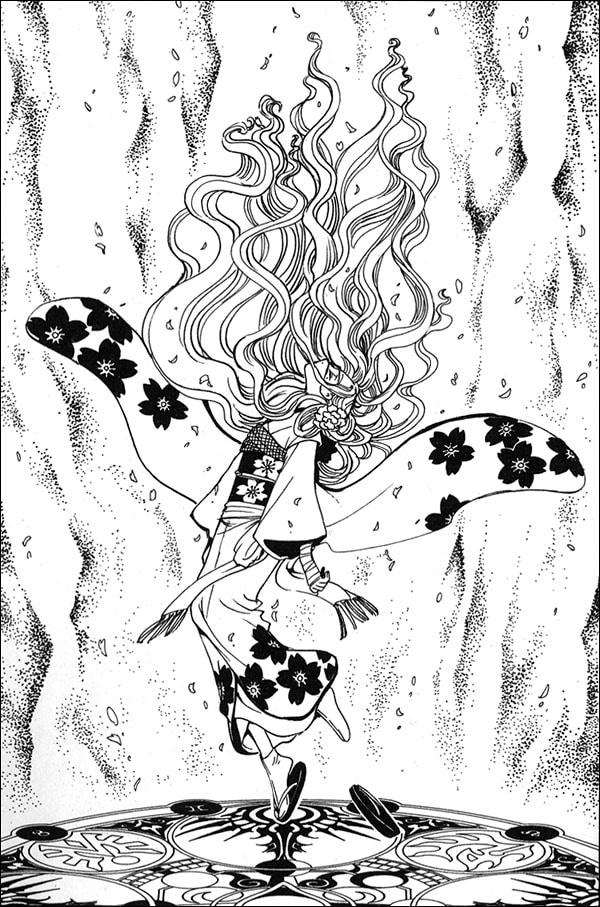 Del Rey does its usual fine job with this volume. The color pages at the beginning of the book are particularly nice in that they serve as a reminder of Watanuki’s physical bond with Doumeki, which comes in handy part way through after Watanuki loses his glasses to a dream. William Flanagan’s English adaptation provides a wonderful read, and since this volume contains relatively few Japanese cultural references that require explanation, he is able to use some of his endnote section to instead clarify action in the television studio that might otherwise lose meaning. 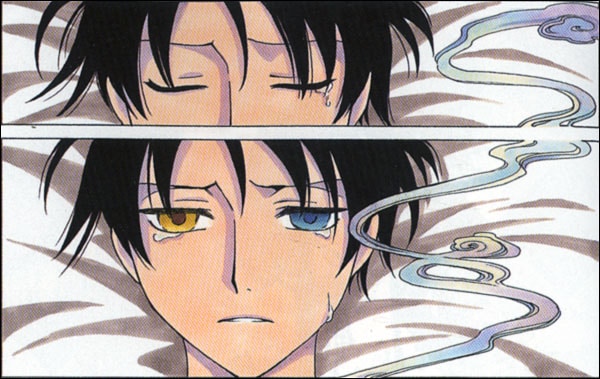 Like the previous few volumes, more and more the story is made richer by concurrent reading of xxxHolic‘s crossover series, Tsubasa: Reservoir Chronicle, and not just because it provides additional insight into the plot. Even characterization is enriched by reading both series, particularly as concerns Watanuki, Yuuko, and, interestingly, Mokona, whose personality is more fully (and delightfully) understood alongside his Tsubasa counterpart’s. Less openly affectionate and demonstrative than Tsubasa‘s Mokona (Soel), xxxHolic‘s Mokona (Larg) keeps his depths hidden under a blanket of teasing and dry wit, showing his true affection and concern only when it really counts. Soel and Larg are the inverse of each other in many ways, and watching their individual roles play out is a real treat.

On the surface, Kohane’s story seems like a digression from the series’ main plot line (though there is no way to know for sure), and since it makes up most of this volume, there is a sense that much of what happens here is tangential to the real drama that lies ahead. The real value of this volume, however, is in the character development, which is substantial. Though the volume will leave readers impatient for the next, what happens here is well worth savoring.

For an introduction to the world of xxxHolic, check out my post, Why You Should Read xxxHolic at There it is, Plain as Daylight.