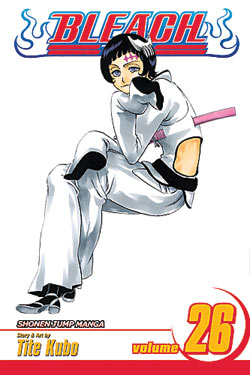 At the end of volume 25, after discovering former soul reaper Aizen’s true objective, tenth division captain Hitsugaya was asked to stay behind for someone who was waiting to speak with him. That person turns out to be his childhood friend, Momo Hinamori, and volume 26 begins with a quietly horrifying scene in which she begs Hitsugaya not to kill Aizen, certain that he must have had good reason for his murderous acts. As short and simple as this scene is, it starts things off very effectively, setting a tone of tense anticipation that continues throughout the volume.

Though this volume’s big drama is saved for the end, its middle chapters provide some rich moments, particularly concerning Orihime, who is told very bluntly by Kisuke Urahara that her combat abilities are too weak for her to play a role in the upcoming battle with Aizen, and that she’d do best to stay out of the way. Orihime has long provided the heart of this series and here, poised on the brink of discovering her true worth, she shines, lending a much-needed warmth to the grim battle preparations that make up much of the volume. Rukia, too, plays a very poignant role here, making the series’ primary female characters the real stars of this volume.

Heavy on characterization and plot development, this volume is a welcome respite for the battle-weary, as it anxiously works its way toward its cruel cliffhanger ending. The volume’s humorous moments work well too, especially a scene in which Yumichika and Rangiku argue about their zanpakuto, each unwilling to admit that the qualities they find most frustrating about them are actually the same as their own.

Though this volume offers very little action, its quiet warmth and tense anticipation make for a nicely satisfying read.